Jack Crawford has always had an “ends justifies the means” approach when it comes to catching killers. He’s never had any qualms about endangering Will, by putting either his sanity or life on the line in pursuit of the Chesapeake Ripper. So why should be think twice about dangling another piece of human bait in front of a bloodthirsty psychopath? In this case, the mark has to be a therapist willing to lend some legitimacy to Will outright taunting The Tooth Fairy in a Freddie Lounds Tattle Crime article.

In a great bit of editing, we are treated to a hard cut away from Alana refusing the obvious suicide mission over to Chilton having a temper tantrum in front of Hannibal’s glass cage. As a flagrant fuck you to Chilton, Hannibal published a journal article refuting the book Chilton wrote bolstering Hannibal’s insanity defense. Sure, the book was all lies, but that’s hardly the point. Chilton was simply aghast at how “quantifiably bitchy” Hannibal’s most likely unimpeachable argument was. Chilton drives another  nail in his coffin by threatening Hannibal’s pride, by painting an unpleasant picture of life in gen pop once Alana gets bored of playing jailer and fucks off to enjoy the Verger fortune. According to Chilton, gen pop involves prison rape and a lot of weeping over fruit. Also, there are no books. Dreadful.

If anyone was born to be a mark, it was Frederick Chilton. His ego, vanity and unrelenting thirst for prestige have always taken precedence over things like reason. He actually believes he has the upper hand while threatening Hannibal with throwing him to the ravenous wolves in the loony bin. As if Hannibal hasn’t eaten more worthy foes for breakfast. Hannibal does telegraph that with an underwhelmed shrug when Chilton asks if he is indeed Hannibal’s nemesis. His nemesis! Can you even imagine? He’s too busy getting set up by Jack and Will to be anyone’s mortal enemy.

Chilton complies with Jack’s plan by feeding a bunch of barely clinical affronts to Dolarhyde’s sexuality and masculinity to Freddie Lounds before posing for a picture with Will, designed to capture key landmarks and give away Will’s location. Unfortunately for Chilton, the hand Will places on his shoulder acts as a sort of Judas kiss, signaling to to Dolarhyde that this is someone else close to Graham that he should mow down.

Before long, Chilton is whisked away by the most menacing man to ever wear a silk bathrobe. Chilton may have owed Dolarhyde awe after he flexed his considerable muscle and revealed the full glory of his dragon tattoo, but we were already impressed with the Mrs Roper realness he was serving up with that glorious green housecoat. We’ve seen most of this imagery before in the various retellings of The Red Dragon, especially the grisly  “do you see?” slideshow and the image of a body getting lit up like a barbeque and let loose in a flaming wheelchair. The show already subverted canon with the Freddie Lounds crispy corpse Will murder fakeout from season 2, thus lighting up Chilton in this retelling, after Dolarhyde’s kiss pulled both lips off of his face. Unlike other retellings, Chilton actually survived the wheelchair pyre, at least long enough to hurl some venom at Will and reveal that Dolarhyde kidnapped Reba.

Chilton’s tenure on the show has consisted of a long, drawn out dismemberment. First, Hannibal removed parts of his colon and then Miriam Lass put a bullet right through his face, rendering an eye useless. Now Dolarhyde ripped his mouth off and torched his skin right off. In the unlikely event that this show ever sees a fourth season, Chilton will just return as a talking lung and a femur floating around in formaldehyde. Unfortunately, his lips won’t make it into the jar as Dolarhyde mailed them to Hannibal, who promptly ate one.

In the beginning of the episode, Hannibal asked Jack if he had a clean conscience after all his playing God and sacrificing other people in the pursuit of him. Even while looking at Chilton’s charred husk, he still has the resolve of a man who gets a full eight hours of sleep at night. And while The Great Red Dragon is obviously a concern, Hannibal points out that Jack should be concerned about Will.

“Hide us from the wrath of the lamb,” Hannibal tells Jack. “The lamb’s wrath touches everyone who errs. His retribution is even more deadly than the dragon’s.”

The lamb has already admitted to Bedelia in one of their icy and contentious therapy sessions that he sees his wife in place of the dead Jacoby and Leeds women. He sees himself killing Molly over and over again. He also saw flashes of shards of mirrors in Alana’s face. Bedelia points out that Hannibal has agency in the outside world through Will. Perhaps this is how Hannibal will end up killing Alana without even having to leave his cell.

“The seals are being opened, Jack. The Lamb is becoming a lion.”

In what will most likely be the final episode of the series, do we see Will finally submitting entirely to Hannibal’s influence. Does he, as Bedelia suggests, ache for him? 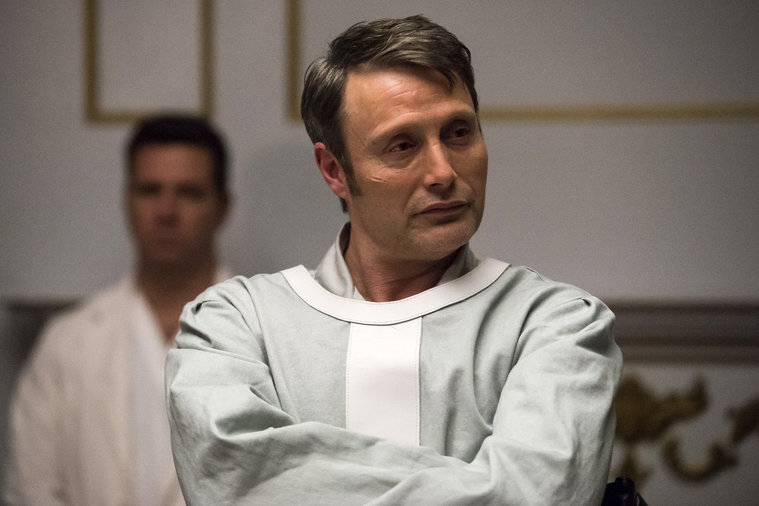