As you’ll recall, season 1 ended with a jumpsuited Will encased in glass greeting Hannibal with a clipped “Hello, Dr. Lecter.” “And the Woman Clothed in the Sun” begins with Will greeting the good doctor the same way, except this time, it’s Hannibal that encaged.

When Michael Mann shot this scene, the camera switched back from Bill Petersen and Brian Cox, framing each man with the cell bars as if to suggest that either Will or Hannibal could be locked up. The TV retelling of the Red Dragon storyline borrows a page from the Jonathan Demme playbook and shows Will reflected in the glass while Hannibal is talking and vice versa, suggesting that the two men ultimately complete each other.

No one is more aware of how much they complete each other more than Hannibal. He’s hurt by the formality with which Will addresses him, calling him Dr. Lecter. Hannibal’s never been big on boundaries, and now he lives a life confined by nothing but boundaries.

Part of the thrill of this episode is getting to revisit some of the great dialogue from Manhunter. However, when Brian Cox took shots at the atrocious aftershave Bill Petersen was wearing, he didn’t have the bitterness of a jilted ex-lover. Hannibal sounds more like an ex-wife than a disgraced colleague as he uses his unsettling smell sense to glean that Will moved on to a domestic life including a child.

“I gave you a child, if you recall.” Hannibal sniffs.

Of course, the child in question was the  teen Abigail Hobbs. We’re treated to a blood ritual scene that should have been soundtracked by George Michaels’ “Father Figure.” As touched upon by Chiyoh and Bedelia, the women in Hannibal’s life fall on a spectrum between participants and observer. In the scenes where Hannibal was nurturing Abigail under the guise of her death, Abigail was the most enthusiastic and active participant of them all, what with the whole slitting the throat of her father’s corpse as an exercise in self-love. It was illuminating to see what was going on while Abigail was hidden away all during the second season and it’s a shame she didn’t stick around long enough for Hannibal to teach her the harpsichord.

“Every family loves differently. Every family is unique,“ Hannibal said before lovingly presenting Abigail with her father’s cadaver.

Every family certainly is unique, just asked Alana. She ended up carrying the Verger heir and is raising her young son with Margot, who is still her partner even after the time jump. Despite the fact that she’s now flush with Verger cash, she’s still content to run the hospital for the criminally insane rather than retire and enjoy her cash and prizes.  No one ever really gets Hannibal out of their system, and that certainly applies to the women who holds the keys that lock the cannibal away from the rest of the world. However, Alana isn’t just content to encase the doctor in glass like a tiger at the zoo. She’s not going to be content until she robs the ex-lover who broke her body by robbing him of his dignity. She’ll take away his toilet if that’s what it takes. Even though the romantic moment between Alana and Will has long since passed, that doesn’t stop her from shaming Hannibal in regards to his calculated efforts to get inside Will’s head.

Despite Hannibal’s hurt feelings, he manages to put them aside for a moment to take Will through a stroll in his memory palace and opine about the Tooth Fairy’s predilection for killing under the moonlight and selecting families with spacious backyards.

Of course, Freddie Lounds sees everyone’s  relationship through a veneer of suspicion, what with Alana getting rich off of the Verger estate and then passing on a plush respite from the death penalty on to Hannibal. She is pretty spot on with her “murder husbands” summation of the Will/Hannibal dynamic as she recounts the pair’s sexy jaunt off to Europe. Still, as much as she needles Will on her involvement in the Tooth Fairy murders investigation, all her coverage is doing is creating a direct conduit from Francis Dolarhyde to his new, would be mentor, Hannibal Lecter.

Speaking of Dolarhyde, we get a brief flashback to his family life, including an unsettling meal at a table full of stern elderly folks before we’re shuttled into his present, where he’s writhing into his transformation into The Great Red Dragon, scaly tale and all. The one stumbling block to this transition is his meeting of blind co-worker and film processor Reba McClane. Reba is drawn to Francis because he doesn’t exude a sense of pity in regards to her blindness. Francis is drawn to Reba because she’s warm and sweet to him, facilitated by the fact that she can’t see his harelip and she can effortlessly navigate his speech impediment thanks to her speech pathology background. She even has a pet name for him, “Mr. D.” She must really like him, because she didn’t even flinch when he uttered “for my pleasure” when he asked her to climb into his murder van for a ride home.

Dolarhyde has found a certain solace in Reba just as Will did in Molly and the ready made family she provided, thus having prevented Will from passing along his damaged genes. We see a welcomed levity in Will as he playfully banters with Molly on the phone over their shared love of dog hoarding. Of course, delving back into the minds of killers has already cracked the psychological resolve he’s grown over the years off the job. When he dreams, he dreams of Molly splayed out like one of the victims in Dolarhyde’s slayed happy families. Like, Dolarhyde and Reba, Molly and her son can only hold him together for so long, before Hannibal’s influence bulldozes through his meticulously constructed stability. 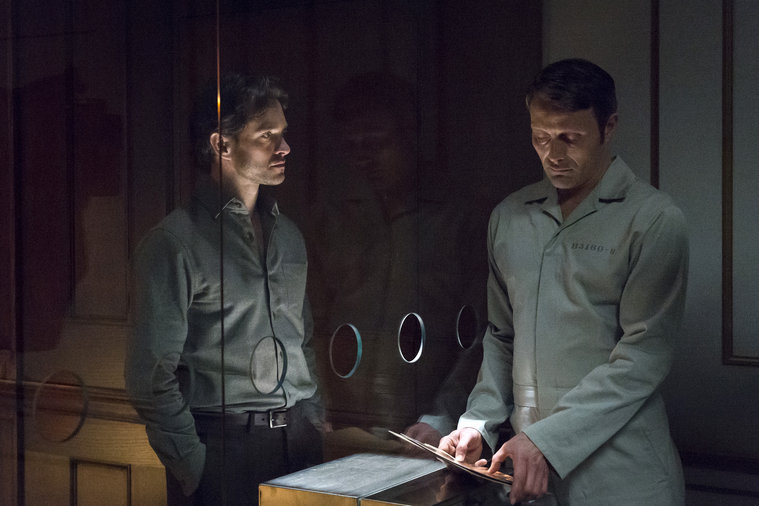