Truth be told, “The Wrath of the Lamb” is one of the weaker episodes in the Hannibal pantheon.

For starters, how many times on this show can we truthfully be expected to swallow a “this character is dead, just kidding, they’re totally not dead!” scenario? Once again, we’re expected to accept another strategic death fake out when Dolarhyde pulls an elaborately staged murder/suicide attempt in front of Reba, thus putting the key that will free her out of a burning building around the neck of a patsy corpse who Dolarhyde blew the brains straight out of, courtesy of a wildly visceral shot.

Also, how many times must we be subjected to some kind of Jack Crawford/Will Graham masterplot where someone is used as bait to draw out a psychopath, only to have the whole thing go awry and end in a bodycount. It hasn’t been long since Chilton was the casualty of a Crawford/Graham ruse, and now he’s sealed away in a Michael Jackson-style sleeping chamber looking like a piece of barbecued chicken that’s been grilled after the skin was pulled off. Bedelia DuMaurier knows that any kind of ruse where Hannibal is given even the slightest opportunity to escape basically signs her death warrant. At least Alana Bloom had the good sense to take Margo and their son and go into hiding. Unlike Bedelia, Alana has something to protect.

“You righteous, reckless, twitchy little man…” Bedelia spits at Will after he reveals what is obviously a doomed plan.  I would have gone with “squirrelly” to sum up Will, but “twitchy” works too. Although the show did kind of abandon Will’s inability to look people in the eye after the first few episodes.

Plus, someone might as well hand out those red Star Trek shirts to the cops tasked with transporting Hannibal over to federal custody. Jack had some serious gall walking through their corpses mouth agape after Dolarhyde plowed through the motorcade brandishing a gun with a silencer and a fitted Judas Priest-style leather jacket that looked eerily similar to the one Hannibal wore while he was tooling around on motorcycles while in Europe. Seriously, how is Jack Crawford still allowed to work in law enforcement?

That all being said, there was something comforting about waltzing through the show’s well worn tropes one last time. As it stands, hope for a fourth season is all but done, and if we ever see  Bryan Fuller’s version of these characters again, it will supposedly be in a movie somewhere down the line. Still, that’s a big if.

Instead, we’re left with the tender intimacy between a hetero man and an ominisexual psychopath as they consummate their three seasons’ worth of romantic tension by killing a man together. And while earlier in the season, Hannibal alluded to the fact that there was room on Will’s face for a few more scars, and the source material calls for Graham’s face to get disfigured, it was still shocking to see Dolarhyde straight up bury a knife through the side of Will’s face. However, it’s probably even more shocking that Will, with the aid of Hannibal, managed to overtake Dolarhyde with projectile impaled through his cheek.

As Dolarhyde’s blood spilled out on the ground, it bled out into a wing pattern around his body. If only for a posthumous moment, he experienced his great becoming. The same could almost be said for Will, who took Hannibal’s observation about blood looking black in the moonlight to heart.

“This is all I ever wanted for you, Will,” Hannibal says, in what is surely akin to a post-coital moment between the two lovers, “for both of us.”

It’s worth pointing out that Fuller deviated from the typical haunting, cold synth drones or classical soundtrack to score the Hannibal/Will bloody consummation with “Love Crime”  a Siouxsie Sioux track that she came of retirement to write specifically for the show. Apparently, Hannibal can lure a dormant post-punk icon out of a creative dry spell, but it can’t convince another network to give it a fourth season. Unbelievable.

If this was a show predisposed to happier endings, Hannibal and Will would just retire the the good doctor’s Mid-century modern cliffside hideaway, aka, the place where he kept Abigail Hobbs and Miriam Lass out of sight.

“It’s beautiful,” says a breathless Will before he grips Hannibal and the two men fall over the cliff and take the plunge. By all accounts, they should have ended up mangled and broken over the rocks below, but the post-credits sequence revealed Bedelia sitting at a dinner table, gripping a fork under her napkin, and waiting to stab whoever she’s waiting to join her. A pan below the table reveals that she’s missing a leg, In post-finale interviews, Bryan Fuller shot down the fan theory that Bedelia cut her own leg off herself. So, the only logical conclusion is that she’s awaiting Hannibal and the post-becoming Will.

And with that, I say goodbye to Will Graham, the endearingly disheveled and sensitive broken bird, the serial dog adopter, the  twitchy little man who always looked great when he was found wandering the streets in his boxer shorts or recovering from being gutted with bandages that strategically displayed his well-defined pecs. I say goodbye to Hannibal, that peacocking dandy with the paisley ties, the pocket squares, the indeterminate accent, the reptile eyes,  and the meticulous taste in wine. Don’t think we didn’t notice that Hannibal seemed to be grimacing  over the shattered wine bottle rather than the fact that Francis Dolarhyde shot a bullet right through his gut. We’re also going to miss the physicality Mads Mikkelsen brought to the role, given his background as a dancer and a gymnast prior to taking up acting. Could you even imagine Anthony Hopkins or Bryan Cox leaping over a kitchen counter in the season two fight scene with Jack Crawford? I’m also going to miss the black stag symbolizing Hannibal’s relationship to Will, every veiled double entendre Hannibal made to his dinner guests about feeding them human flesh, every elaborate cooking and food design scene, and of course, the psychedelic kaleidoscopic sex scenes. I’m definitely going to miss lab techs Brian Zeller and Jimmy Price, who got a hell of a send off in this final episode, thanks to the comedic muscle of Aaron Abrams and Scott Thompson. But most of all, I’m  going to miss the cojones on the NBC brass who greenlit a shot so ahead of its time, that it posited  the most tender and loving and complex relationship on television between two men, one of which was a goddamn cannibal. As if that corny sexy lady tattoo procedural Blindspot is going to be half as daring as a show where one of the tamer moments involved a man coughing up a human ear into his kitchen sink. Please.

Hannibal wasn’t perfect. It definitely had its flaws. Sometimes it was up its own ass with the visuals and hallucinations, favoring style over substance. Sometimes I needed to watch the show with subtitles on because Mads Mikkelsen’s dialogue was damn near indecipherable. But even through the flaws, meandering and missteps, the show was always fascinating and I was alway on board for wherever it was going to take me. This was its design. 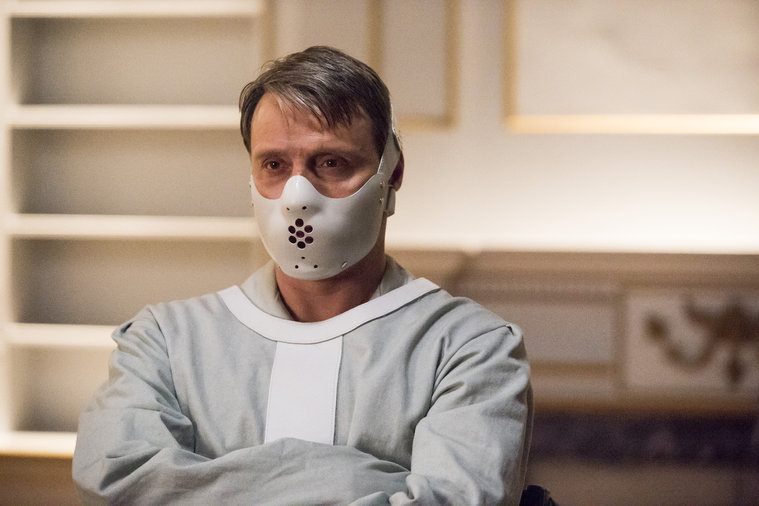