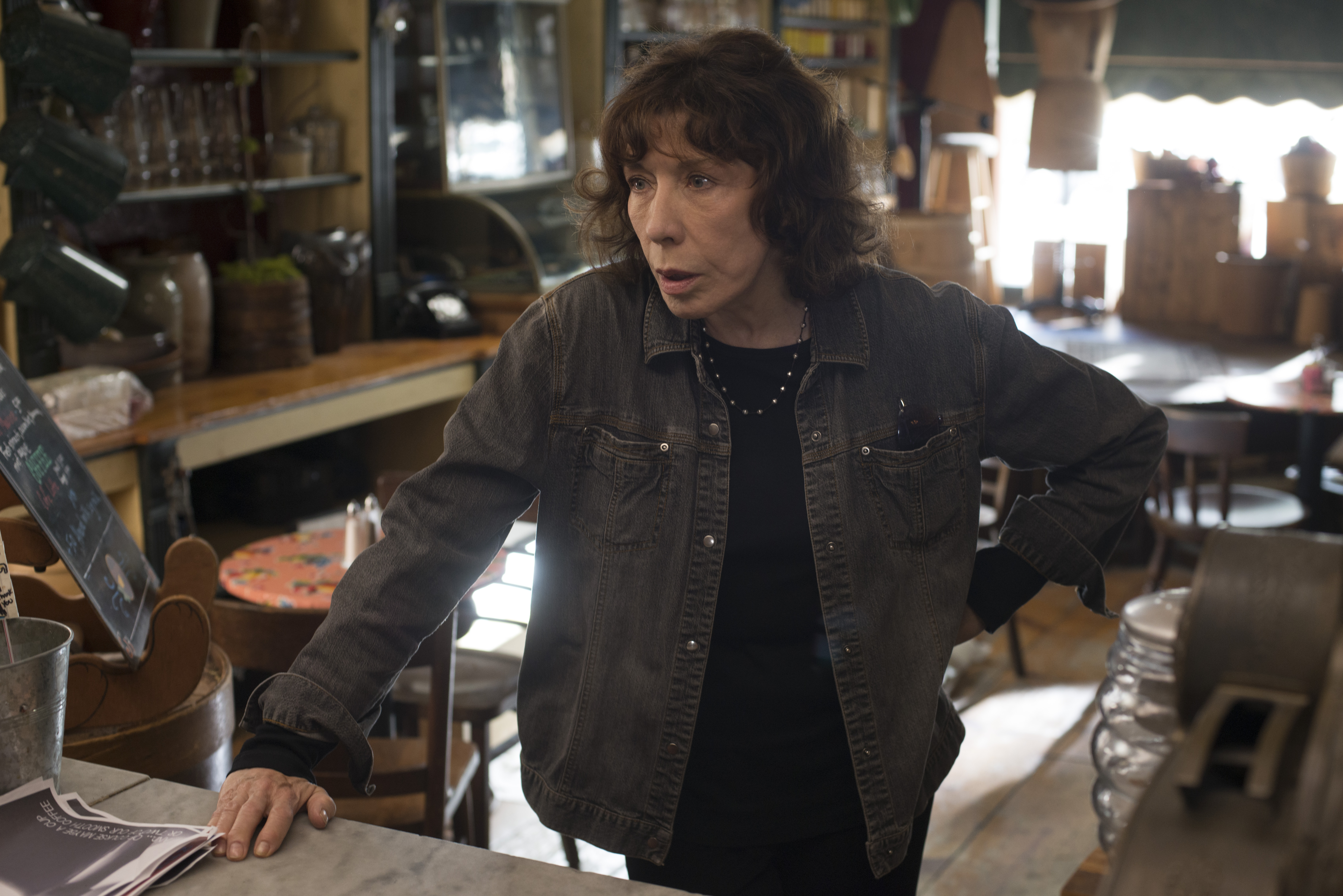 Lily Tomlin is the kind of wrinkled jack-o’-lantern you can’t help but love, even in bad, pointless movies like Grandma. Although she’s been a contented lesbian for years, openly loving, living with and marrying Jane Wagner, her writing and life partner, in 2013, she has for some reason (or reasons) eschewed gay themes in her work, opting for lighter fare without an edge. Everything changes in Grandma, and it will be interesting to see how dedicated feel-good Lily Tomlin fans will react to her at 77, so out of the closet she tore the door off without removing the hinges.

In Grandma, she’s still searching for signs of intelligent life in the universe, but now she’s doing it with rage, nastiness and a rancid vocabulary fished out of the toilet. Written and directed by the astute Paul Weitz (About a Boy), it’s a movie that knocks itself cross-eyed trying to be hip, clever and today about acerbic seniors, but instead it only makes you long for old ladies in aprons exclaiming “Land sakes alive, I smell something burning in the oven!”

Elle Reid is a failed Los Angeles academic, aging beatnik and angry feminist who collects signed, yellowing first editions of works by women like Simone de Beauvoir and Betty Friedan. She once had a lover for 38 years. Nobody has measured up since. When the movie opens, she’s kicking her latest lover out of her life after only four months, viciously calling her “a footnote.” Miserable, mean-spirited and depressed, Elle doesn’t even have time to smoke a joint or hang up a new wind chime before her 18-year-old granddaughter Sage (Julia Garner) shows up uninvited, needing $600 to pay for an abortion. With only $43 in the bank, Elle hops into her old two-door Dodge jalopy and they set out to find some money.

Mercifully short, the movie chugs along with the same faulty engine as the car while Elle stops en route to the abortion clinic to beg, browbeat and borrow from everyone she knows. First stop: Grandma invades the pot haze of Elle’s slacker boyfriend who refuses to accept responsibility for her pregnancy. After Grandma is showered with an avalanche of X-rated filth, Elle wins the contest of pottiest mouth in town, beats him up and steals his cash. Next, she hits the tattoo parlor and manages to squeeze a few dollars out of the artist who has already turned her body into a panorama of graffiti. Another detour leads to a humiliating plea for money from the unforgiving ex-husband she hasn’t seen for 30 years (marvelous Marlboro Man Sam Elliott). He refuses to help, but not before dredging up painful memories of Elle’s own abortion before giving birth to her own estranged daughter.

Then, the last resort—a visit to Sage’s mother (Marcia Gay Harden), a neurotic shrink who agrees to finance the abortion in spite of the nasty treatment she gets from both mother and daughter. No spoilers about how it ends, but if it’s meant to be funny, the scene where Lily Tomlin gets slugged by a child in the protest line at the abortion clinic backfires louder than a Hollywood traffic jam.

It’s hard to know what drew a power package as smart and beloved as Lily Tomlin to this project. Possibly she saw dual purposes in investigating the seriocomic side of gay and women’s rights. I wish I shared her commitment, but the writing is too blunt to show any real edge, the acting is uniformly mediocre and the characters lack enough shades of chiaroscuro to make them sympathetic. You’re supposed to like the characters because of their flaws, not in spite of them, but everyone in the movie is so hateful there’s nobody to root for. It’s always worthwhile watching Lily Tomlin in anything, but this vehicle breaks down before she turns the key in the ignition. When Elle finally shows a mild form of contrition toward the girlfriend she dumped, it’s a revelation of suppressed tenderheartedness I didn’t find remotely compelling. 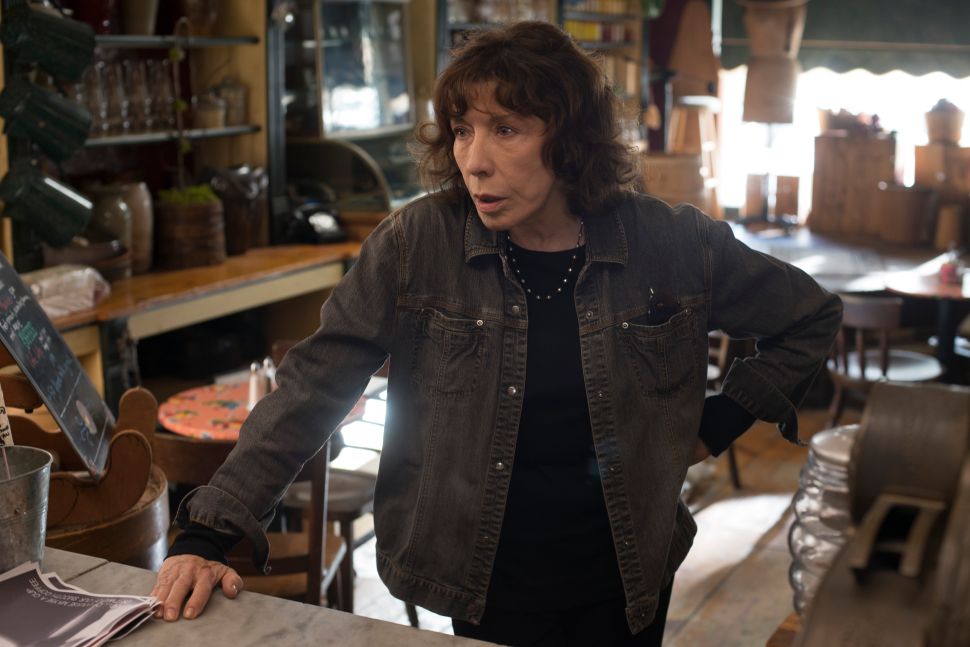