Like the Spanish Armada that set sail in August 1588 aiming to conquer England in a war of religion, power and money the Republican Party has launched a political armada behind a campaign of partisan venom and personal destruction against Hillary Clinton of a magnitude that is unprecedented in the history of American politics.

I strongly support Hillary Clinton for president and have written often that she is one of the most qualified candidates ever to run for the presidency. Before serving ably as Secretary of State she was first lady and closest confidant to President Bill Clinton, whose brilliantly successful presidency built a legacy of economic prosperity that left him as the nation’s most popular living former president. As United States Senator she reaped widespread, bipartisan and extravagant praise for her work that came from sources including the current GOP frontrunner and the only woman running for the GOP nomination today, who said she would have supported Hillary Clinton in 2008 over all other candidates if she had not been supporting Sen. John McCain (R-Ariz.), who has also joined in praise of Ms. Clinton on numerous occasions over many years.

At the same time I have written often and favorably about the profound contribution of Sen. Bernie Sanders (I-Vt.) to the highest ideals of American progressivism and the highest standards of American politics. No-one can claim I am “in the tank” for Hillary Clinton or any candidate.

Having said that my point today is that Hillary Clinton has now been targeted by the GOP right, the GOP establishment, and super-wealthy rightist GOP oligarchs in a campaign of personal vilification, personal destruction and personal attacks that at times cross the line to personal hatred that generations on the Republican right have directed against Franklin Roosevelt, John F. Kennedy, Robert F. Kennedy, Edward M. Kennedy, Bill and Hillary Clinton during the 1990’s, Al Gore, John Kerry, Barack Obama and now Hillary Clinton again.

Like the full-page ad from the radical right that greeted President Kennedy with the politics of hate as he arrived in Dallas on November 22 in 1963, these campaigns of personal destruction know no limits and respect no truths.

These rightist GOP factions, which at certain historic moments dominate the Republican party as they do today, move beyond competing against Democrats and liberals in the battle of ideas. They turn politics into an obsession using the tactics of holy war to foment what can only be described as hate campaigns that treat opponents as enemies in political wars of character assassination and personal destruction that are alien to the true spirit of the American idea of reasoned debate and tolerance.

Like the Spanish Armada that set sail in a religious war against Catholicism in England, a commercial war designed to profit Spanish mercantilists, and a war for power through conquest these episodic GOP wars against liberals and Democrats combine the attributes of religious wars with the financial greed of special interests.

The latest GOP armada against Hillary Clinton is a rerun of the GOP armada that failed in an attempted constitutional coup d’etat that sought to remove President Bill Clinton from office while he was creating tens of millions of jobs and lifting the nation to a prosperity that will be as honored by presidential historians as it fondly remembered by voters today.

The GOP armada that failed in its attempted coup to remove President Clinton from office set sail again in a failed attempt to defeat President Barack Obama in 2008, and again in 2012 while he was leading America to an economic recovery from the financial crash that occurred on the watch of the last Republican president, as the Great Depression occurred on the watch of an earlier GOP president.

Like the full page ad from the radical right that greeted President Kennedy with the politics of hate as he arrived in Dallas on November 22 in 1963, these campaigns of personal destruction know no limits and respect no truths.

The defamations and lies that comprise this politics of hate follow in the footsteps of the attempted coup that sought to remove Bill Clinton from office, the full page ad that greeted President Kennedy in Dallas, the mother of defamations from those who once accused Hillary Clinton of murder, the attacks that called Franklin Roosevelt a Marxist which is the same defamation that some of their descendants now level against Pope Francis when he preaches the Sermon on the Mount, the attacks against liberals and even the U.S. Army by Senator Joseph McCarthy in the Army-McCarthy hearings, and the attacks from the hate-filled GOP right against the military heroism of John Kerry and John McCain which have now polluted four presidential campaigns in 2000, 2004, 2008 and 2016.

Republicans are so intimidated by the right that Sen. Marco Rubio (R-Fla.), who helped lead to fight to pass historic immigration reform in the Senate, now helps lead the fight against his own work while other Republicans now debate whether millions of Hispanics should be greeted by a knock on the door in the middle of the night with moms and dads and their daughters and sons facing forced deportations.

And my leading witnesses for this case against their politics of hate against Hillary Clinton are the many Republicans who have offered her high praise over many years what she has accomplished.

And now all of these corruptions, abuses, politics of hate, campaigns of personal destruction, abuses of power through unethical misuse of Congressional committees in both the Republican House and Republican Senate, mega-spending by lavishly financed Super-Pacs funded by right wing oligarchs, organized with legions of GOP hired help and venom-spewing partisan consultants, all of this—and more—is directed against one woman in the greatest campaign of personal destruction in the history of the nation.

The following is astounding but true: Hillary Clinton is virtually a female Democratic David battling a male-dominated Republican Goliath while Carly Fiorina, the only woman in the GOP race, said as recently as 2008 that Hillary Clinton was so good she was the second most qualified person in America to be president!

Contrary to what we hear from many in the media who repeatedly “report” lies as truth, falsehoods as fact, and innuendo as “news” the miracle of the 2016 campaign is not that the target of this venom and vitriol is on the defensive, but that the candidate who would become the first woman president is standing her ground and holding her own and still leads every Republican in the summary of polling data from Real Clear Politics.

Regarding Benghazi, perhaps Republicans in Congress who have spent four years abusing their power and wasting taxpayer money with multiple inquisitions seeking to shamefully exploit the death of Americans at Benghazi for partisan gain should tell the nation why so many Republicans fought like lions to cut spending for embassy security prior to the tragedy of Benghazi.

Regarding the Clinton emails of course, as Hillary Clinton has acknowledged herself, it was a mistake to use private emails for State Department business. But she did not receive one email marked as classified, and if others unwisely included classified information into unclassified emails she received, that is not even remotely the magnitude of wrong by Ms. Clinton that Republicans falsely claim or some lazy members of the media inaccurately report.

For those Republicans sincerely concerned about those who create true dangers to our security, they might begin an investigation of former Vice President Cheney and the Bush White House about the disclosure of the classified identity of CIA officer Valerie Plame, which was done to pursue a plan to deceive the nation about WMD in Iraq designed to frighten the nation to gain approval for a disastrous war in Iraq that many Republicans seem hell-bent to repeat if they win in 2016.

Perhaps the former Bush Attorney General and other legal witch hunters who parade to the media with calls to persecute Hillary Clinton for crimes she did not commit might tell us what they think about the shameful corruption of justice during the Bush Administration which politicized U.S. Attorney posts throughout the nation with the same aggression they use today to abuse the power of congressional committees against Hillary Clinton.

And enough of the shallow and shabby media that gives the big lie equal credence with the real truth.

Hillary Clinton is imperfect in the eyes of the Lord as we all are, but she is a good and decent woman who has accomplished more in her public life as first lady, United States Senator and Secretary of State than any of the Republican candidates can dare to claim for themselves. And my leading witnesses for this case against their politics of hate against Hillary Clinton are the many Republicans who have have offer her high praise her over many years what she has accomplished.

One of the big truths of the 2016 is that the GOP candidates are so intimidated by their own right they pay homage to factions that are more akin to rightist fringe groups such as the National Front in Europe than the party that once called Abe Lincoln its greatest hero, while the Democratic frontrunner who would be the first woman president still leads all of her GOP opponents in the leading summary of polling. Her experience and qualifications tower above those any GOP candidate can claim, which is why Republicans who have so little to say about what they would do for the nation are reduced to a campaign of personal destruction against her.

It is time for Democrats to stand tall and fight back. 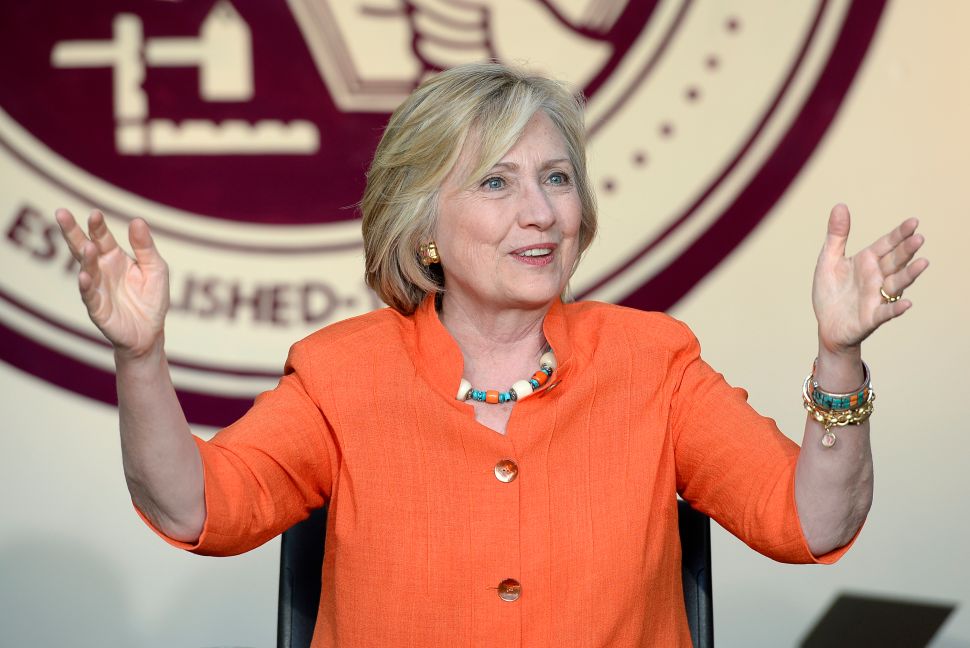