The remark from Ms. Clinton, the former secretary of state who is seeking the Democratic presidential nod, come just hours before Fox News hosts the first televised debate among the top 10 Republicans seeking their party’s nomination—and an earlier forum featuring other candidates who didn’t make the cut for the debate.

“I don’t think I need to watch it to know that nearly everybody standing on that stage, in the first or the second debate, has either actively sought to limit the right to vote in their states or supported the efforts to limit the right to vote if the were not governors but were in the Congress,” Ms. Clinton, the former secretary of state and U.S. senator representing New York, said.

Ms. Clinton said there was “no doubt that the voting rights of Americans are under attack.” Yesterday, a federal appeals panel found that a voter identification law in Texas—home to former Gov. Rick Perry and Sen. Ted Cruz, two GOP presidential candidates—violated the Voting Rights Act. The state law requires government-issued photo ID at the polls and the panel found it discriminated against black and Hispanic voters.

Like several other Democrats, Ms. Clinton argued that discrimination was the intent of the law.

“I personally think it is so nakedly partisan to try to limit the electorate to try to pick and choose who among our fellow citizens should be encouraged or discouraged from voting,” Ms. Clinton said. “It is part of their electoral strategy.”

Ms. Clinton said she expected the candidates, if asked about voter ID laws, to “give lip service” to the idea that many people are attempting vote illegally, something she cast doubt on.

The front-runner for the Democratic nomination, Ms. Clinton has been criticized for not making herself available to the press—Mr. Sharpton, a controversial figure but a power broker in the black political community, boasted today’s appearance on his show “Keepin’ it Real with Al Sharpton” was just her second national interview and exceeded the 10 minutes to which she had agreed. Mr. Sharpton had promised to grill Ms. Clinton but the interview was largely cordial, with the pair discussing voting rights before Mr. Sharpton asked for Ms. Clinton’s plan to address the country’s criminal justice system and the feeling among African Americans that they are disproportionately targeted by it.

“Well, Al, you’re exactly right about the way people are feeling, and it’s not only feeling, it’s facts,” Ms. Clinton said. “There is a very compelling and unfortunately tragic set of facts that illustrates why we need to put criminal justice reform at the top of our national agenda.”

Ms. Clinton and Mr. Sharpton both referenced a speech Ms. Clinton delivered earlier this year at Columbia University about criminal justice reform, in which she called for the increased use of body cameras and the “end of the era of mass incarceration,” a call she reiterated today.

“I know that this is a serious problem, but it falls disproportionately on the African American community,” Ms. Clinton said. “I’ve said repeatedly in many different settings over the last year, if you compare arrest records in charging of crimes, in convicting of crimes, in sentencing of crimes, if you compare African American men to white men, it is unfortunately clear as it can be that there is bias in favor of white men who are arrested or charged” with the same crimes as black men, she said.

Ms. Clinton, who also said the country has incarcerated too many low-level offenders for crimes like drug possession or parole violations, promised Mr. Sharpton this was an issue she’d discuss “not only throughout the campaign, but as president.” 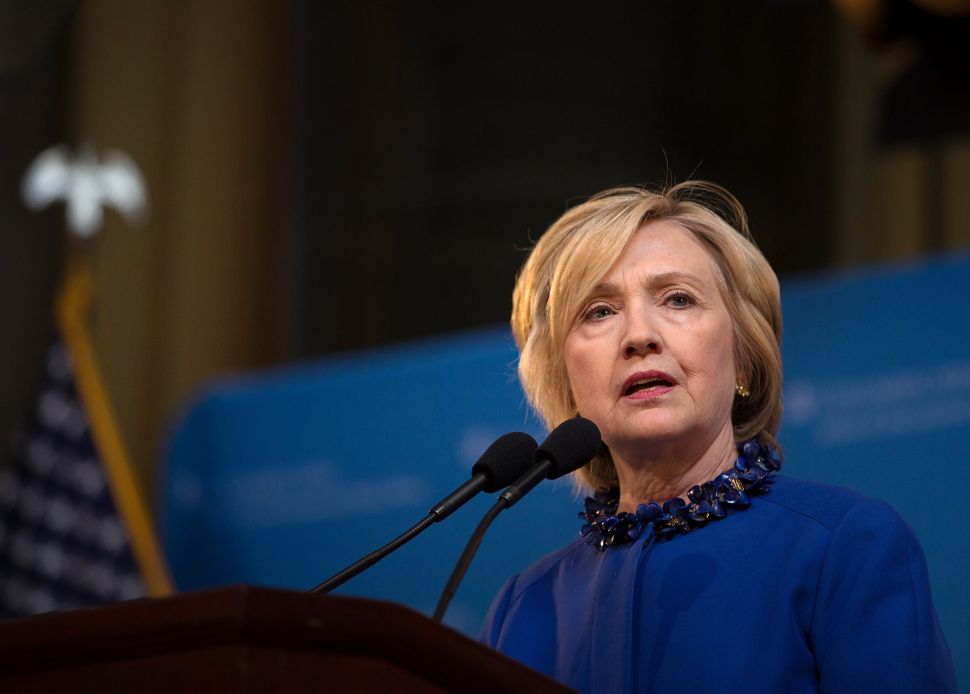