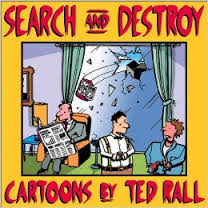 On Tuesday, July 28, the Los Angeles Times fired freelance cartoonist and blogger Ted Rall. In an editor’s note, the paper said that Ted’s May 11 story had been untruthful about an incident in which he was given a ticket for jaywalking on Melrose Avenue in 2001. In Ted’s recounting of the incident, the police “threw me up against the wall, slapped on the cuffs, roughed me up and wrote me a ticket.” All of this occurred with “a couple of dozen passersby shouting at the cop” and when the officer finally let him go, “he threw my driver’s license into the sewer.”

According to the Times, “Since then, the Los Angeles Police Department has provided records about the incident, including a complaint Rall filed at the time. An audiotape of the encounter recorded by the police officer does not back up Rall’s assertions; it gives no indication that there was physical violence of any sort by the policeman or that Rall’s license was thrown into the sewer or that he was handcuffed. Nor is there any evidence on the recording of a crowd of shouting onlookers.”

So they fired Ted for lying and in his weepy note, editorial page editor Nicholas Goldberg lamented that the incident “is a reminder of the need to remain vigilant about what we publish.”

If that seems cut-and-dried—venerable newspaper fires fabulist—then I urge you to read Ted’s explanation of the discrepancy between the Times‘ wholesale acceptance of the LAPD’s version of events and his own 14-year-old recollection. You should also read Ted’s obsessively documented follow-ups intended to save his career and reputation, which includes dramatic enhanced audio.

But that’s Ted—he’s an over-the-top guy who views his life as an unending drama with himself as its main character. It can be kind of charming, actually.

Ted offers very persuasive evidence that the horribly recorded audio the LAPD relies on to disprove his account is not even dispositive, let alone persuasive enough to cost him a high-profile position that he has held for several years. He also hammers home the fact that he has relentlessly criticized the violence-prone LAPD, which might have supplied extra incentive for the force to keep handy a 45-minute audiotape of a 14-year-old recording of a misdemeanor that didn’t even result in arrest.

There’s no need to litigate the facts of a 14-year-old mini-incident here—Ted does a very able job defending himself and I have no new information on the circumstances of the ticket or the complaint Ted filed. I will say that I don’t find it weird at all that someone shaken up by what Ted says he experienced would ask the policeman if there was somewhere to eat around there—that’s exactly the kind of “de-escalation talk” that parents often advise their sons to use so things don’t get out of hand. And I can personally confirm Ted’s contention that “sewer” and “gutter” are used interchangeably in at least the part of the country where I grew up, demonstrating that he didn’t necessarily imply that the cop had thrown his drivers license “down the sewer” but rather “into the gutter”—much more plausible.

To be clear, the LA Times is entitled not to continue using the work of a contributor it no longer trusts, for any reason. But I do take issue with the rush to fire journalists over non-scandals—often with a self-congratulatory flourish aimed more at mollifying the self-appointed journalism police than at a publication’s readers—that we’ve seen in the wake of the actual scandals like Jayson Blair and Stephen Glass. Publications that fire employees for the slightest perceived infraction are turning journalists into cowering stenographers, which is no better for journalism than if they were liars.

Knowing Ted Rall a little bit, I can’t help but wonder if this two-month-old column about a 14-year-old jaywalking ticket isn’t more about getting rid of a guy who can be a pain in the ass than about inviolable journalistic standards. Ted doesn’t help himself by equating his non-arrest to what a rape victim experiences and his self-diagnosis of Stockholm Syndrome probably wouldn’t impress Patricia Hearst. But that’s Ted—he’s an over-the-top guy who views his life as an unending drama with himself as its main character. It can be kind of charming, actually. And it’s not like the Times had no idea who they were dealing with. In fact, Ted has a long history of annoying and antagonizing people to the point where they no longer wish to be in business with him. (The Observer has used his work from time to time.)

In 1999, he sued fellow cartoonist Danny Hellman, a virtually unheard of breach among anything-goes alt cartoonists; Ted became a pariah in that close-knit crowd for forcing Mr. Hellman to run an apology on his website for impersonating him and spend a bunch on lawyers. What got Ted in the cartoonist penalty box in the first place was Ted’s over-the-top criticism of Art Spiegelman, a much revered and honored figure both inside and outside the comics world.

In 2004, The New York Times dumped him—even cleaned out the archives of his work—for a cartoon called “Terror Widows” that depicted the wives of September 11 victims greedily counting the riches they received in settlements. He also harshly criticized Pat Tillman—after he died—depicting the star Arizona Cardinal who left the NFL to serve in the military as asking a recruiter, “Never mind the fine print. Will I get to kill Arabs?” Just last summer, Pando Daily canned him for what appeared to be no “notice or cause.”

I get all this. In my household, being crass about 9-11 ranks just below Holocaust denial on the lunatic meter. It’s totally unacceptable and gets you banned. But it’s exactly the kind of bomb Ted Rall is known for throwing and the reason he’s enjoyed a lot of success—and the kind of buzz editors are looking for when they hire him.

But firing a contributor because his tone is no longer in keeping with your editorial mission is one thing. Publicly accusing him of lying is something very different. And more troubling.

As it happens, I have my own personal experience of Ted Rall telling a tale that might have been his personal interpretation of an event that differed from how others perceived it. Those differences of perception are not always “lies.” Anyone who understands life to have nuance—anyone who’s ever seen Rashomon, for that matter—knows that having a different memory of a long ago event doesn’t make one a liar.

In 1995, Ted Rall and his wife came for dinner at the Chelsea apartment I shared with Becky, who was then my girlfriend. My co-worker at Worth magazine, Monica Corcoran, was there and the writer Paul Lukas was there, too, as was the illustrator Marie Javins. I was the editor of a fanzine I’d founded called Green and Ted had written (and illustrated) stories for us about the costs of getting married and about what a rip off college is. We didn’t really know each other—that might have been the first time we actually met in person. A funny thing happened. Ted had just published a book that was getting some buzz and Paul Lukas picked up the book from our end table and said, “Hey, this is the new Ted Rall?” and I said “Yeah, this is the actual Ted Rall” and introduced them.

And then Ted told the whole room a story that blew our minds. He said that a few years earlier, he had gotten into an altercation on a subway platform with a vagrant. A physical struggle ensued and Ted ended up either pushing the guy or he fell onto the tracks. And the train came, presumably killing the guy. Ted told us this in a very matter-of-fact way.

We all asked him, “What the hell? What happened to the guy?” And Ted replied that he didn’t know what became of the guy and had had no choice. All of us were aghast.

I thought about that story as the whole LA Times-LAPD thing unfolded and I intentionally haven’t re-checked that story with any of the others in the room (other than Becky, who remembers it just like I do), because the point is that people remember things differently, especially after years pass. That doesn’t make them liars.

Ted Rall is not to everyone’s taste. Both his cartoons and his personality have earned him a long list of former employers and a bunch of enemies. Even today, during Ted’s darkest hour, Mr. Hellman is jabbing him on Twitter. So I get why employers might want to cut the cord, as several have done. But not like this.

To reiterate, the Times has a right to use whatever contributors it likes. If the paper no longer trusts Ted Rall, then it doesn’t really matter what happened on the street 14 years ago. At this point, however, they’ve hurt not only his ability to earn a living today, but by calling him a fabulist, they’ve put into jeopardy his ability to earn a living tomorrow. That’s a more serious matter.

As for what Ted wants, someone on Twitter, where he’s hanging out obsessively telling his tale to anyone who’ll listen, asked him exactly that. Ted’s answer was simple. “I want a retraction. An apology. And my job back.”

That seems fair to me. 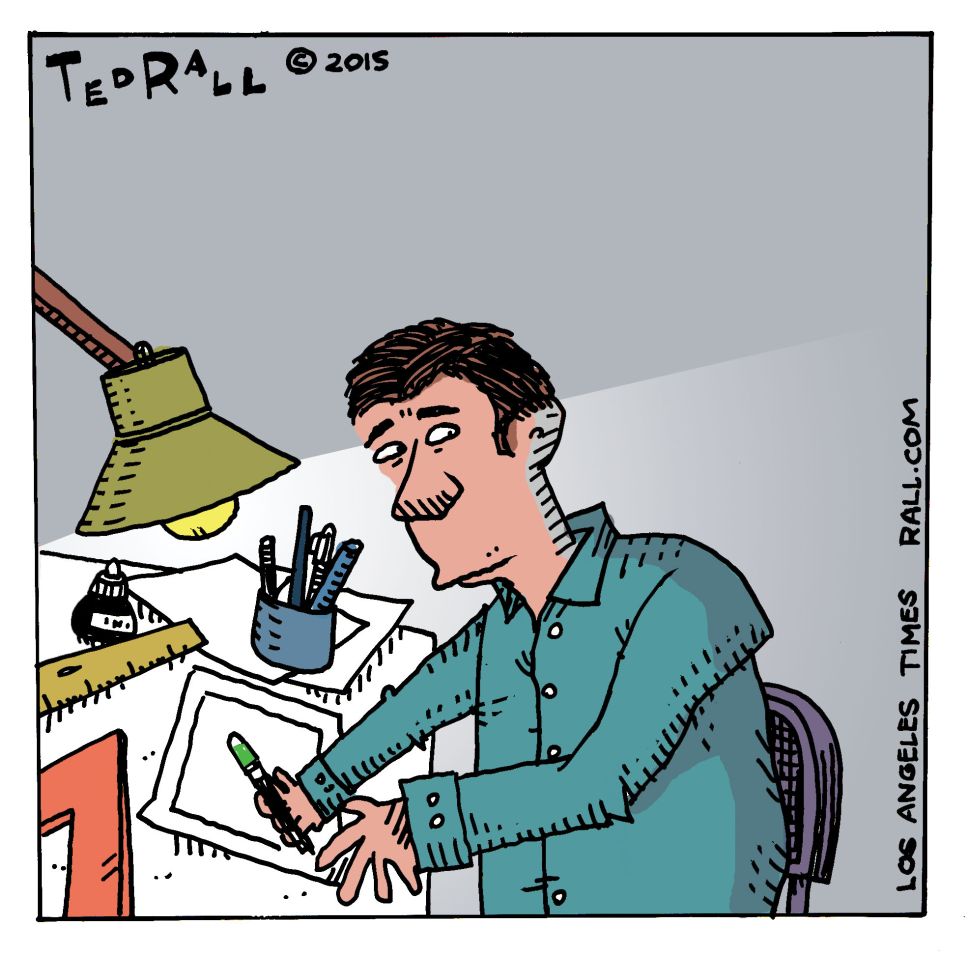