In the beginning of the year, the Washington Post ran an opinion piece from AlterNet editor Terrell Jermaine Starr with an eye-catching headline: “A Cop in Ukraine said he was detaining me because I was black. I appreciated it.”

According to the Mr. Starr, who visited Ukraine in 2009, back then people with different skin color had routinely faced housing discrimination, police treated them as suspects in drug-smuggling crimes, and occasionally the reporter “encountered young men dressed in black shirts and Doc Martens who would throw up the Nazi salute at my direction.” In other words, “racism in Ukraine was much more blunt [than in the US] – always in my face, unabashed and in plain view.”

So, how much things have changed in Ukraine with regard to racism since the Maidan revolution supposedly brought to power the first truly pro-West, pro-European, pro-democracy and pro-human rights government?

Zhan Beleniuk, 24, is a contemporary of Ukrainian independence – he was born in 1991, the year of the collapse of the Soviet Union. He shared everything with his beloved Ukraine – including hunger of the 1990s and wild reforms that did not bring much in terms of positive economic change into his family’s life – he still lives with his mother in their small one-room Kiev apartment and has to count every hrivnia. And of course, like the rest of his generation, he shared the exhilarating hope for his country to change and become a European state in every sense of the word.

Unlike his peers, he has a very personal reason to want this happen. Zhan Beleniuk is a typical Ukrainian in every way but his skin color. His father, who he never knew, was from Rwanda. He was a student of the Aviation Institute in the Soviet Ukraine and, being a pilot, was killed in action at the time of war in this African country. Zhan’s Ukrainian mother, Svetlana, raised him alone.

Zhan knows that there’s still wide-spread racism in his homeland. Despite all the changes, he is still considered black first and Ukrainian second and often is asked when he is planning to visit his motherland – Rwanda.

“My motherland is here in Ukraine,” is his answer. ”Now they [Ukrainian public] talk a lot about joining the EU. But I think that a lot of our folks are not ready for this”, he said in the recent interview to the UNIAN, Ukrainian news agency.

As a kid, he was traumatized by racist slurs of his peers, and often had to fight the offenders, but even today he hears insults behind his back from time to time.

Zhan Beleniuk knows how to defend himself – he is a professional wrestler who won the Silver medal at the latest World Wrestling Championship in Baku and dreams of winning the Gold one at the coming Championship in Las Vegas. “Are you Mike Tyson?” he was asked once by a man in the shopping mall, and Zhan’s negative answer in his native Russian was most likely the biggest shock of the man’s life.

There are others in the country whose looks don’t fit the profile of an Aryan Ukrainian, a profile celebrated by Ukrainian nationalists enjoying their moment in a lot of places of power in the country, other much more vulnerable than Zhan, who for different reasons came to Ukraine from Africa and now have to experience racism on the streets almost every day.

In the end of July, a number of Ukrainian newspapers broke the story of 23-year-old Asi, a refugee from the African state of Sierra Leone who came to Ukraine just six months ago. At the bus station at the town of Uzhgorod, which is in West Ukraine, the young woman and her 8-month-old son were trying to board the bus but were violently thrown off by the furious passengers who didn’t want to travel in her company because she “was not like them.” The violent attack was filmed by the angry crowd that was shouting “Tie her to the fence together with the kid!” The bus driver called police, who upon arrival … hand-cuffed and took away the unfortunate victim of racial abuse who was hysterically screaming in English, facing the hostile crowd of Ukrainian “Europeans” who couldn’t understand her pleas.

This was not the first racial incident in Uzhgorod. The town’s local aqua-park denied entrance to the black-skinned students of local university who happened to be from India and Nigeria. The pool’s owner, former mayor of Uzhgorod and deputy to the Supreme Parliament, Serhei Ratushnyak, explained his pool’s policy by mentioning concern about the public health of the town residents in the face of the danger caused by “syphilitic and tuberculosis Gypsyhood of the area and of the whole world.”

“During last year,” he stated, “we had a 14-fold increase in AIDS cases in town. I demand compensation for all my expenses on buying and building [of the pool complex in case the “Gypsies” are allowed into his aqua-park by the authorities]”, he said.

“We let in the residents of Uzhgorod [only], we let in [only] the white people” – these was the explanations given to the reporter by the on duty entrance guard – white blond-haired lady in her forties (on the video here).

Racism in Ukraine is not limited to the western part of the country or directed only against people from Africa. In mid-June, in the city of Kharkov, around a hundred foreign students demonstrated with placards reading “No to Racism!” and “Protect Foreign Students!” The reason for the demonstration was the violent attack by the mob of 40-50 people in black clothes and balaclavas at the students from Jordan – four of them were taken to the hospital with knife wounds and severe head injuries. On the way, the violent mob put four cars on fire and stubbed to death two dogs that belonged to their ‘enemies.’ The video, taken by a scared foreign student from the safety of his dorm room window, shows the scale of the mob attack and impunity of the attackers.

A day later, a special plane with a medical team aboard was sent by the King of Jordan to take the wounded home. “I’m scared to walk around the city,” admitted one of the Jordanian students. “There is no police, no protection, we have a security guard at the dorm – a grandfather of 60 years-old. If the criminals are not found, I am packing my suitcases and going home.”

Since that was the fourth attack of its kind on foreign students in Kharkov this year, it’s hard to be optimistic about Ukrainian police protection with regard to dark-skinned outsiders. And there was nothing encouraging in the official version of the events given by Mr. Valentin Nalivaychenko, then-head of Ukrainian Security Service, who stated on the TV program “Shuster-Live” that the “local gangs might have been provoked and inspired [to beat up the dark-skinned foreigners] by the foreign special services. To put it bluntly – by the Russians.” Mr. Nalivaychenko promised full support by his agency in the investigation – so far, almost two months later, no link with Moscow has been established.

Same for the ugly incident with the Sierra Leone woman in Uzhgorod. To this day, there have been no consequences for the perpetrators who threw the hapless young woman off the bus and wanted to tie her to the fence along with her eight-month-old baby.

Zhan Beleniuk, the Ukrainian wrestler who dreams of becoming a world champion, is not optimistic. “I am a patriot. I deeply love Kiev, my dear Podol, I am ready to kiss this land. … Nevertheless, so far no changes can be seen. More than a year has passed – and not a single change. … It seems to me that in the East [Ukraine] something fishy is happening. And the guys, real Ukrainian patriots, that are fighting there, they are dying for no reason. In the inner part of the country, here, on peaceful territories, no positive changes have been taking place.”

No positive changes in Ukraine toward people of color too, one would add. 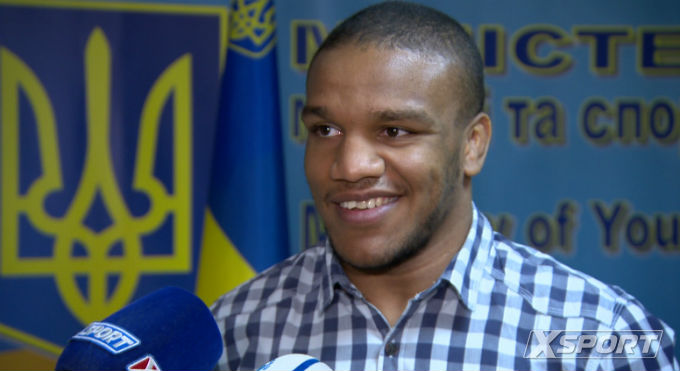