Slava Rubin runs Indiegogo, the most free-for-all of the crowdfunding sites. When we met with him, he was excited to tell us that the company is starting to see major brands crowdfunding as a market proof for interesting new products.

However, we visited to discuss something much more personal: where religion or spirituality or even God fit into his life as a founder and a leader in the technology industry.

These topics have been dominant throughout American history, but the startup world is an analytical one dominated by data-oriented thinkers. Yet there’s also this growing sense of entrepreneurs looking for something that doesn’t easily fit into that framework. Practices borrowed from Eastern traditions, particularly meditation, are becoming bigger and bigger. We recently covered a device that provides biofeedback to improve meditation.

Very soon, lots of members of the tech community will head out to Burning Man. We recently wrote about a fake crowdfunding effort satirizing that practice. Whatever readers might think of Burning Man, it doesn’t really fit into the nerdy stereotype of startup life. It is artistic with hints of transcendentalism.

So we’ve gotten interested in this question of how prominent technologists fit spirituality (however they want to define that) into their lives, their work and also their take on how the tech culture sees the topic. The first conversation in our investigation is with the co-founder and CEO of the first big crowdfunding site.

The following conversation took place at Indiegogo’s Manhattan office. It has been edited for length and clarity.

I first got interested in talking to you about this topic when I learned from David Yarus of JSwipe that you’d met on a group trip to Israel. I didn’t know if that was a spiritually motivated trip or something else. What did going to Israel speak to for you?

I’ve been to Israel a few times. I’m a big fan. I’m Jewish. I think Israel is a beautiful place.

I’ve also been active in a community called Summit. That’s a group of entrepreneurs and changemakers who get together and share ideas. They actually now have a mountain that they own in Utah.

‘I guess spiritual now is quite a loaded word. I guess now it means Do you do yoga? or Do you meditate?‘

A foundation reached out to Summit about a group of the changemakers coming and joining an experience of learning in Israel. It was a mix of all kinds of different people, Jews and non-Jews. The whole idea was to get immersed in the political and active and social environment, to get people to experience Israel

It was completely exhausting. Physically and mentally and emotionally.

So can you tell us about your spiritual life?

I guess spiritual now is quite a loaded word. I guess now it means Do you do yoga? or Do you meditate?

While I think—if you are a religious person—you follow very clearly some set of rules that a group of people has decided to lay out.

For me, a spiritual person believes in certain thoughts or parameters of how you want to live life. Without necessarily being locked into one group’s set of interpretations.

So I do believe in God. I’m Jewish. But I believe much more that I’m spiritual than I am clearly religious. I do go to synagogue every now and then. I go to Shabbat dinners often.

To me, my equivalent of meditiation is freeing your mind from the overthinking of everyday. To me, medition is going to the schvitz, which is the bathhouses in the East Village, where there’s no windows, no outside stimulation, no excitement.

It’s a little bit more of a physical experience. That’s my meditation. Removing myself from all the things that excite you.

How does your spiritual framework fit into your role as a founder?

I guess it’s all kind of like building blocks. You get raised by your parents and your parents instill certain kinds of ideology and ways of treating people. I then when to Hebrew day school, and learned a lot about religion. Then I went to public high school and learned a lot about a more diverse set of people. I then went to the University of Pennsylvania and was a corporate consultant.

The reason I give you that background is that all shapes the person I am and the experiences I’ve had.

In terms of it being directly connected to being a spiritual person, I try to take moments to decompress. I love silence. I am actually different from most people in that I don’t listen to music, ever. I like silence. I love nature. Letting the silence in my mind let my mind wander.

The entrepreneurial life is super hectic. Super unknown. Lots of crazy ups and downs. I think it’s helpful to find some grounding. So that while your startup, while every startup has its roller coaster experience, you’re able to stay grounded.

Does your thinking about spirituality or your beliefs help you in dealing with setbacks in the company or competitors?

‘I am actually different from most people in that I don’t listen to music, ever. I like silence.’

So one of the main things probably that helped to make me what I am today is this: My dad died when I was a kid. He got cancer when I was 12 and died when I was 15. Navigating that gave me a lot of perspective in terms of what I think is important and what is a little more of a blip or hiccup in life.

I think there was a lot of exploration at that time just to think to myself: what does this all mean? How does this all affect me?

I think I probably created some mental muscles at that time, like how my brain thinks about certain things. The ideas of how do you navigate setbacks like this. I don’t know what muscles those are, but I’m calling those “mental muscles.”

That’s kind of foundational to the DNA of my spiritual practice, I would say.

What do you mean about what’s important versus what’s a blip?

If I get turned down by a VC, I shouldn’t let that bother me. It wasn’t a big deal. None of that really matters. You just keep moving forward and look to be a good person and try to improve the world.

Some things are much bigger. Like if you lose a loved one, that sucks. That’s significant.

But if you just have a setback in your company you just learn from it and move on.

‘I think that tech or entrepreneurial life is super chaotic. It’s super crazy … So what is needed is some ability to ground yourself.’

When we started Indiegogo we got rejected by 90 VCs. Then we launched in 2008 and the market crashed and we nearly shut down. Talking through that with our two other co-founders, we had to ask ourselves, what was the most important thing? Was it being able to go to expensive dinners and having a good time? Or was it bringing this interesting thing in the world?

I don’t know if I’d call it spiritual practice, but it was trying to think about what all these signs I was seeing were trying to tell me. I don’t mean superstitious signs, but all these data points that I was seeing. Everything from the actual conversations I was having to things I saw on TV that told me about what was happening in the world. That’s what I mean by “signs.” Observations.

Do you think there is an openness to spirituality in tech culture?

I think that tech or entrepreneurial life is super chaotic. It’s super crazy. I think that it’s an endless roller coaster of emotional and analytical and management and chaos. So what is needed is some ability to ground yourself, and how one does that will vary by their personality and the assets they have available to them.

Some will ground themselves with their family. Others will try to find it through this thing called meditation and yoga and those sorts of practices. Others will look to religion.

You can’t have your life, all parts of it, in endless chaos.

I’m not surprised that with the rise of entrepreneurship that there is also a rise of this counterbalance of finding stability through religion, spirituality or family.

I don’t have enough of a view to speak broadly for the whole tech scene, but, I would say, in the circles I’m exposed to, I would say surprisingly spirituality is an accepted part of the culture. Meaning that I think the generalization is that there’s no spirituality, but I would disagree. Again, just based on my own experiences and the people I happen to know.

Does that mean you think entrepreneurs and technologists believe in God? 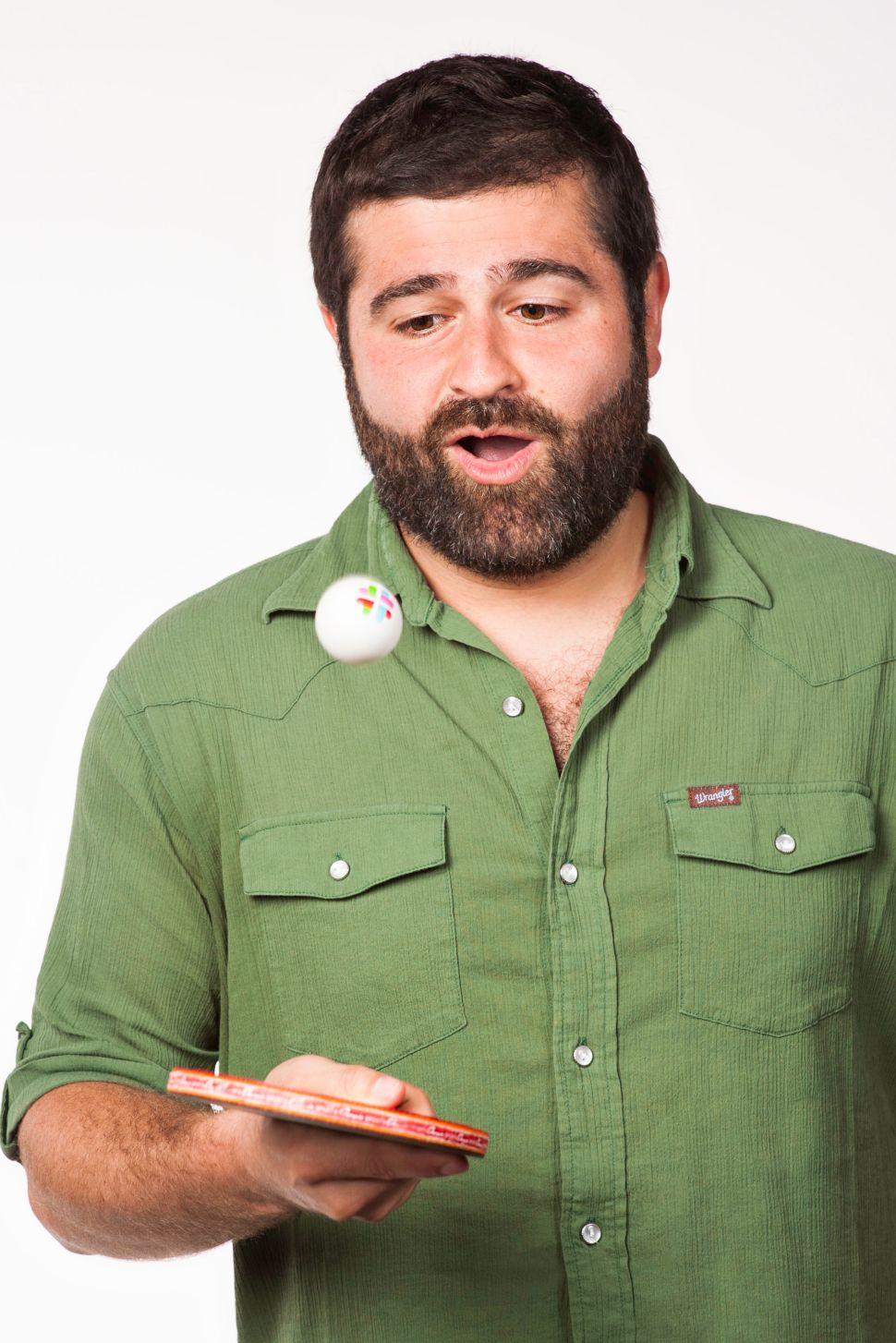