Two weeks ago, on August 6, 1930, marked 85 years that New York State Supreme Court Judge Joseph Force Crater exited a west side restaurant and vanished. Prior to F.D.R. appointing him in April 1930, Crater was State Supreme Court Judge Robert F. Wagner’s law secretary from 1920 to 1926. Wagner climbed Tammany’s ranks from Yorkville with State Assembly Leader Maurice Bloch, who was my grandfather, and John A. Mullen, his law partner, in tow. When, in 1926, Wagner was elected U.S. Senator, Crater’s star rose more than it ever could have in Morningside Heights under his leader, a Deputy Commissioner of Plants and Structures. The roots of Judge Crater’s vanishing are in Yorkville. Bloch and Mullen were Wagner’s capo regime, winning plumb municipal assignments. Joseph Force Crater was elevated to Tammany’s Law Committee commensurate with their rise. Throughout the 1920’s he’d been their bagman.

In 1913, however, Wagner was Tammany’s State Senate Leader, Aaron Levy was its State Assembly Leader. With Democrats in the majority, Alfred E. Smith was elected Assembly Speaker. In 1918 Wagner left the State Senate for the State Supreme Court. In 1920 he hired Joseph Force Crater as his Law Clerk. Crater worked directly with Wagner until 1926 when Wagner was elected U.S. Senator. Tammany’s State Assembly Leader, Bloch, managed Wagner’s campaign. But, rather than follow Wagner to D.C., Crater became associated with Wagner’s New York firm. In the interim, Levy had become a State Supreme Court Justice.

On February 2, 1929, Judge Levy made Joe Crater Receiver in Libby’s Baths’ foreclosure. Libby’s Baths, at the corner of Christie and Delancey Streets, were indebted to Irving Trust—a firm with Tammany Hall ties—for $1.5 million, a shocking sum at the time. Irving Trust forced Libby’s into Foreclosure (State Court) before Libby’s could file for bankruptcy (Federal Court). After Levy made Crater the Receiver, a Mr. Justice Sherman made Francis X. Quillinan the Referee. Quillinan, Al Smith’s son in law, was a name partner of Wagner’s.

Other State Supreme Court officers were foreclosure fixtures, too. One, the Sheriff, Charles Culken, a West Village Tammany District Leader, was under investigation for stockpiling booze in his 14th Street warehouse. His Council, John Caldwell Myers, commended F.D.R.’s appointment of Crater. The other was the infamous Thomas M. “Tin Box” Farley, the County Clerk immortalized on Broadway for spending monies found in a Wonderful Tin Box. “Tin Box” barely won Tammany’s nomination for Sheriff. He’d been accused of padding his office’s payroll. But Mullen, Farley’s council, took him off of the hook: enhanced security staffers were needed to protect the office’s new stenographic machines. 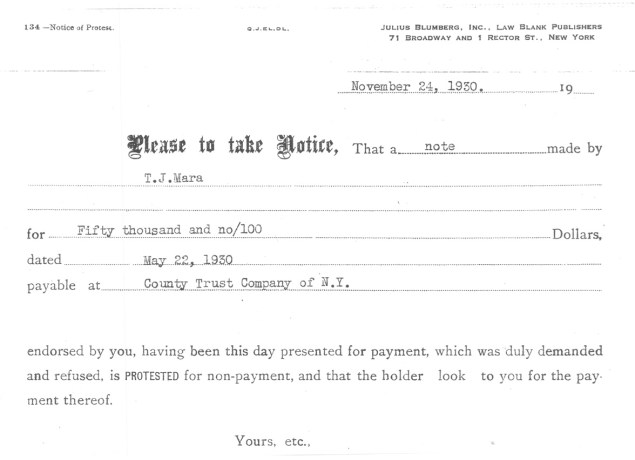 Whether or not those stenographic machines were used during Farley’s 1929 campaign for Sheriff, Bloch managed it. Since Bloch’s candidate was Farley, and Mullen’s client was Farley, Farley was into both of them. Given that Wagner’s guys, Crater & Quillinan, were distributing the Libby’s Bath’s assets, Bloch was as knee deep in Libby’s Baths as anyone. On June 22, 1929 Libby’s was auctioned to American Mortgage Loan, the only bidder, for $1.5 million. Like Irving Trust, they had Tammany ties. Crater was suspected to take money from both sides and vanish. There was no evidence but now there may be. After both Bloch’s sudden death, December 1929, and Crater’s sudden vanishing, August 1930, a housing project planned for Libby’s site was scuttled.

The Tiger Room, at 23rd Street and Fourth Avenue was where (former) Governor Smith’s influential friends cavorted. For Smith to win Mid East states in 1928, his campaign manager, John J. Raskob, the Republican head of GM and DuPont designed a scheme to raise $1.5 million from Smith’s friends to pledge funds that, he told them, would not have to be repaid—win or lose! Smith’s Tiger Room regulars willingly pledged sizable sums to entice smaller donations, convinced that a Smith White House would see them all rolling in butter. But when Hoover crushed Smith, Raskob reneged on Smith’s friends, calling them “deadbeats.” One, George Van Namee, as a result of his $10,000 pledge, became titular head of F.D.R.’s gubernatorial campaign. Raskob pursued him despite the fact that Republicans were suing him. As a State Public Service Commissioner he shouldn’t have been fund raising for F.D.R.

Herbert Lehman and “Uncle Henry” Morgenthau, Sr. paid Raskob back promptly. Howard Cullman, Treasurer on every campaign Bloch managed—Wagner, FDR and Sheriff Farley’s—asked Raskob to re-express the funds into Cullman’s tobacco trust; that tobacco was a good investment in good times and a better one in bad times. Raskob passed. FDR then broke with Smith by refusing to release State Committee funds to cover Raskob’s National Committee scheme. Absent from Raskob’s pledges, however, were Tiger Room regulars Wagner, Bloch, Mullen and Crater.

Three years after vanishing, Crater had yet to answer any of his pages. 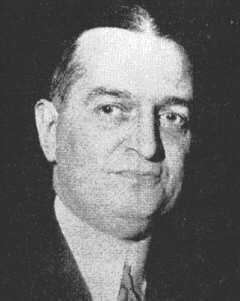