Unlikable. Flawed. Unrelatable. Un-self-aware. Pathological. Julie Klausner, despite her reputation as brassy, is a close read, and she’s heard all the coded language both critics and Internet trolls alike have adopted to talk about the kind of character she plays in her new Hulu series, Difficult People. Which is essentially herself, or at outsized version of it.

“I think all those words are synonyms for ‘authentic and diverse female characters,’ and thank the fuck god,” said Ms. Klausner, the creator and co-star of the new acerbic Amy Poehler-produced streaming series. “I remember when The Comeback first came back in 2001, I was completely blown away. I remember thinking, ‘Oh my god, this is the first time I’ve seen a woman get to do what Larry David does.'”

Which was what, exactly? “You know, being self-absorbed, shallow and not terribly self-aware but completely funny at the same time.”

The character she plays on the show, named Julie Kessler, a writer and performer who, like her creator, recaps Real Housewives for Vulture by day and moonlights as a pop cultural enfant terrible: dabbling in stand-up, storytelling, podcasting, Twitter…even hosting a PBS pledge drive at one point…while still speaking her mind at the most atrocious moments and ending up in horrifyingly awkward encounters alongside her friend Billy (Billy Eichner). The pilot episode has her and Billy loudly complaining about the understudy of Annie…while sitting in the theater’s seats…and the plot is propelled by an ill-advised tweet Ms. Klausner’s writes about Blue Ivy that gets picked up in an Internet shit storm.

“I like saying something crazy and then leaving the room,” Ms. Klausner whines later at a dinner party hosted by her boyfriend Arthur’s (James Urbaniak) PBS boss while scrolling through her Twitter feed of negative comments about her remarks. “Unless they like what I say and then I stay in the room.”

In another episode, we see Billy and Julie rolling their eyes when they are one-upped at a Moth-like story telling event by a paraplegic woman who rolls on stage and begins, “When my uncle molested me the first time, I thought he was joking.”

Julie’s mother played by the brilliant Andrea Martin, proves that the character comes by it honestly. “I swear,” she huffs to her daughter (or as she refers to her, “a comedian I guess,”) “He plans his trips to avoid my crises!”

No. Julie Klausner did not create a nice character. Or a particularly sympathetic one. But who says that nice is funny?

“I think we are still in a place where we see too much of the traditional Honeymooners parable (in comedy): the big, loud male comic and his reasonable, understanding wife–who’s often way better looking than he is–and has hilarious lines like ‘Oh, honey,’ ‘Why would you do that sweetheart?’ ‘Oh, you.’

So for me writing this character came out of a very different place of: what do I want to do, what do I think would be funny? And that just happens to be acting like an asshole.”

That’s not to say that we’re still loving only Lucy. It’s just that the trend of the AnnoyingHero“–comedy’s answer to the dark, gritty female antiheroes that have started springing up in the most unlikely of places *cough, Lifetime*–has yet to be lauded with the same of prestigious comparisons to Walter White or Tony Soprano, and can sometimes feel like the exception, rather than the rule. For every Roseanne, Sweet Dee, and Princess Caroline there’s ten half-baked, one-dimensional love interests whose only job is to shake her head with disbelief mixed with adoration at her goofy husband’s latest hijinks; a product of lazy writing regurgitated from a writer’s room of angry boys.

Maybe that’s why Ms. Klausner chose to go a different route: she and showrunner Scott King maintained a writer’s room for Difficult People, but with only eight weeks to write and shoot eight episodes, “we really didn’t have any time to run a writer’s room in the traditional sense.” Ms. Klausner wrote the scripts herself and used her writers to help punch up jokes or bring in alternative ideas to bounce off her own.

“I just honestly didn’t have the time to rift through people’s pitches that weren’t exactly what I was looking for,” she said.

Amy Poehler was hugely instrumental in helping Ms. Klausner understand the world that her characters lived in. Though they embody the worst qualities of millennials–selfish, snarky and entitled, writing mean things about celebrities on their iPhones to pass the time– the universe they live in is populated by similar horror shows: self-righteous helicopter parents, cruel coworkers and overeager dates (in Billy’s case, he’s horrified to find out he’s dating a “participator,” the guy who always raises his hand when the audience is asked for a volunteer). However some characters, like Arthur, seem to come straight from another program, where not every interaction ends in an escalating conflict. (There’s a reason why Ms. Klausner told EW.com to “picture Curb Your Enthusiasm if the two leads had never created Seinfeld.) AS Klausner told me:

“We had set up for ourselves that had to do with this idea that Billy and Julie would always get in their own way, and ruin an opportunity for themselves, because of their own failings, and around halfway through the season, Poehler challenged us to break our own rules and reminded us that no one was forcing us to write a show like that.”

Though the result can have you scrambling to figure out the show’s tone–are these just amoral sociopaths like the This Always Sunny crew? Hannah Horvath in a couple years? East Coast, non-animated Bojack Horsemans?–the process is hilarious and never difficult to watch. 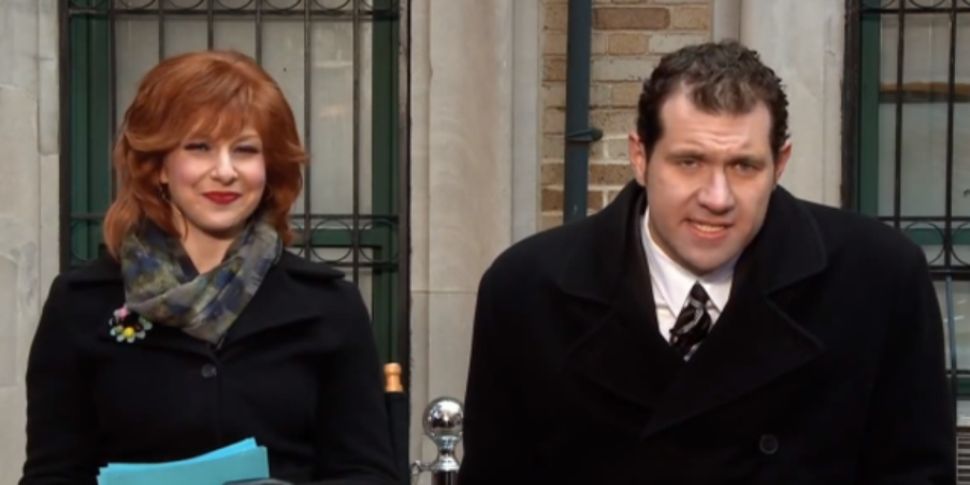