Back on August 12, the Back Room ran a story headlined “New Poll In New Hampshire: Kasich Surges While Christie Struggles.” It noted how the “two governors are close friends but similarly positioned” and also the surprisingly close ties between Ohio Gov. John Kasich and New Jersey, including the strong friendship the governor had with popular NJ Congressman and gubernatorial candidate Bob Franks.

On Aug 21, Matt Arco at the Star-Ledger followed up on the Kasich NH surge. His story, “Christie’s newest 2016 threat: Ohio Gov. John Kasich,” written from Salem, NH, added much color to that emerging narrative. In it, Arco quoted former GOP national committeeman Tom Rath, who said of Kasich, “I think he has the right mood and approach for right now… He has a nice way with people. He’s inclusive, he’s open and highly practical, and a successful governor.” These quotes seemed almost directly aimed at Christie, who is positioned nearly identically on substance but has a very different style from his friend and counterpart in Ohio.

And now, more evidence is emerging that goes beyond the anecdotal.

Christie’s overall job approval showed what Eagleton called a “collapse” — 37 percent approve compared to 59 percent who disapprove. Brutal home state numbers. And there are ominous implications for his national ambitions as well. While Christie maintained the support of 69 percent of Republicans – strong, if not Kasich strong – on the issues that matter to Republican voters, he struggled. On the issue of taxes, which Republican voters in NJ listed as their top concern, only 38 percent approve of his approach, which 54 percent disapprove. Eagleton notes this was ” the first time a majority of Christie’s base has given him disapproval on the issue.”

With a very late primary on Tuesday, June 7, New Jersey Republican voters will almost certainly play no role in directly choosing the party’s nominee. But weakness among the voters who know a candidate best is a frequently exploited theme among one’s political rivals. Meanwhile, it’s looking more and more like there may be only one ticket out of New Hampshire for a currently serving Republican governor. The others will have to return to their states and face an electorate with pent-up expectations. 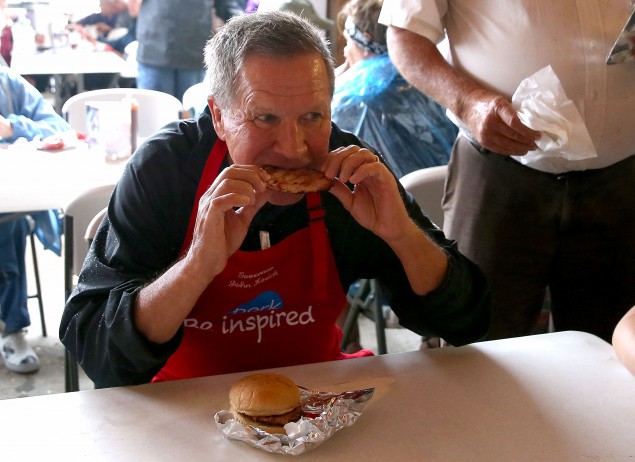