Former Governor Jim McGreevey’s prisoner re-entry plan has his a roadblock. While McGreevey’s program was popular with local and state officials and received a $4.2 million grant from the state to open, local residents near the proposed site on Martin Luther King Drive and Bayview Ave in Jersey City did not feel the same.

The facility was slated to open in one of the buildings of Sacred Heart Church, directly adjacent to Sacred Heart School. At a Tuesday August 4 community meeting regarding the facility, McGreevey was asked to leave. Meeting attendees cited that it “is not Jim McGreevey’s meeting. It is our meeting.”

Officials at Sacred Heart School declined to comment and referred PolitickerNJ to the spokesman for the Archdiocese of Newark, Jim Goodness. According to Goodness, “everything is moving very quickly” in terms of resolving the issue but he declined to comment further.

The Sacred Heart program was McGreevey’s most recent step toward redemption after a 2004 scandal caused him to resign from his position as Governor. After earning his Seminary degree, McGreevey became the Executive Director of the Jersey City Employment and Training Program. Martin’s Place, a facility that primarily helps those on probation, opened in 2014 under McGreevey’s leadership. While Martin’s Place does provide some help for those on parole, the Sacred Heart facility was supposed to fully extend those services to those who have served time in jail.

“I think what’s important is I listened, we listened, I heard,” McGreevey told The Jersey Journal after the August 4 meeting. “I had hoped that I had a reasonable compromise but yet, it was evident there was a lack of support for the Sacred Heart site.”

Jersey City Mayor Steve Fulop’s office declined to comment on how they would proceed with grant funding. 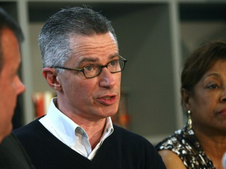