ELMWOOD PARK- Steps away from the intersection the Federal Railroad Administration named as “one of America’s most dangerous” last year, Congressman Bill Pascrell (D-9) was joined by other N.J. officials to unveil new safety measures put in place at the rail crossing. For Pascrell—who worked with New Jersey Department of Transportation Commissioner Jamie Fox and NJ Transit the pass the upgrades—the measures will help ensure no more accidents would occur in the future.

“This is just one of many crossings that need improvement,” said Pascrell of the railroad crossing on Midland Avenue that straddles the Elmwood Park/Saddle Brook border. “Accidents occur where the street meets the railroad.”

For both Pascrell and Fox, while the improvements at the Elmwood Park crossing represent a critical step in reducing accidents in the area, the looming problem preventing more improvements in the state is a lack of funding.

“The Transportation Trust Fund will run out of money in the next fiscal year,” Fox told PolitickerNJ. “We need to make sure there is a stable revenue stream.”

While Fox said that there have been “discussions” among members of the Christie administration about finding a solution for the Transportation Trust Fund’s lack of funding, the Commissioner would not provide any details of the Governor’s plan to restore funding to help fix New Jersey’s crumbling transportation infrastructure.

“I think the legislative branch and the executive branch need to come together and have a plan,” Fox said. “I am confident we will come to a solution.”

For Pascrell, the lack of funding is also a concern.

“I blame the federal government, too. While New Jersey hasn’t done its part, the government lags way behind,” said Pascrell of transportation initiatives.

According the Executive Director of NJ Transit Ronnie Hakim, NJ Transit and the DOT have taken steps to resolve accidents and delays in New Jersey.

“We are encouraged by the safety initiatives that have been put in place,” Hakim said. “But in the end we need these safeguards to be represented by the state government.”

Last week, after a harrowing week of mass delays for NJ Transit commuters who travel into New York City by train, Governor Chris Christie released a statement stating that N.J. residents had been “victimized” by “Amtrak’s indifference to New Jersey and it’s commuters.”

Though Fox was appointed by Governor Christie in 2014, he did not echo the Governor’s pinning of the blame on Amtrak for delays and other issues.

“We need a tunnel to New York, no question,” said Fox. “But this is an issue where we as a society in both the state and federal levels haven’t done what we need to do.”

For Hakim, resolutions to delays can only be met through cooperation between both agencies and the government. During today’s press conference, she agreed that more funding was needed to keep transportation moving in the state.

“This is not a Democratic or Republican issue,” Pascrell said. “Do we want to wait for another bridge to fall on someone’s head? The improvements take money and I will keep fighting to see those improvements.”

The improvements at Elmwood Park—which include new grading of the intersection to improve visibility, yellow paint on the street and timing of traffic lights with lights and guards along the train tracks—are a demonstration of the issue being bipartisan according to Pascrell.

“I am not a poster child for the Christie administration,” Pascrell said. “But here, we went above that.” 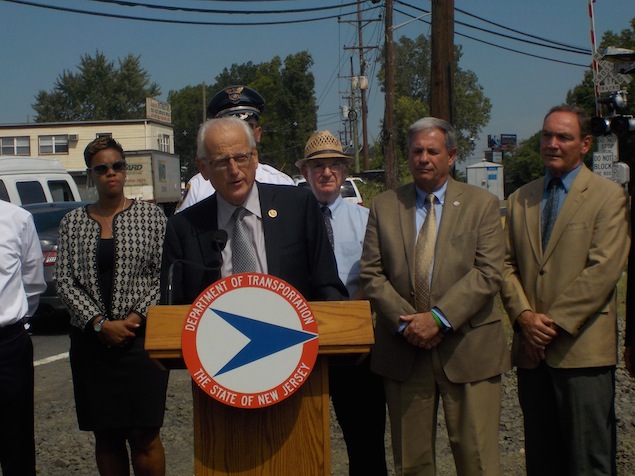