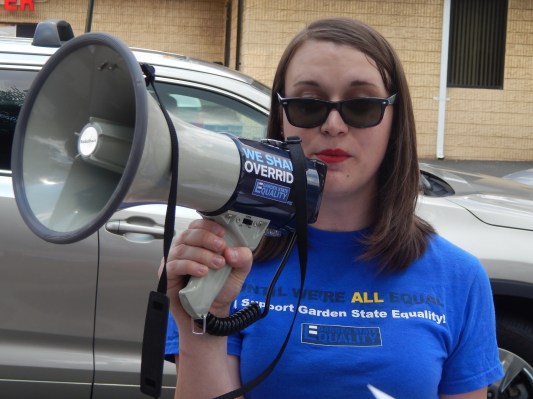 It’s almost the season when the jack-o-lanterns come out and the year’s most most attention-grabbing news items get the Benny Hill treatment on Halloween night. After seeing that New Jersey-based Spirit Halloween will be carrying a costume based on Caitlyn Jenner’s Vanity Fair cover earlier this year announcing her full transition and revealing her new name, Garden State Equality Executive Director Andrea Bowen wants to ensure that LGBT advocates and allies send the company a message.

The costume consists of a white one-piece garment similar to Jenner’s on the Vanity Fair cover, with a wig and a sash that reads “Call me Caitlyn.” A picture on the store’s website that has since been removed depicted an unshaven man wearing the costume. While no formal boycott has been announced, Bowen says that she hopes the costume will spur people to action and lead to shoppers choosing to buy their Halloween gear elsewhere.

Bowen said that a VP with Spirit Halloween, whose other store Spencers Gifts will also be carrying the product, responded to her email by saying that the costume was meant to be respectful.

Spirit Halloween, which is based in Egg Harbor and has locations across New Jersey, replied to a request from Bowen that they stop carrying the costume by saying that the intentions of those who wear the costume may not be to insult the transgender reality star.

“At Spirit Halloween, we create a wide range of costumes that are often based on celebrities, public figures, heroes and superheroes. Caitlyn Jenner is all of the above and our exclusive Caitlyn-inspired costume reflects just that,” said Spirit Halloween in a statement.

The costume is hitting the market at a time when the transgender community has been seeing a crest in media visibility due to the success of Jenner with the Kardashian flank of reality shows and actress Laverne Cox with her role in the Netflix hit Orange Is The New Black.

For all the strides that trans people have made in recent years, trans women and especially trans women of color continue to suffer with murder rates much higher than the national average.

While overall hate crimes against LGBT people have declined, the National Coalition of Anti-Violence Programs found that transgender men and women are 28% more likely to experience violence than gay and straight cisgender individuals.