I sang in a hardcore band and we got relatively popular really fast. Then a bunch of shitty things happened and the members of the band were really terrible to me and they made a lot of people in my area hate me. Now, I feel like I cannot show my face because so many people genuinely do not like me based off of lies my ex-boyfriend and members of the band spread. I remember you getting a lot of backlash in Perfect Pussy at first in your local scene — I guess my question is like, how do you deal with it? How do you find the strength to leave the house after men have been so fucking horrible? I don’t know what to do. I just want to leave.

Consider this bubble burst. I’m a phony. I don’t have a real answer for you. Instead, I present you with a cautionary tale.

Consider this bubble burst. I’m a phony. I don’t have a real answer for you. Instead, I present you with a cautionary tale:

People in my hometown had long considered me a problem, but I really become persona non grata after a terrible breakup brought to light issues of abuse and sexual violence on behalf of someone who was once very important to the scene. When our band wrote our first demo, all I could write about were my terrible experiences being pushed around by his former friends and bandmates. When people in mainstream media started to care about that demo, the conversation quickly turned to what a terrible liar I was, how annoying, how ugly, what a bitch, whatever. Cinderella unceremoniously yanked from the ball at midnight to roll home in her pumpkin, staying up to sweep the ashes.

I should have ignored it and focused on my own life, but no. The fact that everyone rejected me kept me up at night. I’d long-since stopped going to shows, but they still took place in the building where I lived. I never knew who I’d run into, and I didn’t want to run into anybody.

Balancing a 40-hour work week with out-of-town shows on the weekends and trying to cope with the record labels, interviews and photo shoots that had suddenly been introduced into my life meant that I was not in a healthy place. In public, I was unflappable. Weirdly enough, this was when I started to dress like I do onstage, in little dresses and flat shoes and lots of makeup. In retrospect, I guess I was visually detaching myself from that punk scene. It was a radical departure from my standard uniform (and that of any 14-year-old boy really into Gang Green)—head shaved, oversized men’s dress shirt, black jeans, Doc Martens.

I reinvented myself into someone I saw as special and untouchable and advanced, and refused to flinch if I saw someone I used to know across the street, but I fumed and cried and threw fits when I was alone in my apartment. I asked myself the same questions you’re asking yourself: How can I deal? Where will my strength come from?

I decided it was in my best interest to get revenge.

In the building where I lived, formerly with my abusive monster of an ex, where we helped start the venue that now existed to entertain the community that shunned me, one used to be able to get up onto the roof. And from that roof you could see, about a block away, a tremendous LED screen in front of the university theater. At night, it would play a series of Jenny Holzer’s Truisms on an endless loop. Years before, when things got rough, I would escape to the roof to smoke dirt weed and stare out at the scrolling light until my eyes glazed over and my jaw softened, until the urge to sob passed.

Here is the part that might disappoint you: I wish to god that none of this had ever happened.

Mad as hell, feeling alternately shut out and hatefully exposed, and the exhibit long since taken down, I read and re-read the “Inflammatory Essays,” again asking, how can I deal, where will my strength come from? Her words rang clear in my head. YOU THINK I’M AFRAID TO REACT. YOU THINK NO ONE CAN REACH YOU. THE GAME IS ALMOST OVER SO IT’S TIME YOU ACKNOWLEDGE ME.

The answer unfolded for me like a lotus, hot sugar spinning in my sternum. I felt nourished and reborn, grinning and alive with hate: I would get them back. I would talk shit. I would say all the things I’d been holding in for years in bigger venues than they’d ever be able to access. I’d been saving while they’d been spending. It was time they acknowledged me.

So when we had our first big interview, I explained to this poor kid in excruciating detail my own inflammatory essay about how everyone from my hometown was a racist, sexist neanderthal who made embarrassingly bad music and supported rapists. I made some rude hand gestures, too. Then I did a few more interviews, parroting the same stories word-for-word. I told the truth as I knew it. I did exactly what I said I was going to do, and appropriately, got exactly what I deserved.

Now, here is the part that might disappoint you: I wish to god that none of this had ever happened, and if I had it to do over, I wouldn’t have opened my stupid mouth. What I did was not “dealing with it” or “finding strength.” It was the idiotic raving of a very hurt person who should have thought before they spoke.

The harassment was quick and merciless. There was a message board. Men threatened my physical safety. It was serious enough that the local paper did a story about our band’s ascent and my subsequent social downfall.

All I wanted was for people to like me and think my band was cool and good, and what I got were interviewers psyched to ask questions about why I was so widely disliked. It stressed my bandmates out. It terrified my parents, who were already having trouble adjusting to the fact that their only daughter was suddenly thrust into the public eye for being a holy terror batshit lunatic fronting a project with an unprintable name. Like you, I couldn’t leave the house.

But thanks to my stupid insistence on getting revenge, I was trapped on that particular roller coaster for about six months. I basically had a real live nervous breakdown. I wanted to let it die, but the fact that everyone hated my guts had become such an integral part of my story that people asked me about it constantly. My value was directly wrapped up in peoples’ hatred of me. It out shined my politics, our album, our dynamic as a band.

So I stopped doing interviews entirely. It took months before I felt O.K. talking to people again, and when I finally did, I would freak out if people asked me anything personal. One night, half-drunk and laying on the floor of a hotel room in Portugal, I yelled at a very nice young man from a prestigious newspaper, telling him he was wasting column space on my stupid band when there had just been a police murder in Ferguson and a bunch of shit going down in the Middle East. I’d become the embarrassing caricature they’d been painting of me all along.

I do not have an answer for you, because when this happened to me, I responded in the worst way imaginable and caused myself irreparable damage. It put fear in my heart and humbled me. Even now, writing this, I am afraid that rehashing this story will kickstart another tidal wave of bullshit.

I would have reminded myself that a lot of people, especially dudes, are at least 50 percent poop and pond scum, with terrible ideas that they don’t feel compelled to change, because we live in a world that caters to (and celebrates) their idiocy.

Even now, writing this, I am afraid that rehashing this story will kick start another tidal wave of bullshit.

I would have found the strength to leave the house in time, when I was good and ready. I wouldn’t have forced myself to do anything. I would have sat in my house writing lyrics and playing guitar, getting ready to prove people wrong in a much more impactful way—by going out there and wiping the floor with their dorky chug-chug dude bands, proving that girls, even obnoxious girls who deal in hysteria and hyperbole and make a nuisance out of themselves in the name of their moral code, are not to be pushed around.

It goes away. It takes time—in my case, it’s taken years. But trust me, your story will soon be replaced with another story. Someone else in a band fucks up, becomes a target. Somebody cheats on somebody else. Steals from a friend. Beats somebody up on tour in Europe. Another album art controversy. And meanwhile, there are NSA phone taps and militant religious splinter cells kidnapping schools full of young girls, Donald Trump is running for president, drones are killing kindergarteners, and the police are covering up murdering women after “routine traffic stops.” Really makes you not give a fuck about what a bunch of welterweight nerds in Framtid shirts think about your particular brand of feminism.

Basically, I wouldn’t have put myself in danger just to get revenge on a bunch of people who can’t see past their noses. I’m not advocating in any way for staying quiet when you’re being mistreated, or allowing other people to walk all over you, but gossip is garbage and by acting out, you play right into their hands. Don’t be like me.

Your ex-boyfriend and former bandmates are fartclouds. Given the odds, they will likely lead long, unsatisfying lives, exhausting themselves on the human hamster wheel of smug self-satisfaction. You will go on to rock another day. Please take good care of yourself. Don’t pay attention when they try to cloud your emotional windshield with unimportant self-serving garbage. Eyes on the road. Read the news and keep things in perspective. Remember that the world is very big and they are very dumb. Please start writing songs again. Start another band. If you have to write a demo about how much they suck, do that. And when you do, send it to me. I’d love to hear it.

Malfunction is a monthly advice column from Meredith Graves, lead singer of Brooklyn’s Perfect Pussy, and creator of Honor Press records. You can send any questions, problems and concerns to Meredith Graves at meredith@honor.press. Your information will, of course, be kept completely anonymous.


Malfunction No. 1 – Confessions of a Serial Cheater

Malfunction No. 2 – How the Fuck Do I Survive in New York City?

Malfunction No. 3 – Your Body Is an Empty Room 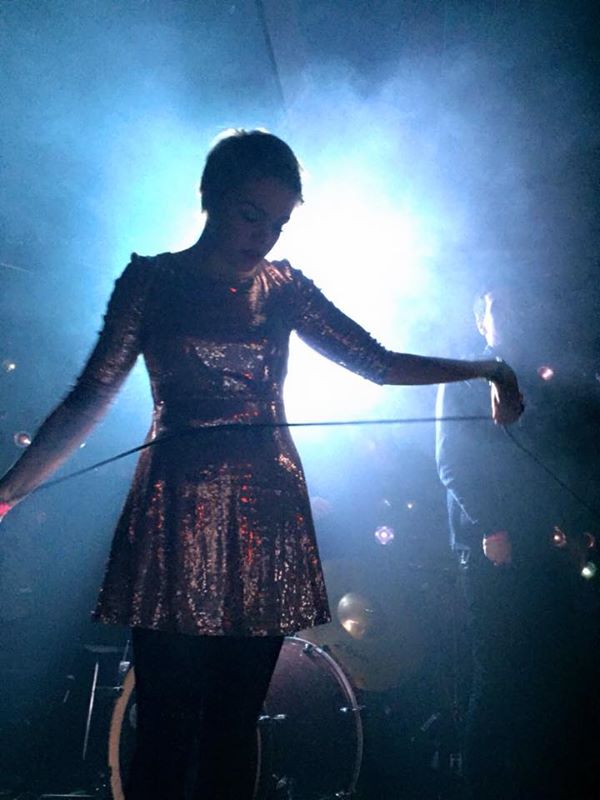