Virginia Johnson wants to be courted, as in a good old-fashioned courtship. Dating, dining, dancing, you name it. What Liz Phair referred to as “all that stupid old shit, like letters and sodas” in “Fuck and Run.” Granted, this desire was awakened by an oily perfume magnate who invested in her sex-research clinic so he could employ her to measure the vaginal lubrication of women exposed to the smell of pit sweat, making his motives transparent and her reaction incoherent, but for the sake of argument let’s ignore that, since the show sure did. Let’s focus instead on how she pitches this to Bill Masters, her partner. “We hooked ourselves up to wires while we talked each other through the stages of arousal,” she reminds him, and us. But don’t let your memories of when Masters of Sex was actually, you know, sexy cause your vaginal-lubrication sensors to redline just yet—Gini’s got a different idea in mind. “Do you ever wonder what it would have been like if we had met differently?” I believe I speak for the group when I say no!

No, no, no, no, no, I don’t wonder what it would have been like had Bill and Virginia been merely star-crossed colleagues pursuing a forbidden romance instead of exhibitionistic/voyeuristic weirdo geniuses verbally informing one another of the onset of orgasm as they fucked with a bank of electronic equipment rigged to their junk. I don’t wonder about how the co-author of Human Sexual Response would have fared as peewee-league football coach. I don’t wonder about how the woman who upended the entire medical establishment’s approach to sexuality got along with her mother and daughter. I don’t wonder what Masters of Sex would have been like if it were a dime-a-dozen workplace/relationship/family drama. But in “Two Scents,” this week’s episode, that’s once again what we’re getting.

Not all the time, though, which is what makes it frustrating. There’s juuuuuuuuust enough weirdness left for the boring stuff to truly sting. As we’ve discussed before, the patients-of-the-week structure the show gets into from time to time is no less chintzy than it was when Lost in Space did it with one-eyed aliens, but at least an impulsive sex-symbol actress tearing her blouse open and shouting “Who on God’s green earth wouldn’t want to fuck this?” as buttons scatter across Virginia Johnson’s office keeps things lively. So, in its way, did her gross jock husband’s genuinely crushing confession that he realizes he was more interested in her as an icon than as a living breathing woman once the novelty wore off. Sometimes it pays to go for broke rather than play it safe.

And there are other examples of the show zooming off in an unexpected direction. Take Bill bonding with his son’s bully more than the son himself, or Virginia’s grating daughter Tessa beginning to take her side against her even more insufferable grandmother. The former is an unusual, enlightening way of exploring Masters’s abuse-scarred psyche, and his ability to connect with others only in unorthodox contexts. The latter makes a daring break from the thuddingly dull mother-daughter conflict Gini and her kid have been embroiled in all season, deepening and shading the younger character while showing what her mom was up against to become the impressive person she is.

This, alas/of course, is undercut before the credits roll. Tessa sees firsthand how superficial and unfeeling Gini’s mother (played by Frances Fisher, who needs to have a long talk with her agent) can be, then hears the two of them have a knock-down drag-out about it. But just when she’s about to share the contest-winning essay she submitted to a teen magazine with the one person in her family capable of truly appreciating and applauding that kind of achievement, she sees that Virginia’s blouse is haphazardly buttoned and shuts her out for being a slut. Look, I get that teenagers can be unsympathetic assholes, but that only increases a show’s responsibility to work hard at making them more than that, lest the audience be left with no choice but to define them by their worst characteristics. Masters hasn’t lived up to that responsibility. And the less said about the grandma, who is basically a golem constructed from patriarchal platitudes, the better.

Yet somehow, neither of these women is the most rote role on the show. That honor goes to Libby Masters, now and apparently forever a leading contender for the most thanklessly written character on all of television. It’s not Caitlin FitzGerald’s fault: Anytime she’s asked to do something other than vocally undermine or flagrantly fail to understand what’s going on with more important characters, she invests the part with real force and fire. Meanwhile, with the patrician looks and bearing of a Hitchcock blonde, she’s a commanding physical presence, more than capable of holding her own on screen against the intensely embodied performances of Lizzy Caplan and Michael Sheen. But dear God, every time she’s asked to shrilly denounce whatever Bill or neighbor Paul or son Johnny are up to, one of Betty Draper’s tumors metastasizes. In moments like that the character exists for no other reason than to Not Get It, and to inflict the Not Getting It on others in sublimated revenge for how she has Not, herself, Been Gotten. It’s a flat, uninteresting, played-out dynamic—the dramatic equivalent of styrofoam packing peanuts, placed around other, ostensibly more vital cargo to get it where it needs to go intact. But the box is empty. 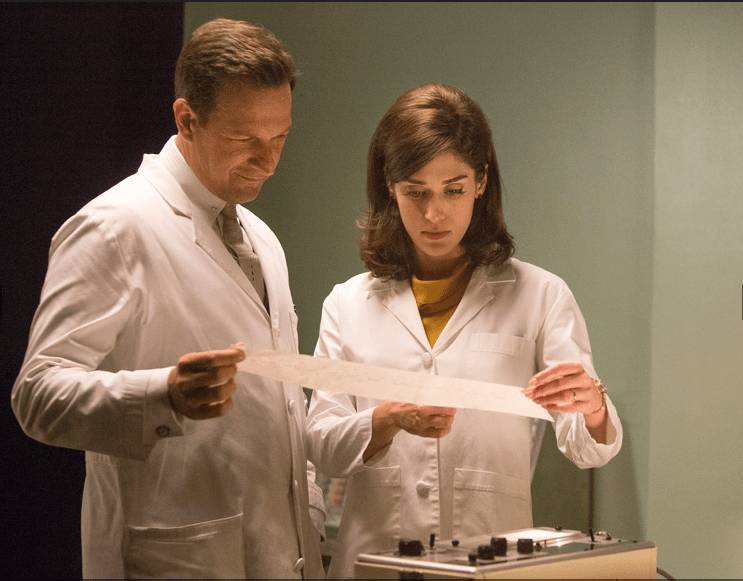 Filed Under: TV, Masters of Sex, ,