In typical Masters of Sex fashion, the double meaning of the initiative that gave this week’s episode, “Surrogates,” its title is spelled out in neon for the slow-witted. “Is that really enough?” asks Libby Masters, regarding her husband Bill’s idea of having volunteers help single patients out with their sexual issues. “A stand-in?” “Some people,” he replies, “that’s all they have.” And we in the audience, who by now are aware that Libby, Bill, and the third corner of their bizarre love triangle Virginia Johnson are all seeking attention outside their primary relationships, nod sagely, or something. But I, for one, am fucking thrilled that they’re all fucking, or on their way to fucking, people other than each other. Freed from one another’s clutches, they’re watchable for the first time in weeks.

In Gini’s case, she’s got perfume magnate Dan Logan to thank. Much of the credit for the guy’s Vegas-based charm offensive goes to Josh Charles, who plays Logan like an older, wiser, kinder, gentler version of his evil prep-schooler from Wet Hot American Summer: First Day of Camp. (I guess Eric really did show him the fever.) Time has softened me to what at first appeared to be a one-joke character; his monomania about the power of smell is slowly turning into an only slightly parodic approximation of Bill Masters’s own obsessive interests, and of course his chivalric defense of fair Lady Virginia in the face of a twitchy young Vietnam vet with a knife and mommy issues speaks for itself. Here’s a guy who, unlike Bill, encourages Virginia to drop everything for a working vacation, and then is willing to drop everything himself in order to follow her back home. Considering the constraints placed on Bill and Virginia’s relationship by both family and vocation, the appeal here is obvious.

As for the good doctor, nothing’s happened between Bill and his young former neighbor Nora yet—if anything he was kinder to Virginia tonight than he has been in weeks, as long as you ignore the whole “starting a whole new program behind her back” thing—and we are almost certainly meant to find his wide-eyed delight about her interest in sex surrogacy skeevy. Fuck that! Is the age and experience differential and the whole schoolgirl-with-skinned-knee thing a little bit sleazy? (Okay, more than a little bit?) Yes, and that’s what this show is for, goddammit. Give me kink or give me death. At any rate, Nora may be younger, but she’s also intelligent, enthusiastic, serious about the work, and lovely; most importantly she seems like she can stand to be in the room with Dr. Masters for longer than five seconds, which is more than can be said for literally any other character on the show this season. It’s no coincidence that the same was largely true of the audience, until tonight.

But not every character is enlivened by their extracurricular activities. The exception, as she nearly always is where interesting material is concerned, is poor Libby Masters. Sure, she’s got something going on the side with neighbor Paul, and there’s something sordidly sensual about watching them fuck in the apartment his braindead wife had rented in order to flee their marriage. (Certainly an opportunity to see Caitlyn FitzGerald nude is not to be taken lightly.) But unlike Gini or Bill, who respond to their new love(ish) interests like Super Mario getting an invincibility star, she remains, to be blunt, a joyless dickhead, resisting Paul’s attempts to strike up post-coital conversation and sneering at his emotional need to do so at all. She later reacts to Bill’s account of Nora’s entrance into the surrogacy program with a similarly predictable surplus of obstinacy and lack of empathy; after years and years getting used to the idea, her sudden squareness about the nature of her husband’s work is hard to swallow, too.

Eventually, however she gives in and opens up to Paul, spilling her guts about the civil rights worker she had an affair with last season (one of Masters’ many “now you see ‘em, now you don’t” supporting players), whom we now learn survived the dangerous Freedom Summer down south only to be struck and killed by a car on his return to St. Louis. There’s no reason this revelation had to fall flat, since telling her current lover about a past one whom she cherished is precisely the kind of conversational intimacy that would match Paul’s accounts of life with and without his wife. But it’s written like a high-school drama-club tryout monologue, its awkward and artificial phrasing—“His name was Robert,” she begins out of the blue, like no human being introducing the topic of an ex-boyfriend ever—making it feel less like a heart-to-heart and more like a radio address. Only a smart bit of physical business on FitzGerald’s part, compulsively clawing at her neck with her fingers as if suffocating just before starting the speech, comes across as human and vulnerable rather than stagey and stiff.

A more coherent show than Masters might have stuck with the obvious tripartite structure these storylines would seem to dictate for the duration, a la Mad Men and “Far Away Places” from its Season Five run of back-to-back-to-back masterpieces. Instead, there are still side plots galore, and the quality thereof is decidedly mixed. Barton reappears with a brand-new, never-before-seen-or-even-mentioned colleague at the clinic. To paraphrase Libby, his name is Jonathan, and he’s a younger doctor who euphemistically susses out Barton’s homosexuality: “You strike me as someone who…might like classical music? In my experience, one classical music lover can often tell another.” It’s cute. Unfortunately, also nearly identical to the scene from Wet Hot American Summer (yes, again) in which Bradley Cooper and Michael Ian Black’s characters talk about being “creative” as a substitute for coming out of the closet.

Better off, kinda, was a different forward-thinking same-sex couple: Betty and Helen, who in this episode attempt to deceive Bill into artificially inseminating the latter by passing her off as caddish Dr. Austin’s wife. Their storyline starts strong, with a funny and lively sequence in which Austin and Helen’s bragging to Bill about what he’s accomplished since they last saw one another is crosscut with the lawsuit-losing, bankruptcy-skirting, stripclub-owning, alimony-owing truth. (As Helen, Sarah Silverman gets the line of the night: “A lot of the dancers have surgical scars, is that on purpose?”) And it ends not just strong but hot, as, having failed to defraud Dr. Masters, they go about impregnation the old-fashioned way, if by old-fashioned Austin methodically, respectfully fucking Helen while Betty holds her hand and looks into their eyes. But in between there’s a ludicrous bit in which Bill uncovers the ruse by discovering Helen’s hymen is still intact, which…okay, look, obviously I’m not a middle-aged lesbian, but I’m pretty sure I know how these things work and um, I kinda doubt it? Well, whatever, at least they’re having a good time. That’s the least this show can do. 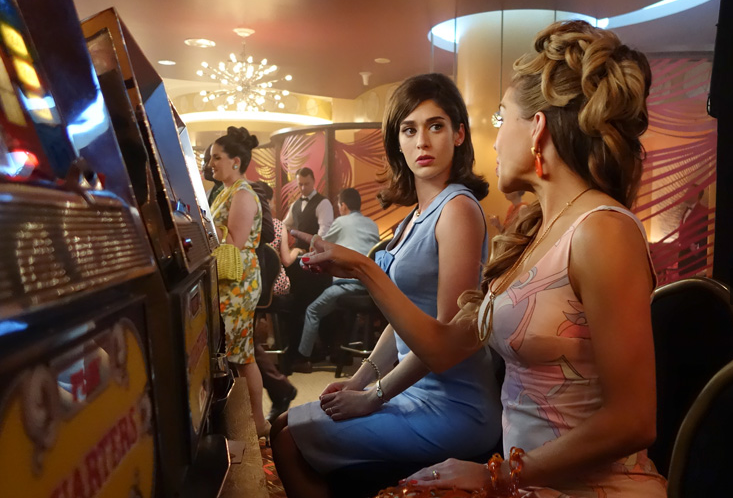