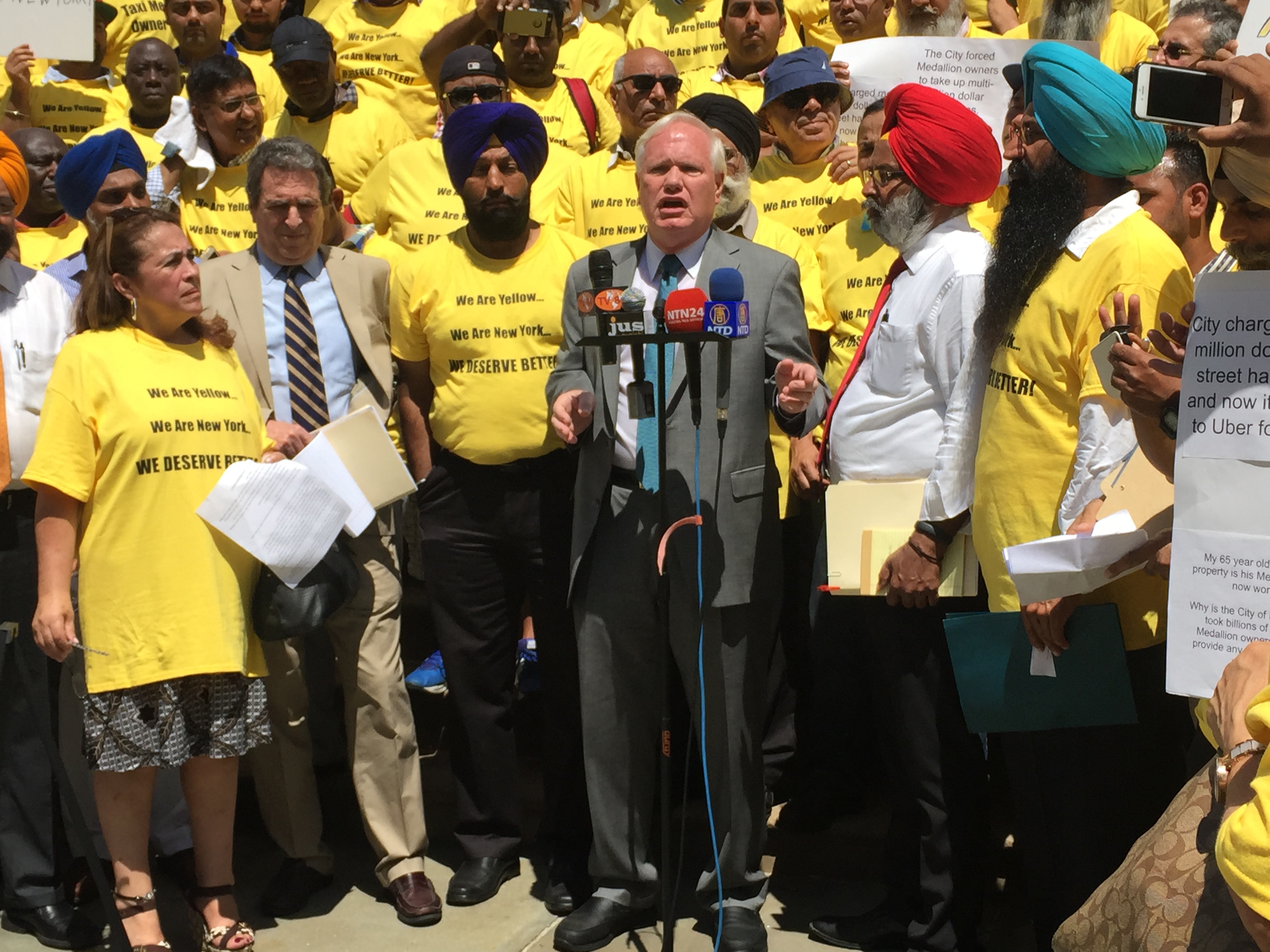 More than 100 people rallied on the steps of City Hall today in support of individual taxi medallion owners today—seeking to put a kinder face on the taxi industry but doing so weeks after Uber scored a victory over Mayor Bill de Blasio, a taxi industry ally who had sought to cap Uber.

“It’s been portrayed that only millionaires have these taxi medallions. That is absolutely not true,” State Senator Tony Avella told the diverse crowd gathered on the steps. “The people standing behind me and to the side of me and that are still on the street are individual working family owners, and it’s unfair what’s being done to them. They may have mortgaged their house, they may have mortgaged their future into buying that medallion, and when the value of that medallion disappears, what are they going to do? Go into the bankruptcy?”

The value of medallions—the city license to operate a yellow cab—have been on the decline with the rise of e-hail apps, which has consequences for the people who purchased them and also for the city, which counts on their sales to fund part of the municipal budget. It was in that environment that Mr. de Blasio, who had been boosted by large donations from members of the taxi industry, sought to cap the growth of Uber and other e-hail apps—first saying it was an effort to lessen congestion, then offering other rationales ranging from parity with yellow cabs to concerns over worker conditions. (Uber drivers are independent contractors who use their own cars and pay a percentage of fares to the company.)

During the bruising PR battle over the cap, the taxi industry was typically represented by people who owned many medallions—like taxi mogul Gene Freidman, a de Blasio owner who was seeking a taxi medallion bailout and has recently sought bankruptcy protection for some of his companies. But the rally today sought to portray the people who own just one medallion and drive the cab on their own, as opposed to those who own many and hire drivers.

Still, the message wasn’t quite united. The rally was put on by a group called the Taxi Medallion Owner/Driver Association, representing such independent owners, and a press release said the group did not oppose the use of “app-based cars.” But during the rally, drivers and supporters railed against Uber, chanting “No more Uber!” And despite his attempt to cap the competition, Mr. de Blasio also proved unpopular at the rally, with several signs knocking him.

At issue, the participants said, was fairness. Mr. Avella said if medallion drivers have to have a certain amount of insurance, or stick to a set fare (Uber has come under fire for using “surge pricing” to up fares when demand is high), then Uber should have to as well.

“You can’t set up a situation where people who have invested their entire small fortunes, the family fortune, into getting their medallion so they can have a better life, part of the American dream, and then snatch that away from them,” Mr. Avella said.

“After years of facing no competition and exploiting drivers, taxi medallion millionaires will now do and say anything to stop the flood of drivers switching to Uber,” Uber spokeswoman Alix Anfang said. “The facts are clear—each Uber ride contributes four times as much tax as a taxi ride, Uber driver-partners are licensed and insured the exact same way taxi drivers are, Uber driver-partners are earning more while being their own boss and serving communities outside of Manhattan where taxis rarely go.”

Those at the rally painted a different picture. Norman Siegel, the civil rights attorney who lost a Democratic primary for public advocate to Mr. de Blasio, emphasized the diversity and humble beginnings of medallion owners, many of whom are recent immigrants—and said they’d be a force to be reckoned with, with 42 percent of the 13,400 medallion owners being individual owners.

“We’re talking about a group that’s over 5,000 people. They can become a very sizable political policy force in the City of New York. They must be included the process,” Mr. Siegel said.

But that group was not a sizable political policy force in the most recent fight over Uber, dominated as it was by the millions spent on television and direct mail by Uber and rebuttals to the e-hail service from the likes of Mr. de Blasio, a handful of Council members, and taxi bigwigs like Mr. Freidman. It’s unclear why the individual owners chose now to make a stand, though they said they’d like to play a role in rule making process moving forward.

“The administration and Council are taking a broader look at the for-hire vehicle sector that ranges from passenger and worker rights, to contributions to public transit, to accessibility for people with disabilities,” de Blasio spokesman Wiley Norvell said. “And we will simultaneously engage stakeholders in the taxi, livery and black car sectors about ways to improve conditions for drivers and passengers.”

As part of the administration’s agreement with Uber, the city will study that business and gather data from the company—but has said it will also be looking into the yellow taxi industry, including ways to better working conditions—though that might help drivers working for larger medallion owners more than those who drive their own cabs—and ways to help the industry offer a more attractive product in the face of new competition.

Satnam Singh Parhar, who is running for the Queens City Council seat vacated by Mark Weprin, said he was “sick and tired of medallion owners and drivers being treated like second class citizens.”

“I say shame on you, New York City, for making two sets of rules—one for the app companies like Uber, and another for medallion cab drivers,” Mr. Parhar said.

He said he isn’t “against Uber,” but wanted it to follow the same rules. For example, he said medallion drivers cannot have a smartphone in the front seat, while Uber drivers use them to pick up hails and track rides—which he said violated the mayor’s Vision Zero plan “and is a dangerous way to drive.” 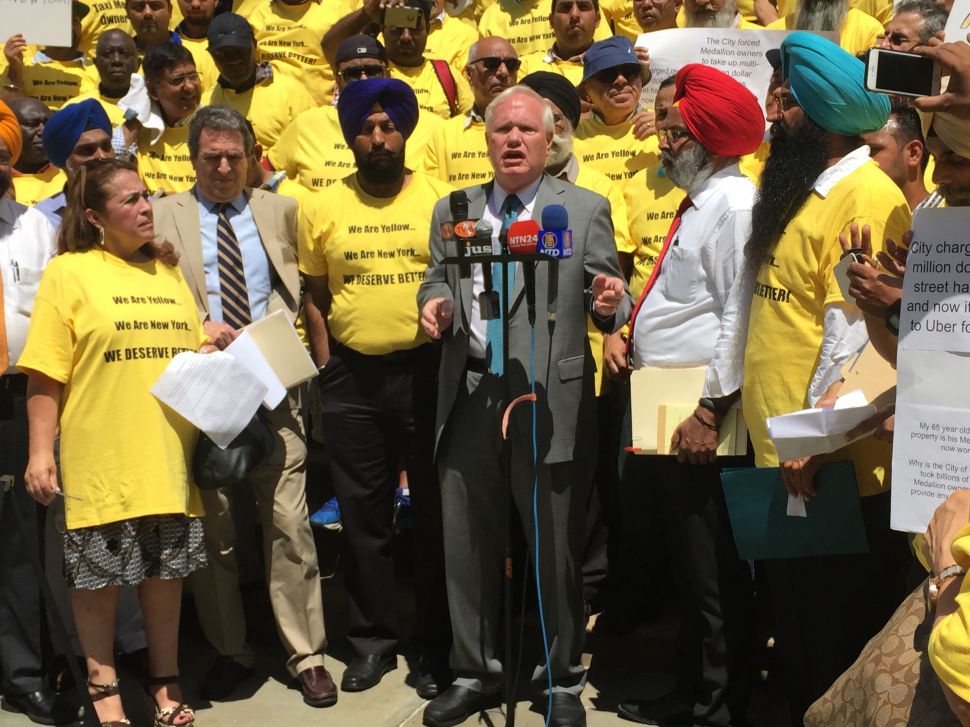