Saturday night, 10 p.m. in front of New York’s National Museum of the American Indian. 210 of the financial world’s sharpest minds—some stressed, some focused, and some wearing miners’ head lamps—are crowded around an enormous black steel sun-shaped structure that definitely wasn’t there the day before. A loudspeaker blasts a dissonant synthesizer tune, sounding like what The Phantom of the Opera might play on the organ if his job was to summon the aliens from “Close Encounters of the Third Kind.”

Though an onlooker might well suspect that these captains of industry were either planning or preventing the world’s doom, they were in fact playing an all-night, citywide, puzzle hunt: Goldman Sachs’ Midnight Madness. The over-the-top immersive game raised $3.1 million for Good Shepherd Services, a charitable New York organization devoted to helping underserved children and their families.

Among the 20 teams of 10 players—who had paid the entry fee of $50,000 per team—half or so were from Goldman; many were from other financial companies like KPMG, Bridgewater Associates, and Pine Capital Management. There were also a few semi-professional puzzle players in the mix. Pine’s team, calling itself Whiskey Tango Foxtrot, took first place; Bloomberg’s team placed second, and Cantab Capital Partners—who had all flown in from the U.K. just for Midnight Madness—placed third. The prize? zero dollars and bragging rights.

The level of competitiveness is no joke. Tom Howat, one of the members of Cantab’s team, Imitation Game (an homage to their countryman Alan Turing), was so keen on staying alert during the grueling nocturnal ordeal that he spent all of last week adjusting his sleeping schedule so as to trick his body into thinking that nighttime was actually daytime. Though Midnight Madness started at 8 p.m., Mr. Howat said, his body felt as fresh as if he had just awoken.

“For me, it’s 5am right now. My day is just getting started,” he said.

How hard were the puzzles? Some players felt they were sadistic, with one player using the game’s public bulletin board to post a photo of the evil clown-masked murderer from the Saw movies. Here’s one of the easier ones. The only clue I’ll give you is that Imitation Game found it impossible because of its American pop culture references (Think you know the answer? Email gc@midnight-madness.org with your entry and find out):

The puzzles were lovingly created by Game Master Mat Laibowitz, the progenitor of Midnight Madness. His inspiration came from a truly schlocky 1980 Disney comedy entitled Midnight Madness, featuring an extremely young Michael J. Fox in his first-ever big-screen role. The film is about a crazy mad-scientist type, a university student named Leon, who pits teams against each other in, obviously, an all-night elaborate puzzle hunt.

Mr. Laibowitz put on his first Midnight Madness in 1996 whilst a student at Columbia University. Initially, it was a very low-budget version with post-it notes on trees. In 2012, Goldman partner Elisha Wiesel (son of Nobel Peace Laureate Elie Wiesel), began running the game. Under his aegis, the puzzles become significantly more high-tech and elaborate. This year’s Midnight Madness required 14 permits and permission to open the Metropolitan Museum of Art an hour early on Sunday—just for the game, not for the outside public.

As an added twist, this year, only about half the puzzles were of the typical brainteaser variety. Mr. Wiesel hired professional dance troupe Third Rail to put on six live performances throughout the night—each of which contained the clues required to move on to the next stage in the puzzle. In fact, one of the puzzles required players to learn to dance a sort of foxtrot that Third Rail created specifically for the game. Suffice to say none of the players saw that coming, and for some, this was among the more annoying puzzles. One gamer told me, “That was my favorite part of the evening, seeing these nerds who couldn’t put one foot in front of the other.”

But a little humiliation is a small price to pay, given that many players shared the sentiment of Imitation Game’s Ewan Kirk: “[Midnight Madness] was one of the most incredible experiences of my life.” 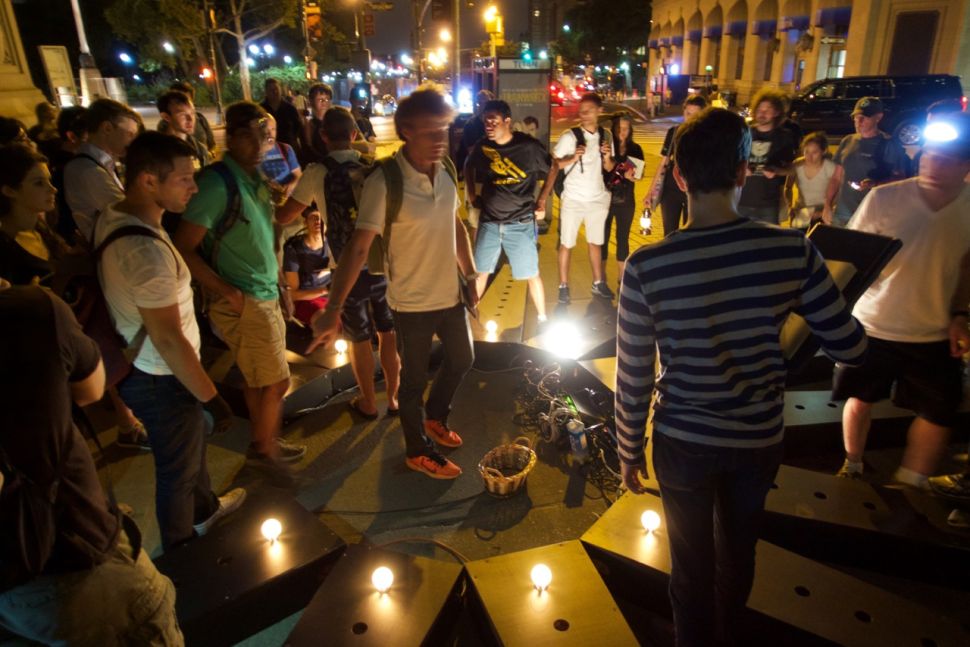