Donald Trump has widened his national lead in the latest Monmouth University Poll of Republican voters and now holds a more than 2-to-1 advantage over his nearest rivals, Jeb Bush and Scott Walker.  The poll also found that few GOP voters like the idea of a “Top Ten” debate, with many preferring back-to-back debates with the field randomly split in half.

When Republicans and Republican-leaning voters are asked who they would support for the GOP nomination for president, Donald Trump leads the pack at 26%, with Jeb Bush (12%) and Scott Walker (11%) following behind.  The remainder of the “top ten” includes Ted Cruz (6%), Mike Huckabee (6%), Ben Carson (5%), Chris Christie (4%), Rand Paul (4%), Marco Rubio (4%), and John Kasich (3%).  Carly Fiorina and Rick Perry each earn 2% and Bobby Jindal, Rick Santorum, Lindsey Graham, George Pataki, and Jim Gilmore each get 1% or less.  Another 10% of GOP voters say they still are unsure who they will support for the party’s nomination.

“Republican support for Donald Trump just continues to grow with no clear sense of who his constituency really is,” said Patrick Murray, director of the independent Monmouth University Polling Institute in West Long Branch, NJ.  “This makes it very difficult for his opponents to figure out how to take him on in the upcoming debate.”

The top ten candidates in the field, based on a national polling average, will make it into the first sanctioned GOP debate later this week.  Few Republican voters are on board with this idea.  When presented with three possible scenarios to determine who gets into 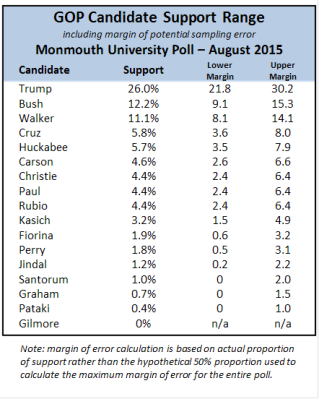 the first debate, nearly half (45%) prefer to have two back-to-back debates with the field randomly split in half.  Another 29% say it would be better to put all the declared candidates together on one stage.  Just 23% favor using polls to select a “top ten” group of candidates for the main debate while having the remaining candidates participate in a separate debate.

“I suppose Fox hoped that a top tier would emerge by the time the first debate rolled around.  But based on current polling, there’s no good rationale for arbitrarily selecting a top ten,” said Murray.

The Monmouth University Poll was conducted by telephone from July 30 to August 2, 2015 with 1,203 adults in the United States.  This release is based on a sample of 423 registered voters who identify themselves as Republicans or lean toward the Republican Party.  This voter sample has a margin of error of +4.8 percent.  The poll was conducted by the Monmouth University Polling Institute in West Long Branch, NJ.