(Spoilers for all of Mr. Robot’s first season)

“You knew all along, didn’t you?” Elliott Alderson asked us, his collective imaginary friend, in last night’s episode of Mr. Robot. And the answer, at least on my part, was: “did we?”

I mean, of course it was there all along — Christian Slater’s Mr. Robot is simply Elliot’s own Tyler Durden, a manifestation of his guilt-ridden and damaged mind molded in the image of his father. Of course Mr. Robot isn’t actually Elliot’s long-dead-or-so-we-thought dad, who had somehow been hiding his existence from his own son for 20 years. It was all there, the way Elliott would sink into the background any time Mr. Robot addressed FSociety, the way Mr. Robot would participate in discussions but the other members wouldn’t exactly acknowledge his input. Mr. Robot was always in the backseat of the car, or appearing at just the right moment not to interfere, but to dispense advice. We knew. We knew all along.

It’s a hard thing for a TV show to do, to confuse its audience. Okay, no, it is easy to just confuse. Anybody in the world can throw 100 loose strings at you, tie two together, and say “tada!” Just ask True Detective season 2. But it is a complicated thing to confuse your audience not only successfully, but in a satisfying way. The amazing thing Mr. Robot does– and yes, Fight Club does too, the movie Mr. Robot owes so much to including a closing song — is that in laying out an answer it only opens up more questions. But unlike Fight Club, Mr. Robot has to continue to answer those questions after the closing credits. From the pilot, the general consensus was “yeah, Elliott is Mr. Robot.” But the show presented just enough evidence to the contrary. Mr. Robot bumping into that patron in the cafe outside Steel Mountain. Mr. Robot having separate one-on-one conversations with Tyrell, Darlene, and Romero. Mr. Robot pushing Elliot off a pier on to the rocks below.

It boiled to a point where the question wasn’t “is Mr. Robot real?” It was: “is anything real?” One of the best subtle parts of this show is the fact that mostly every character calls E Corp “Evil Corp.” You get so used to it that you forget this isn’t the name of the company, it’s just how Elliott hears it. Creator Sam Esmail presented to us, every single episode, that some of this story is in Elliot’s head. The list of things we questioned only grew: the suits following Elliot. Whiterose. The Dark Army. FSociety itself. Elliot himself.

That’s why last week and yesterday’s episodes are not so much “plot twists,” but more of a locked door opening to reveal another locked door. We are still in the same plot — FSociety’s hack is still set to take down E Corp’s data files — but the rules have been changed. When a mystery builds to a reveal and only the reveal, the answers to your questions can sometimes fall flat. The confusion itself shouldn’t be the story. It’s the difference between solving a mystery and participating in an Easter egg hunt. A development isn’t shocking just because it happens. It’s shocking because of what it means. And what last night’s episode means is that maybe we really did know the whole time.

That’s what Mr. Robot does so well. We were both complicit in knowing Mr. Robot’s secret and stumbling along with Elliot at the same time. We knew the obvious answer, but were still shocked when it came because of what it meant. We allowed the idea that nothing we were seeing was real, while refusing to accept that as the truth. We were Elliot’s imaginary friend in every sense. So when he asks us if we knew the whole time, the answer is not so simple. Because while he’s talking to us, he ‘s also talking to himself. Part of Elliott knew Mr. Robot didn’t exist, but he didn’t want to see it that way. “You’re going to make me say it, aren’t you?” Elliot asks us. “I am Mr. Robot.”

So where are we now, as we head into next week’s finale? Elliott and Tyrell are in an abandoned arcade off Coney Island, standing next to an ancient popcorn machine that also happens to contain a gun. Timid, social outcast Elliot doesn’t know how to use a gun. But Mr. Robot does. At that moment, which one is real? 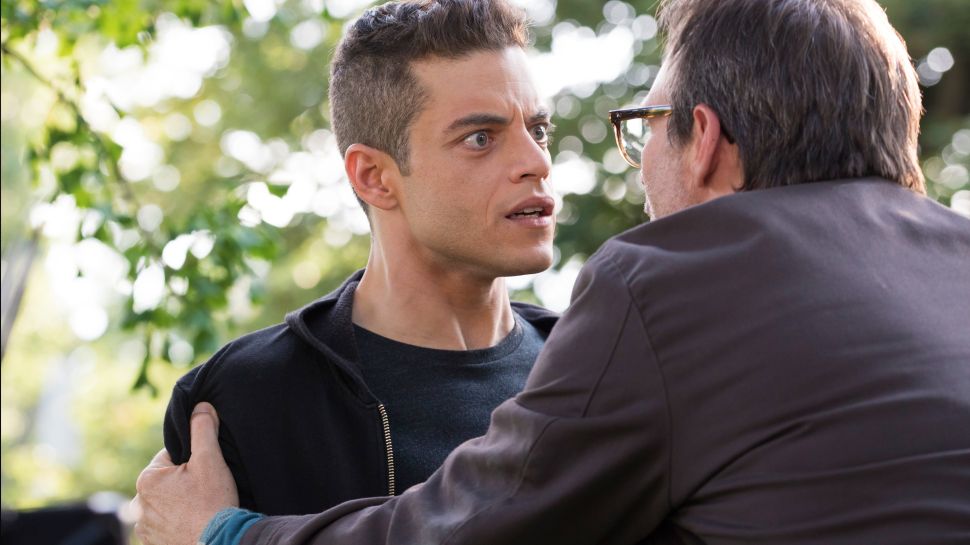