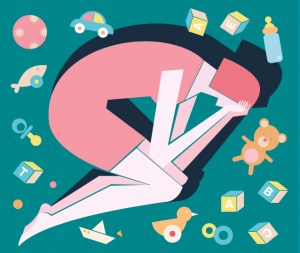 Sarah wanted to sex things up with her husband and buy some hot new lingerie. She asked me to come along. I said of course but was still shook up. A few days earlier, I was enjoying a frittata at Le Pain Quotidien when she popped the big question.

“Nate and I were wondering if you would be our egg donor?” she asked, placing her fork down gently. “We could freeze some for you, too.”

I giggled uncomfortably and then blurted, “Why would you want my eggs?”

I thought how I’d love to give her this gift in the abstract, but it all felt so big. I wondered if I could look at my child—her child—a child with my features, and not fully want to mother but love from afar.

I was flummoxed she chose me, but Sarah assured me despite my self-perceived flaws I was lovable. She even had a dream that her future child sort of looked like me.

Up until then, I hadn’t really given my eggs much thought. But if there were anyone I would give them to, it would be Sarah. Our affection had been almost immediate: we were paired together in our college drama class and our first theatrical exercise was to ascribe flowers to each other. I told her she was a wild lupine and she said I was a sunflower.

Sarah was ambitious, type A, and on her way to becoming a top Hollywood exec. At age 30, she found a lump in her breast and was diagnosed with stage III breast cancer. She tried to harvest her eggs before starting chemotherapy but time was of the essence and it proved impossible. Sarah would beat breast cancer but then it would spread to her brain and she’d beat that, too. She’s a fucking warrior. I told her I was open to donating.

So a few days later, I met up Sarah at a lingerie shop called Underneath It All. The saleswomen, survivors themselves, brought forth seductive, lacy options. Sarah, now single-breasted, defiantly showed her scars as she tried on a delicate, violet bra. Her face lit up. She was beautiful.

I got very emotional. I thought how I’d love to give her this gift in the abstract, but it all felt so big. I wondered if I could look at my child—her child—a child with my features, and not fully want to mother but love from afar. Or maybe I could just be that really cool auntie, there for the fun without the responsibility.

Sarah modeled a sultry black lingerie set. I gave her my best wink and said, “Someone’s getting lucky tonight.”

I wondered about having kids myself. When did someday turn into today? Seemed like once I hit my 30s, everyone was coupling off and expecting…all these expectations.

Suddenly I felt nauseous, my legs went soft and I just fainted.

Sarah and the two nice sales ladies helped me to the wig room. I told them it must be some sudden flu setting in. They brought me water and crackers and made a big fuss. These brave women had battled for their lives and I was a complete basket case and the worst friend to take lingerie shopping ever.

I reluctantly told Sarah I couldn’t go through with the egg donation. She understood and has since found a surrogate and is narrowing down an egg donor. I asked her about adoption and she said that since she was now stage IV, a five-year clean bill of health is required. And Sarah wants a baby more than anything.

I try to limit time with my friends who have babies. Or rather, they don’t have the time. It brings up feelings of being left behind. I often stand there awkwardly, watching them, mother and child, sort of the way I do with cats. They fascinate me. What’s worse is these cute children remind me of me. They are little mirrors reflecting back old memories of need.

For instance, I’ve been trying to see my friend Penelope for over a year now. Just today we confirmed meeting between 4:30 p.m. and 5:15 p.m. to accommodate her son’s nap and dinner schedule.

I often stand there awkwardly, watching them, mother and child, sort of the way I do with cats. They fascinate me. What’s worse is these cute children remind me of me. They are little mirrors reflecting back old memories of need.

I show up at the Vesuvio Playground on Spring and Thompson early to get in some journaling. I find a nice slice of sunlight and all is delightful until some beefy security guard disrupts my reverie.

“You don’t have any kids,” he says, telling what I already know.

“Are you kidding? I learned how to ride my bike right there.” I pointed toward the jungle gym. “This my childhood park.”

“If I let you in,” he responds, “then I have to let everyone in and there’ll be no telling who’s a pedophile.”

He rolls his eyes. I gather my shit, sputtering about injustice just as Penelope and little William arrive. I grab ahold of my VIP ticket and give that park ranger a smug look.

William takes the lead and we follow him to the slide. Penelope asks me about my dating life. I tell her things are over with Jerry but there is this one guy I keep running into in my neighborhood who gives me a jolt.

He wipes out and cries. She kisses his plump cheek.

“Is that a bicycle?” She points and William’s eyes widen.

“I had lunch with Richard.” I update her about an ex.

“You’re still in touch?” she asks.

“We have lunch like every three years,” I say as I watch William, now banging on a plastic toy stove some parent had dumped.

“He said I should seriously consider freezing my eggs while I’m still young-ish and that there are payment plans.”

“I’m so glad you didn’t end up with him.” A disgusted Penelope lifts William onto a link bridge and does an impossible leap after him as though she were an Amazon.

“No idea,” Penelope laughs. “You just do these things as a mother.”

William hesitates. “Are you going to cross that bridge, William?” I say in a high-pitched voice.

He grins and then runs across with jerky legs, Penelope following him back and forth like a pendulum.

“I’m just super career-focused right now,” I said, holding on to the bars. “But sometimes I wonder, you know?”

“Babe, your intuition is strong.” She takes William into her arms and focuses on me. “Just be open and when you meet someone you really like, it’ll be the next step or it won’t. I didn’t read all of that Lean In book, but I think what she was trying to say is take it day by day. Welcome the challenges and if you fail, well, we all fail. That’s how we ultimately succeed.”

I look around the park, and like one blatant metaphor all the kids are falling and getting right back up.

On my way home, I receive a call from Sarah. Looks like she found an egg donor and may be starting a family as soon as August. I get a skip in my step.

I’m going to embrace what’s in front of me now, open myself to all possibilities, and trust. And maybe one day I’ll fall in love, have some sex and the sperm will go into my egg like it does, or it’ll all take place in a test tube, but until then my eggs are off the hook.

The character of Sarah is based on the real-life events of Trish Russo, who is currently filming a documentary about her journey to start a family through egg donation and surrogacy. cyangray.org 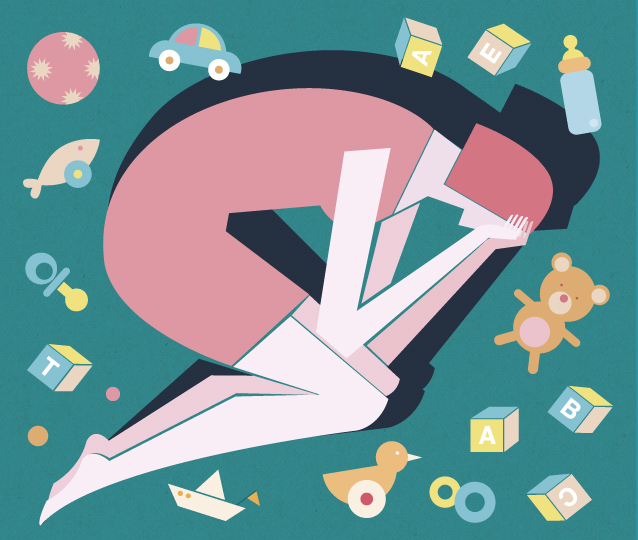