Ask the average New Yorker, and they’ll tell you they believe the bad old days are back

That was the finding of a new Quinnipiac University Poll released this afternoon, which found that only 33 percent of New York City voters rated the quality of life here as “very good” or “good”—the lowest number ever measured by the university, whose trend line for the question dates back to 1997. And 48 percent of voters said quality of life has dropped in the last few years.

That dismal outlook comes just a day after Mr. de Blasio earned his all-time-lowest approval rating in a Quinnipiac Poll released yesterday—which his administration noted came after he was hammered by negative advertisements during his failed attempt to cap Uber. And it comes on the same day the mayor is seeking to offer one solution to quality of life complaints: a comprehensive plan to tackle the issue of homelessness.

While Mr. de Blasio’s numbers are at a record-low, the number of New Yorkers who think crime is a “very serious” problem in New York City is at an all-time high —48 percent. That’s higher than the oldest entry on Quinnipiac’s trend line for that question: in 1999, only 35 percent of voters said crime was “very serious.”

“The quality of life in New York City isn’t good and it’s getting worse, many voters think,” Maurice Carroll, the university’s assistant poll director, said in a statement. “It’s not just newspaper hype about the return of the bad old days, New Yorkers say. Many are seeing more homeless people on the streets and encountering more pan-handlers.”

In response to the poll, Mr. de Blasio’s administration pointed to crime statistics and efforts to stem violent crime that seems to be more common in summer months.

“The fact is, 2015 is shaping up to be one of the safest years on record, with crime down 6 percent from last year. And the addition of 1,300 new police officers to the force, the expansion of community policing, and the success of ‘Summer All Out’ promise to deepen public safety and strengthen the relationship between police and community,” spokesman Wiley Norvell said. “New York City is the safest big city in America, and Mayor de Blasio and Commissioner Bratton are keeping it that way.”

The mayor has turned to crime figures before—pointing to them repeatedly when he is asked about the perception of rising crime and homelessness, now a perennial question at his news conferences. He has blamed some of the perception on the media and has urged people to “stop the hysteria.” But Mr. Bratton himself said yesterday he understood why people perceived an increase in crime—saying that it was not just the media, but the increase in the city’s visible homeless that was fueling the perception of diminished quality of life.

Crime and quality of life issues have dogged Mr. de Blasio since even before he became mayor. His Republican opponent Joe Lhota famously ran television ads warning of a return to the “bad old days.” Critics have portrayed him as soft-on-crime, and the mayor must balance the interests of left-wing activists who want to see a more hands-off police department—especially after a federal lawsuit over stop-and-frisk and the death of Eric Garner during an attempted quality of life arrest—and his need to keep crime at record lows. 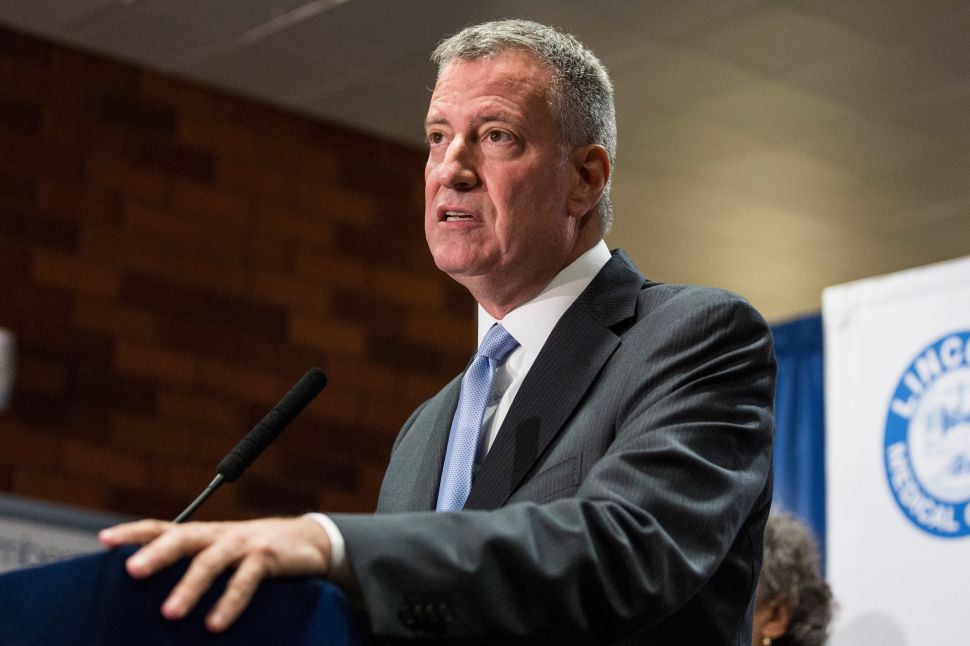