1. The tabloids: The appearance of all-but-nude body-painted babes in sanitized Times Square—once home to strictly family friendly characters like anti-Semitic Elmos and cop-punching Spider-Men—gave editors of the city’s scandal sheets the opportunity to plaster their pages with sexy pics and indignant headlines, engaging in what one Observer contributor described as the unbeatable paper-selling combo of “simultaneous shaming and titillating.” And their shaming is, apparently, getting results.

2. Deez Nuts: Because really, all of us are bored 15-year-old Iowan farm boys who spend too much time on Urban Dictionary at heart. Brady Olson of Wallingford, Iowa grabbed the American electorate by the…well, you know…when he filed to run for president of the United States using the name Deez Nuts—and began pulling 8 percent of the vote in Iowa and 9 percent in North Carolina, according to Public Policy Polling surveys. Mr. Nuts told Rolling Stone he was willing to go with his campaign “as far as America wants to take it.” Still waiting on numbers for the dark horse candidacies of Yo Mama and Mike Roch.

3. Everyone who thought they had caught Legionnaires’ disease: You can all relax, it’s probably just allergies. Or a summer cold. Or maybe it is Legionnaires;, but you didn’t get it from the South Bronx’s Opera House Hotel. City Health Commissioner Dr. Mary Bassett yesterday identified the landmark lodging house’s cooling tower as the source of the Legionella bacteria that infected 128 people and killed 12, but also declared that the incubation period for the microbes had passed, meaning the outbreak is officially over. Contaminated cooling towers in the impact area in the Bronx have already undergone sterilization, and new city and state regulations enacted this week will force building owners to routinely disinfect the massive, moisture-exhaling air conditioning units going forward, so you can breathe a little easier.

WHO HAD A BAD WEEK

1. Bill de Blasio: Again. Even what appeared to be a supportive call-in from comedian Louis C.K. to a public radio show on Tuesday couldn’t put a good shine on the optics apocalypse that was the mayor’s last seven days. Mr. de Blasio made the decision to hit the gym in his old neighborhood of Park Slope mid-morning last Friday—and stayed there almost two hours while police and firefighters engaged a gang leader in a tense standoff on Staten Island that left an FDNY lieutenant hospitalized with gunshot wounds. Mr. de Blasio unceremoniously slipped out the back of the YMCA to avoid the reporters stationed in front, refused to discuss his ill-timed calorie burn at a subsequent press conference and seemed to give a defiant middle-finger to anyone who questioned his workout regimen by returning to the same gym midday this week.  Meanwhile, more potential 2017 challengers seem to crawl out of the woodwork by the day. Besides the “more likely” gaggle of Comptroller Scott Stringer, Brooklyn Congressman Hakeem Jeffries and Bronx Borough President Ruben Diaz Jr., oddball possibilities like Florida businessman Don Peebles and ex-NBA commissioner David Stern have emerged. Even Public Advocate Letitia James, a de Blasio ally going back to their days in the City Council, was mentioned as a potential contender to take the mayor out in a Democratic primary. Mr. de Blasio dismissively told his potential opponents to bring it on at a press conference yesterday. But with the return of nudity to Times Square turning heads and wringing hands, and a still-mushrooming homelessness crisis, the sense of a city—and an administration—careening out of control only grows.

2. Michael Bloomberg’s legacy: Mr. de Blasio’s foibles may be leading some New Yorkers to cast a longing look back at Mr. Bloomberg’s chilly technocratic reign, but the ex-mayor’s mark on the city may be facing a slow erasure. One of Mr. Bloomberg’s flagship development visions, the $3 billion revitalization of Willets Point near Citi Field, which would exile dozens of corrugated iron auto body shops to make way for a massive shopping mall, office space and apartments, now appears on the brink of disintegrating. Mr. de Blasio’s administration failed to appeal a court ruling obstructing the shopping center’s construction by a deadline Wednesday, leaving Bloomberg-picked developers Related Companies and Sterling Equities to fight it out on their own. Mr. de Blasio had feuded with the two real estate giants over his attempt to include more affordable housing in the project. Then, yesterday, Mr. de Blasio said he was considering tearing out Mr. Bloomberg’s Times Square pedestrian plaza—a symbol of the last administration’s clean-air, business-friendly agenda—to keep nearly naked ladies and strange costumed characters from plying their trade at the crossroads of the world.

3. Hillary Clinton: The former senator from New York accidentally fed the Internet meme machine by trying shrug off press questions about her email server at a town hall in Nevada on Tuesday. The gesture comes as the FBI pores over the private “homebrew” email system Ms. Clinton used to handle some official matters while serving as Secretary of State, in an effort to determine whether the account was used to handle classified information—which the Democratic frontrunner denies. The State Department possesses paper copies of roughly 30,000 messages Ms. Clinton deemed work-related, but she deleted 30,000 others she has said dealt with personal subjects. It is unclear whether federal agents can recover the content of those emails, and it is unclear whether Ms. Clinton violated official State Department policy, though a federal judge said yesterday he believed she did. So far, her strategy to defuse the controversy has been to toss off groaners about how Snapchat messages “disappear all by themselves” and about wiping her server “with a cloth.” The effectiveness of this approach is perhaps apparent in the growing number of voters who say they see her as untrustworthy.

Mr. de Blasio and Ms. Clinton both have to reclaim control of their public images. The Democratic Party’s nomination is both of theirs to lose. But they both have to overhaul how they are interacting with the media and with voters. Locally, many officials are already arguing that ripping out pedestrian plazas as a prophylactic against scantily clad women and creepy cartoon characters is like throwing out the baby and keeping the bath , so we don’t expect that to go anywhere fast.

Two weeks after a vote to defund reproductive center chain Planned Parenthood failed in the Senate, Brooklyn Assemblywoman Diana Richardson fired off a press release—complete with a Youtube video—defending the organization’s “high-quality, confidential and non-judgmental care.” A friend in need, indeed.

Deez Nuts picks the Times Square Naked Cowboy as his running mate, giving us the Daily News centerfold spread we’ve all been waiting for.

The Observer Politics Team, like everybody else with the option, will continue to avoid Times Square at all costs. 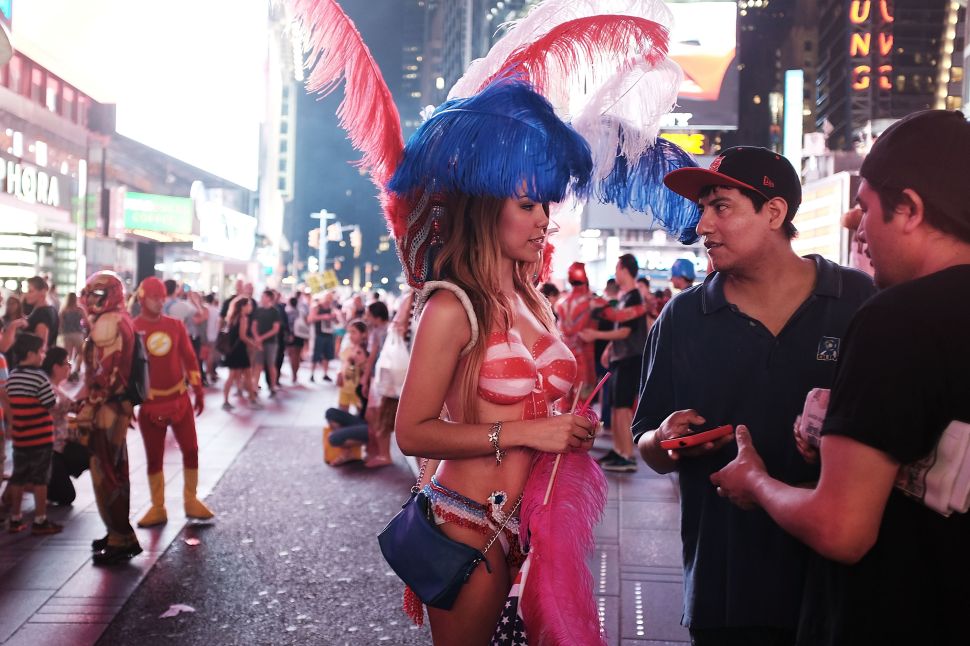