I caught up with Mark Duplass and Nick Kroll at the TCA Press Tour expecting to discuss The League, FXX’s raunchy and semi-improvised fantasy football comedy which begins its seventh and final season September 9th. I did not expect an insightful discussion on the future of television as a whole. However, when I mentioned that FX CEO John Landgraf had just given a highly thoughtful, college lecture-esque address on the subject moments before our interview, Mr. Duplass and Mr. Kroll had some input of their own.

Naturally, our talk did eventually turn towards The League, checking your fantasy football lineup on the toilet, and a character named Professor Poopypants. Which, television aside, are equally important topics.

Observer: Well, since Landgraf mentioned it, what are your thoughts on the future of television?

Mark Duplass: Well, I’m a selfish person, so I only think about it as it pertains to someone like me who wants to make really interesting, specific stuff. So if I’m HBO, or Netflix, or even if I’m Starz at this point. I’m thinking I have to get people to subscribe for 10, 15 dollars a month. For me, it’s less about finding one show that satisfies all four quadrants, it’s more about thinking ‘I’m gonna make this really specific niche show,’ like how Transparent kind of was by accident. Those people will come for that show. They will pay the premium for that show. And if I have 6 to 7 of those niche shows, and really get those specific subscribers, it will actually be a financial win for them, and it will be a huge creative win for everybody.

Are you thinking shows like Louie, where Louis CK has control of everything, creatively?

Duplass: I mean, yeah it opens doors for auteurs like Louis. But I’m also just thinking content-wise. Specific, as in like rather than Everybody Loves Raymond which is kind of a nice broader generic show, now someone can make a show and say: ‘This is a show about this plant, and this plant’s feelings about the house it lives in.’ And it’s so niche, and so specific, but it would get that audience to pay for just that content.

Nick Kroll: I think HBO were the first ones to where people were like ‘I need HBO to watch the Sopranos.’ And now, obviously HBO continues to do that, and people are watching Togetherness, a small show that Mark Duplass is vaguely responsible for.

Kroll: Okay, it’s the most pirated show in history of television. And then there are little niche shows like Game of Thrones that a specific audience wants to see. I think like FX and FXX has done a really nice job of that as well. The people that want to watch The League aren’t necessarily the people that want to watch The Strain. And yet, FX now has a brand that people come to. I think Netflix is doing that. You see shows like [Grace and Frankie], which is going to be different from Bojack Horseman. But you’re going to pay for Netflix to see one or the other. Like my mom is watching the Jane Fonda and Lily Tomlin show and is psyched to have Netflix for that reason.

Kroll: She steals my password, and it’s like my parents have been living off me for years and it’s driving me crazy. But it’s okay because I have their Spotify account. The tables are turning. But I do think that the larger game at play here…part of the reason there’s so much good television on right now is because there are fewer people making a shit ton of money, and there are a lot more people making a living. Because of that, people are getting better at what they do across the board, whether it’s actors or writers or DPs or costume designers or makeup artists. And yes people may not be making hundreds of millions of dollars that they used to make, but that means there are a lot more people getting better at their craft.

Do you think The League was an important of people coming into FX as a place where there is comedy?

Duplass: I do think it was. Clearly, Always Sunny really paved the way for that, it was certainly first up. But I think that having a little bit of a block was helpful, that you come and just see those two shows together. And they were really smart about the way they structured it. I mean, we made like no money on the first two or three seasons of this show, and they kept it cheap. What that did was – our viewership was really kind of low – but it made us un-cancellable because we were so cheap. I think that model is a really smart idea for comedies. You can have a cheap looking comedy and it really doesn’t bother the audience that much.

How did you sustain that low budget mentality across seven years? Was it the scripting, the way it was shot?

Duplass: I think a lot of it stems from the way that Jeff Schaffer, our showrunner, ran Curb your Enthusiasm, which was ‘let’s light this thing flat, let’s get three cameras up and running, and let’s just go for the joke.’ Just let everything else fall by the wayside and go for the fucking joke. You don’t necessarily have high glossy production values. But by putting that stuff away, it kind of creates a nice little funnel towards the joke and almost lays them up better.

Kroll: And we shoot multiple episodes at a time. And like those elements, even as we go into season seven, keep the show relatively easy to make, comparatively by what most shows would cost by season seven. Luckily, all of us are making stuff on our own, and I think we all understand how hard it is to get things done. And our team, everyone across the board, is just love of the game just want to make a funny show. Get it done fast and furious, and the joke is king.

Duplass: I don’t think there’s any pressure, because what I feel makes this show work is this extremely dedicated fan base that loves to spend time with our characters. As we tracked the show throughout the years, we always thought like ‘oh, they’re fantasy football fans, they want to see NFL players.’ And the fans would always be like ‘we don’t want to see them. We want to see the guys hanging out on the couch.’ That’s what they like. So to satisfy the demands of our fans, we sit on the couch and make fun of each other.

Kroll: Jeff and Jackie [Schaffer] are incredibly ambitious in certain regards. They do these big, huge jokes but they also, smartly, just put us on the couch. I think the last season reflects that. We’ll have this grand, outrageous bits but also continue to do what made this show popular, which is just a group friends that truly hate each other.

After seven seasons, are you both sort of fantasy football experts?

Duplass: To say that we are experts would be a massive overstatement.

Duplass: Excuse me, understatement. But we do have fans that expect us to be experts and are grossly disappointed.

Who can we expect to show up in the final season?

Kroll: We’ve got a bunch of fun guest stars. Obviously the NFL players, but like Rob Riggle, Ike Barinholtz, Seth Rogen, Leslie Bibb is back, a lot of [Jason] Mantzoukas. I’m really, actually…I feel like we have some really funny, good stuff coming this season.

Duplass: It really does feel like, the first two episodes we got to look at, and it seems to have subconsciously or consciously stepped itself up a little bit because it’s the final season.

Mark, I wanted to ask what the status of Togetherness is right now?

Duplass: We just wrapped our second season, and I’m in the edit room, the edit room being the trailer for The League. Super excited to bring it back out.

And Nick, something very near and dear to my heart…what’s the status of the Captain Underpants movie?

Kroll: Yes! I’ve gone in once or twice, and I’m going back in in a few weeks so it’s moving along. I am playing, of course, Professor Poopypants.

Which is probably the best IMDB credit you can possibly have.

Kroll: I know, well I have two characters named The Douche, and a character named Professor Poopypants, so I feel like I’ve covered both the back and front. And yet Ruxin is still the most vile character I’ve ever played. 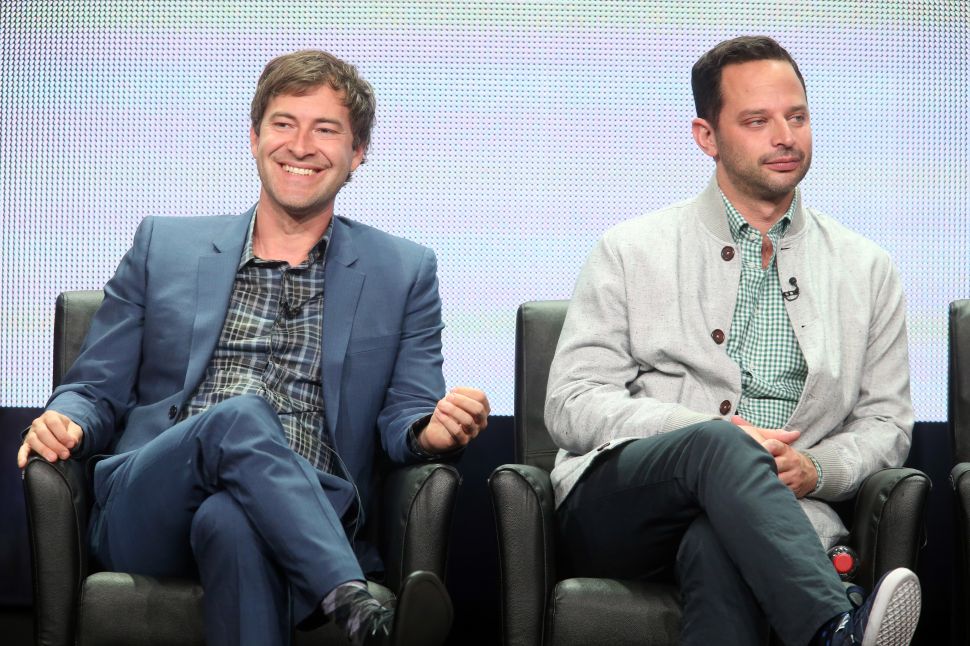