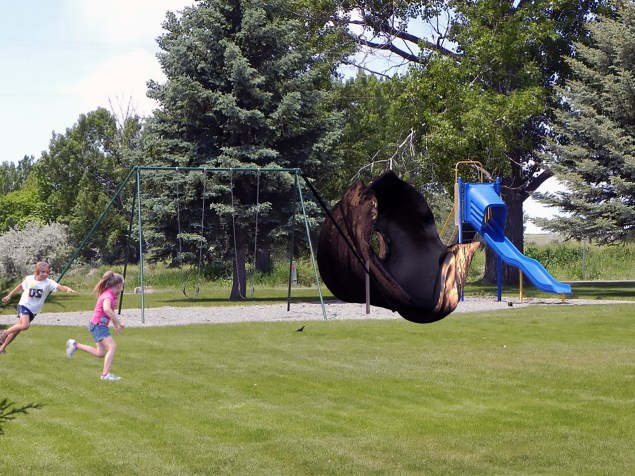 “I knew for sure there was trouble,” said artist Omer Golan when he first glimpsed the “update” email from the Museum of Jewish Heritage in his inbox about three weeks ago. He and his wife Tal, also an artist, were preparing their artwork for an exhibit there put together by Lab/Shul, a Jewish curatorial group.

The email said the museum was no longer able to include the couple’s work, a showing of shrapnel-dotted collages and photos accompanied by an artist’s talk, that had been slated to be part of a July 25 commemoration of Tisha B’Av. The work, called We Live For Tomorrow, deals with Mr. Golan’s unique and harrowing experience with trauma. But then, seemingly “out of the blue,” the museum had asked Lab/Shul, to exclude the Golans’ work, the couple said they later confirmed with the curators. (The principals of Lab/Shul did not respond to numerous requests for comment).

“[Management] felt that it was inappropriate for the museum,” said Mr. Golan. This after weeks of discussion, he said, with Lab/Shul. “We were really taken aback,” said Mr. Golan. “It’s obviously censorship.” It’s especially hard, they said, because they felt the work was such a perfect fit for the event, which deals with trauma. The couple’s pieces, which in some cases juxtapose bullet fragments with images of children on playgrounds, deal with Mr. Golan’s own recovery from a suicide bombing attack 15 years ago.

How does an Israeli bombing victim, whose work has been exhibited internationally, find himself in New York, his work excluded from a event that purports to deal with responses to trauma in Jewish life? The story begins one day near the beginning of the second intifada, 15 years ago. In a moment, Omer Golan’s life was forever changed. 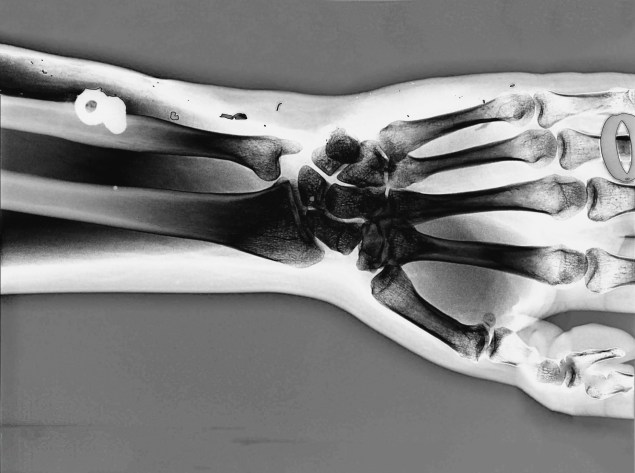 He was 20 and a member of the Israeli Defense Force, though part of the arm of the IDF that works on social projects, he said. Stationed in the West Bank, he approached a young man who was inexplicably standing in the middle of the street in 120-degree heat, unsure if he needed help.

Unfortunately the man was strapped head to toe with explosives, likely on a timer, and the young Palestinian detonated them just after embracing Mr. Golan. The explosion nearly took off his arm and he was in the hospital for six months.

“I woke up three weeks later in Haifa,” he recalled to the Observer last week, showing us the scars he still bares—even letting us touch the still submerged hunks of shrapnel that are now part of his arms, now that skin has grown over them.

“I got a whole new face!” he chuckled, stroking his own, soft cheek. The skin is taught and belies his war wounds, both emotional and physical. “The skin is grown in a lab,” he said.

Mr. Golan, 35, lives with his wife Tal, 34, and daughter Zoe in the Prospect Lefferts section of Brooklyn, now. The couple left Israel, first for Holland, then later for New York City, looking for “a place with less wars,” Mr. Golan said.

So they were surprised last week, when they learned there was one war here they never expected to have to fight in the U.S.: against censorship.

Why? When you are traumatized, you are “robbed of [certain] objects,” Mr. Golan explained. “You cannot see them any other way,” than as what they were when they hurt you. Repurposing the bullets and shrapnel in a playground make the shapes mean something else.

Mr. Golan’s photos, of parts of himself in X-ray, show how riddled with shrapnel he is to this day, while his collages of playgrounds overlaid with close-ups of bullet fragments pulled from his body, are an attempt to repurpose such symbols of violence. 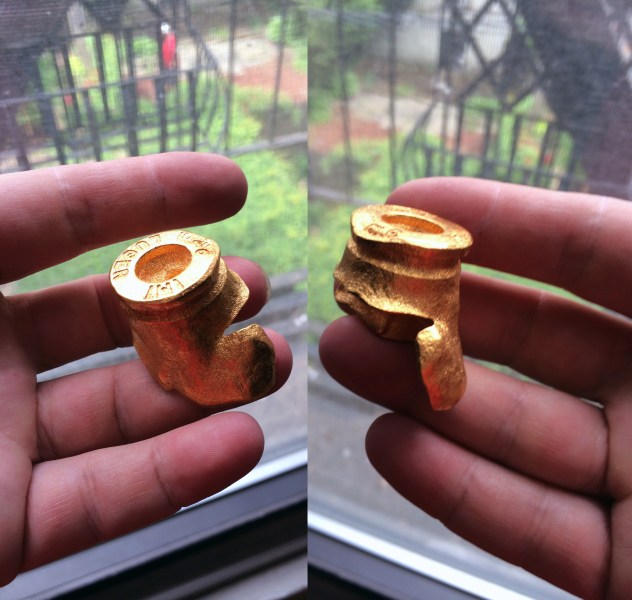 According to the artists, the curators told them they had immediately wanted to bring We Live for Tomorrow to the JHM (located in Battery Park City) after hearing that the theme of the show was ‘time.’ Time, which as we all know is the only thing that can heal all wounds, was essentially the main subject of the couple’s work. How through time and exposure, even objects, images and sounds that once traumatized us can be imbued with new meaning.

But the event at The Jewish Heritage Museum, called “NINE: A Night to Remember,” took place on July 25 without the Golans’ contribution. The website says the exhibition intends to “explor[e] the power of memory in the healing of collective trauma.” The evening had a talk by Masha Gessen called “Knowing When to Run Away: The Most Important Skill a Jew Can Have,” and took place on Tisha B’Av, a Jewish holiday that commemorates the tragedies that have befallen the Jewish people.

Gabriel Sanders, who handles press for the Museum of Jewish Heritage, said the exclusion was “not a political or philosophical matter. This was an aesthetic disagreement between two bureaucracies that are new partners in the process of trying to get into greater things.”

But the Golans said it’s hard for them to imagine that the charged subject matter is not the issue.

Since the museum rejected even the images of shrapnel playgrounds, the couple is weighing a Kickstarter campaign. The page will fund a three-dimensional virtual playground with shrapnel-inspired rides. It would be available to anyone to view and comment on, and they hope it can further their goal of beginning a discussion about violence and recovery from trauma.

“We just cannot accept [being told] ‘no, you cannot carry this message,” Ms. Golan said.

The couple also has a show coming up in Chelsea, at IMC Gallery; the solo exhibition starts Oct. 15.

Still, the sting of the entire affair has affected them. “I feel we are, at the minimum, owed an apology,” Mr. Golan said. 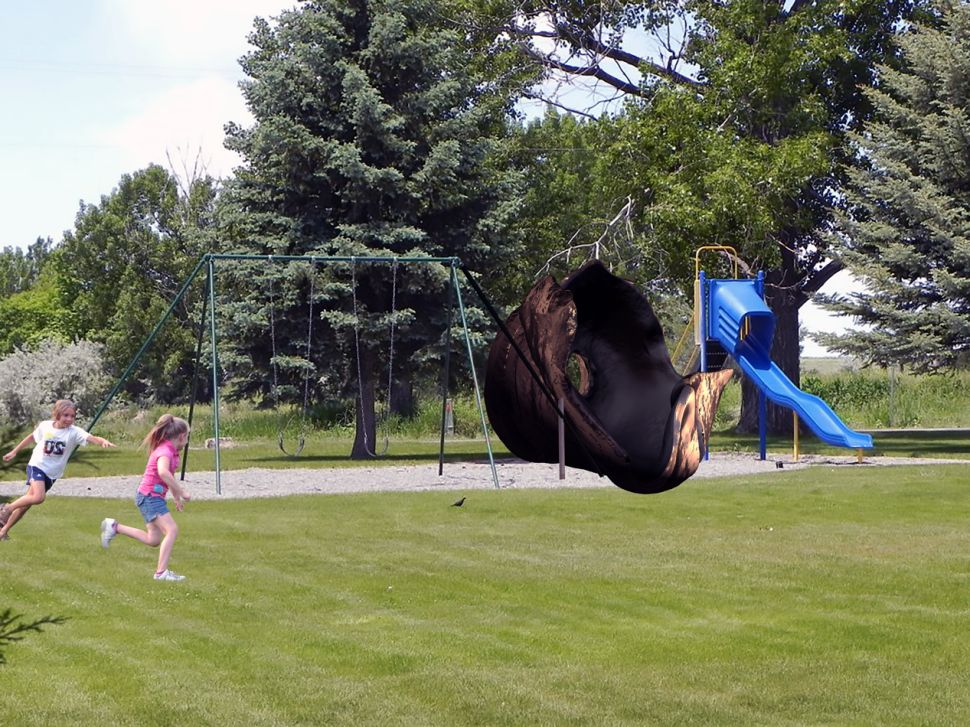