Body-painted women, topless from the waist up, have been spotted in Times Square, and like their colleagues in cartoon costumes, trading tips for photos. Call it a libertarian utopian vision come to life: lone entrepreneurs profiting from free expression. Alas, the stodgier elements of the city are aghast and frantically looking for a way to end the painted boobs’ reign of terror.

Mayor Bill de Blasio noted that these women aren’t breaking the law, thanks to a 1992 court decision that, as Donald O’Brien, one of the attorneys in the case explained, held that “the non-commercial and certainly non-obscene exposure of the female breasts was not” in violation of New York state law. The Daily News said that by making the pedestrian zone a park, the women wouldn’t be allowed to accept tips, thus destroying their business. Mr. De Blasio is reportedly is considering this idea.

The motivation for the tabloids’ anti-breast campaign is clear: Their conservative editorial boards can blast the mayor for his inaction on cracking down on “quality of life” infractions while boosting sales by planting breasts on page one; the simultaneous shaming and titillating is an editorial win-win. For the Times, the reasoning might be more insidious, as the paper’s publisher, Arthur Sulzberger, Jr., was a founder of the Times Square Alliance, which helped rid the area of sex shops to make way for chain stores and is now leading the media campaign against the bare breasted women.

Mr. de Blasio, who is suffering from sagging approval ratings, clearly feels the need to fire back at the media outrage, admitting that what the women are doing is legal, but that it’s wrong and that action must be taken to appease those with delicate sensibilities. A true liberal and real New Yorker would have told breast-haters—who seem to have never had a problem with the Naked Cowboy—to take a hike.

But he’s doing the opposite, and it’s another disappointment for liberals who thought Mr. de Blasio was going to deliver change. By contrast, while there’s a lot for a liberal not to like about Michael Bloomberg’s three terms in City Hall, no true fan of free expression could withhold applause when he stood up for the lower Manhattan Islamic center or the right of Brooklyn College to hold a pro-Palestine panel. It wasn’t just that he was upholding an American freedom, he was reminding the public that openness was part of New York’s essence.

Mr. de Blasio’s lack of backbone on the issue isn’t just an affront to free expression, it deals the city’s pearl-clutching class a victory in distracting from other more pressing social problems. And above all, caving in to social conservatism is a betrayal of the kind of tolerance the city allegedly offers to artists and outcasts who have to flee the confines of Middle America. If Times Square, already fully cleansed of its seedy past and relatively vice free, can’t tolerate a few women legally celebrating their own bodies, what chance does the rest of the city have in upholding its reputation where anything goes?

These affairs pop up with some regularity, from Hasidic Jews in north Brooklyn who protest bike lanes because they can’t tolerate scantily clad hipster women to the Fire Department canceling its official beefcake calendar because a participant had previously made a racy video. But this current ordeal speaks to the degree that New York City, once considered a city so unique from the rest of the United States, has become an antiseptic environment, where the chaotic and frenzied nature of the streets once seemed like a badge of honor and are now considered a pest impedes the city’s decline to becoming more an open-air Mall of America.

“The law doesn’t necessarily prohibit things that people find offensive,” attorney Mr. O’Brien said. “In all walks of life people need to be sensitive to the concerns of others, while at the same time not letting people who perhaps are overly prudish or motivated by strict religious tenets have a veto. If any place is going to be raucous and have a place of free expression, it’s going to be Times Square. You’re just going to have to live with it.”
He quoted legendary New York jurist Benjamin Cardozo: “The timorous may stay home.” 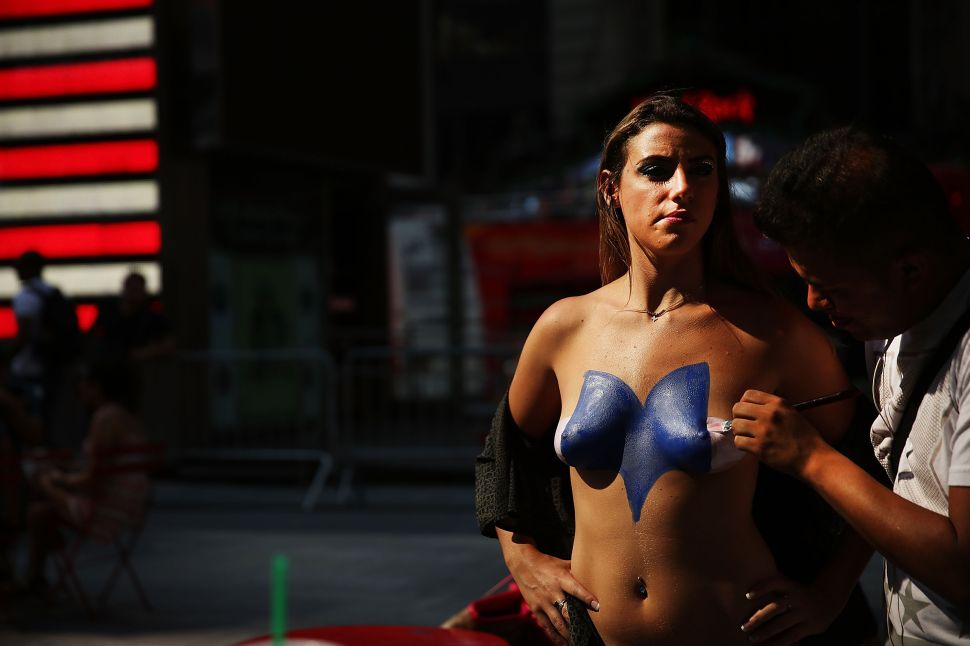