The de Blasio administration is pulling back its support from the Willets Point redevelopment, a Bloomberg-era project in which Related and Sterling Equities that would have built a development anchored by a million square foot mall on a parking lot adjacent to the Citi Field stadium. A recent court decision found the project would ential an alienation of parkland, but the city elected not to join Related in appealing the decision, The New York Times reports, which could halt the current incarnation of a project that the city has poured at least $400 million into so far. The city says it’s not interested in appealing a decision for a shopping mall-centric development and wants, at the very least, the affordable housing fast-tracked.

Meanwhile, those hoping that the mayor will do something about the super-tall luxury towers rising along the southern edge of Central Park will be disappointed to learn that the Department of City Planning thinks the slender new skyscrapers are great at enhancing the skyline and protecting older buildings, Crain’s reports. “Given the important role midtown Manhattan plays in the city’s economy, we have no immediate plans to reduce the current as-of-right density or bulk requirements,” Carl Weisbrod is quoted as writing in a letter to elected officials opposed to the erections.

Nor can those feeling bad about the current state of the city take any comfort in the fact that the St. Mark’s bookshop space remains empty more than a year after the store was forced to move because of rent hikes, Jeremiah’s Vanishing New York reports. He adds that the store is struggling in its less well-trafficked, smaller space on E. 3rd and looking for investors to stay afloat.

Alas, the 22,000 new units coming to Brooklyn in the next few years won’t do much of anything to help with the borough’s affordability crisis, Brownstoner reports. Given that so much of the new development is high-end, it “doesn’t satiate the demand for typical rental apartments in Brooklyn,” Jonathan Miller tells the website.

Speaking of non-typical rental apartments, a Brooklyn Heights townhouse at 113 Willow Street is asking $30,000 a month at the moment, also according to Brownstoner, and looks to be the highest priced rental in the borough. “Worth it?” they ask. How could it be?

Nationally, new homes have become slightly more modest, according to The Wall Street Journal, shrinking in size by one closet this past quarter.

At last, something Bill de Blasio and Andrew Cuomo can agree on: The governor said in a recent NY1 interview that he also wants to expunge the topless painted women in Times Square, The New York Times reports, which he claims are undermining the family friendly allure of a neighborhood that was cleaned up by government tax breaks. (As a special bonus, the grey lady refers to the women as “nearly nudes”… has someone on the copy desk has been watching Arrested Development of late?)

Unsurprisingly, many homeless New Yorkers take issue with their portrayal as a public menace, and Gothamist reports that a crowd of homeless people and advocates recently protested the criminalization and stigmatization of homelessness in the city of late.

The tax man always cometh, even for hipster darlings: Gothamist reports that Roberta’s, Bushwick’s absurdly busy pizza mecca, appears to owe the city some $480,000 in back taxes.

And last but not least, the SeaGlass Carousel, a long-awaited Battery carousel whose opening was considerably delayed by Hurricane Sandy, opens today. 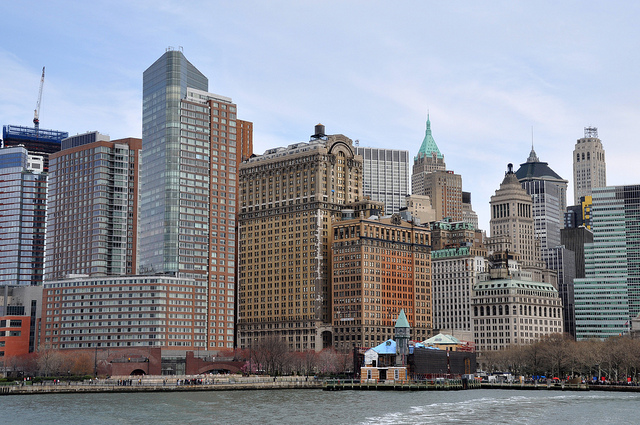