It took a while for him to find it, but Ed Burns has finally settled into the right era. His latest project has sent him to the ’60s, a decade that seems perfect for him.

Since the mid-’90s, he’s played a variety of on-screen roles, from love interest to a soldier in battle and he’s given them all authenticity, but he’s never been the stunning leading man or the all-out action hero, but rather just a guy who’s excelled at whatever role he’s stepped into. Finally, he has a role that seems custom made for him. That’s because it WAS made just for him—BY him.

Many know that while his acting work is to be commended where he truly shines is actually in his ability to create interesting and complex narrative drama. He was an indie writer/producer/director when the concept of independent cinema was still in its infancy. But then, as it so often goes in Hollywood, he jumped from his indie roots to bigger roles in projects that he didn’t create. He did well and is to be applauded for the career he’s made for himself, but it’s to viewers benefit that he’s back where he should be—crafting a narrative drama that has all the necessary elements to be a success.

Burns’ first foray into television is the TNT series Public Morals. A gangster saga focusing on both sides of the law, the 10-episode tale features the Muldoons, an extended NYPD Irish-American family, and the Pattons, a gangster family, with both tribes residing in Hell’s Kitchen. The families, connected through their locale, marriage and shared experiences, spend their time constantly walking the fine line between connecting and clashing.

While the series starts out a bit slow and confusing, this dragging is only due to the need to lay all the necessary groundwork for what’s to follow and things pick up considerably by the second installment. Very quickly it becomes clear that this is a series worth investing in, which is lofty praise, given all of the content in the currently crammed television arena.

Besides Burns, the always scary and convincing Brian Dennehy is on hand as a mob boss, along with the continually underrated Neal McDonough as a henchman. Michael Rappaport, as Burns’ partner, seems to have, much like Burns, found the perfect time period for himself. It may sound like a small thing, but both men pull off the period dress, particularly the hats, perfectly, and this cannot be said of all actors who attempt to believably wear ‘60s style garb.

Attire aside, while some viewers may miss the period piece via the void left by Mad Men, others may not want to revisit the era for some unknown reason, but take note that there is a certain sense of attained pleasure in watching a series in which there is absolutely no technology to lean on. The pureness of the police work, whether it’s pounding the pavement, meeting with witnesses, criminals, informants and the like, or just using wit, charm or threats to attain information, seems like something of a lost art, given everything that law enforcement now has at their disposal. And, it’s darn interesting to watch. There’s more actual human communication, less typing and texting.

Also helping out behind the scenes is another auteur you may have heard of—Steven Spielberg. While there’s nothing stunningly obvious that points directly to the master’s hand at work here, it’s a pretty safe bet that the man doesn’t put his name on just anything he’s asked to participate in. This might tell viewers a little something about the quality of the series, especially its visual presentation.

While the lack of technology in the series was mentioned earlier in this piece, the distribution plan for the series is taking full advantage every advance in the proliferation of portals that will make the content available for the masses. The series will stream new episodes online before airing them traditionally. One day after the series’ premiere on August 22, the first four episodes will be made available on VOD, TNT’s website and other outlets in an attempt to bring as much exposure as possible to the series.

Overall, the entire Public Morals squad thoughtfully presents an edgy noir style of storytelling that should it continue, just might prove to be the very thing that carries the series right into a second season.

Thank goodness for Ed Burns’ discovery that where he really belongs is in the ’60s. 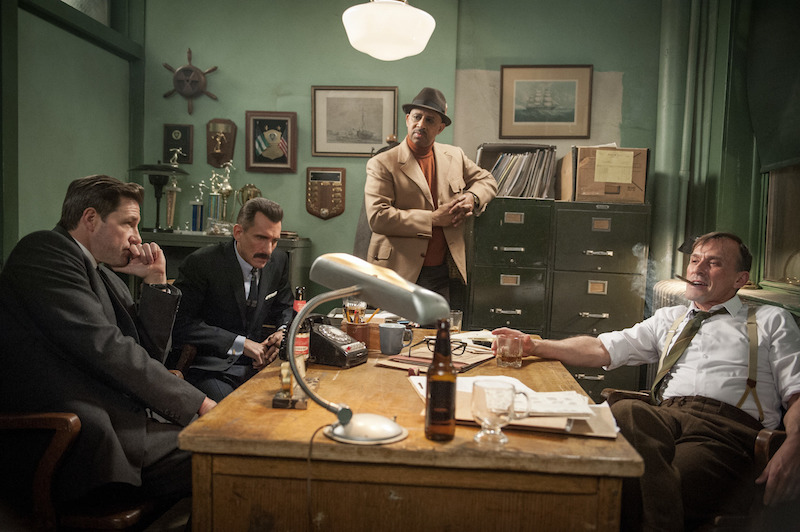