Speaking at an event celebrating the 95th anniversary of women’s suffrage in America, the two female pols—who helped create the party on Gov. Andrew Cuomo’s behalf last year—said that the WEP would announce which candidates it was supporting by September 15. Ms. Hochul noted that most candidates running this year are seeking local seats like county legislature and county executive, but asserted that 2015 would represent both a milestone for the party and for women’s issues.

“Governor Cuomo has long said that when New York leads, others follow,” Ms. Hochul said. “What we did last year, with the creation of the Women’s Equality Party, the first state in the nation to say that women’s issues are so significant that we believe that women—people should have the right to vote for a candidate who is on that line.”

The WEP platform is dedicated to the passage of the 10-point “Women’s Equality Agenda”–which would codify an array of anti-discrimination statutes, as well as unfettered access to abortion services. The latter has been a sticking point for the current GOP majority in the State Senate, which has passed the other nine points. The Democrat-dominated Assembly has voted in support of the entire package.

The lieutenant governor said that 2016, when state elections will be held, will prove even more important. She said candidates will be obligated to promise to back the Women’s Equality Agenda to get the line, and that it could make up the margin of error in close races for the State Senate, where the Republicans cling to power by a single seat.

“This is a battleship in how we’re attacking it in the state of New York, very progressively, under the leadership of Governor Cuomo,” she said. “Next year will be the transformative year. That is the year when we will be encouraging to seek this line and, again, it’s a statement of their priorities, that they’re standing with the women of their district, and we’re going to hold their feet to the fire to be successful.”

Ms. Quinn said capturing the State Senate was crucial to passing the complete Women’s Equality Agenda and gay rights legislation, even as she cheered the interest local elected officials have expressed on running on the WEP row this year.

“I myself am very excited that there’s hundreds, I think it’s like, what?—almost close to 400, definitely more than 300 local candidates that have asked for the line,” she told the Observer. “I think that bodes well in what will happen next year in our efforts to keep the Assembly majority, but really importantly get a progressive, pro-women’s equality, pro-LGBT majority in the State Senate, because I think that’s what really we’re going to need to move forward on a women’s and other agenda.”

Not every female leader at the event was so enthusiastic about the WEP. Manhattan State Senator Liz Krueger slipped away from the press conference when reporters began asking questions about the party.

When the Observer caught up with her a short distance away, Ms. Krueger argued that the WEP was unnecessary and possibly even damaging both to the Democratic Party and the cause of women’s rights.

“I don’t know that the Women’s Equality Party is being set up as left-wing in any way at all. I’m a Democrat, and I don’t actually support the Women’s Equality Party,” said Ms. Krueger, known as one of the most liberal members of the Senate Democratic Conference. “I don’t want the Democratic Party to not think that it’s the party of women. It should be the activist party on behalf of women’s rights and equality for women. It has been, and I’m not interested in seeing women shuffled off to a sidebar.”

Many politicos, including Mr. Cuomo’s 2014 Democratic primary rival Zephyr Teachout, have alleged that the creation of the Women’s Equality Party was a cynical ploy to draw liberal votes away from the similarly-initialed Working Families Party. The labor-backed WFP has excoriated the governor for his fiscally conservative policies despite endorsing him for election twice. 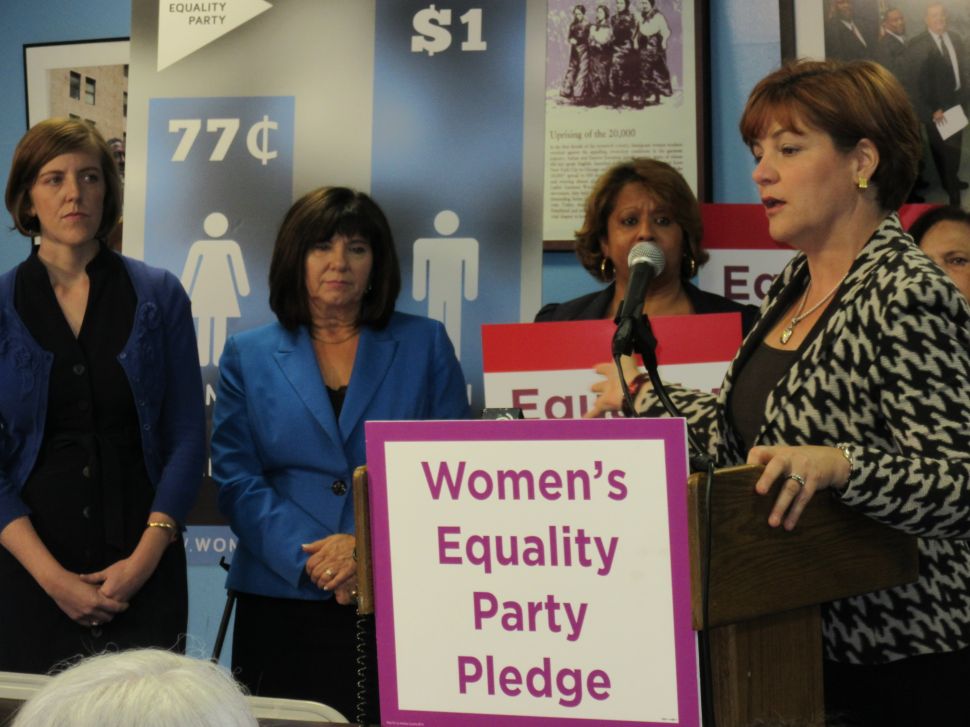