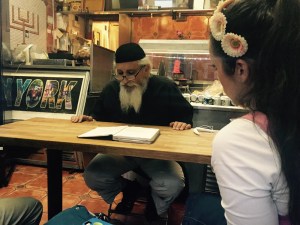 The rabbi has one burning issue in life: helping people “get married and stay married.” (PHOTO: Celia Farber)

“Welcome! Come in,” said a strong, Middle-East accented voice, as I hesitated at the door.

Behind the counter at Alibaba—the long-running neighborhood falafel restaurant on 85th and Amsterdam—stands a man with a long beard, gentle brown eyes, a yarmulke, and an engaging way about him. “Spicy?” he asks.

Seconds later he hands the sandwich to me. “Sit down,” he says. He’s a rabbi, it turns out—a fifth-generation Yemenite Israeli raised in Tel Aviv, where he still lives part of the year. He opened this place after Staples knocked out his stationery store, in the mid 1990s.

Most falafel cafes are “about” serving falafel. This one uses falafel as a medium for a much more important message, as I quickly discover as we begin to talk. Rabbi Moshe Harizy attends tirelessly to what many would consider a near hopeless cause: helping people (all ages, all walks of life) “get married and stay married.”

He helps them right here, right at this very table—a long wooden table that seats about eight—the only table in the tiny restaurant. In between preparing and serving truly outstanding Yemenite-Israeli cuisine—with lafah he bakes himself every morning—he is matchmaker, dating coach and spiritual teacher.

He grew up from the age of six cooking under his mother’s precise directions in their Tel Aviv kitchen—she had a blood disease that made use of her fingers impossible. Seeing his father’s unfailing devotion to his very sickly wife shaped his life’s philosophy. “One year my mother was in the hospital 200 days out of the year,” he recalls. “My father never complained. He was so devoted to her, and I respect him so much for that.”

Hundreds of couples, over the years, credit their marriages and broods of children to Rabii Harizy and his philosophy, which brings back the lost gold of actually adoring your spouse, on principle.

“Mind, heart, action. You have to unify and integrate what you think, what you say, and what you do.”

He points often to his temple, then heart, then side of hip, and says, “Mind, heart, action. You have to unify and integrate what you think, what you say, and what you do.”

This is the core of his teaching: Integrate and harmonize all thoughts, words, and deeds—and whatever you do, do it with purpose and integrity.

The task of leading the couple out of the foggy dance of ambiguity in the dating game he places on the men:

You have three dates to decide if you want to propose. That’s right—three.

“Everything that lasts is built on the power of three,” he explains. “So too with a lasting and successful marriage.”

Invite her on the first date, by phone, and keep the call short. If she says yes, offer three choices of restaurants, ask what she likes best. Pick her up, on time, let her know what time she will be home again, and bring her home at that time. No later than midnight. On each of the dates, you are to speak of nothing personal—only about the world, matters of interest. It goes without saying that you do not even dream of touching her.

“The only goal of these first three dates is to have fun,” Rabbi Harizy explains. “And to see if you want to continue to the next level.”

The next level amounts to three more dates, where the newly betrothed work on a project together, to see how you get along. The last three dates are intended to get “skeletons out of the closet.” Once a couple has reached this stage, they may consult with a third party mediator, and get engaged. They must marry shortly thereafter.

His message strikes me as combining something very pro-woman, even “feminist,” with elements of mystical ancient Judaism; he believes women are—wait for it—“by nature, born perfect.” That a woman is a man’s “crown.” That without a woman, a man walks around “like a piece of meat. He is nothing.”

A husband’s job is to give his wife whatever she wants. He makes her his queen, and “he becomes the king.”

It takes several visits, listening to Rabbi Harizy, watching him interact, before I get what he’s saying. And when I get it, I am stunned.

“A man needs to be a giver,” he says. He needs to give to a woman. To his wife. That is his purpose. And the woman receives, and she takes what you give her and she creates a world—a beautiful home. And from this home, you create children that are capable of anything, because they are confident.”

“A man is simple, like this table. He is only three-dimensional, whereas a woman is four-dimensional. She creates a whole person inside her, from what? From a little bit of sitz.”

And here’s his answer to why you should stay married, Josh:

“Because I chose her. So I honor my choice. I honor myself.”

“Ultimately, Moshe is a man,” says Ariesa Morales, who’s known him 20 years, and drops by often. She is an American woman of Cuban heritage, with silky dark hair down to her waist, and a military green baseball cap. Quite stunning. Not married. “Do I think wonderful men exist? Yes. But I haven’t been able to break that chain of disappointment,” she says. “I resist what he says, but then I have to admit to myself that my way hasn’t worked.”

Mr. Harizy often invokes the example of a soda in a glass, versus not in a glass. The glass (confinement, structure) is what makes all things compose and rise. Life. Lose that structure and it’s just a mess. This is what modern women unconsciously do with men, as society has brainwashed us not to pressure, bother, challenge, or upset a man. The men in turn, develop what a British girlfriend of mine once called “fetal expectations.”

“One of the things he’s trying to offer couples,” says Ms. Morales, “women mainly—he’s trying to give them community, because community is what keeps men in check. It’s just their nature. If they feel like other men are evaluating what they are doing, they step up. These days their behavior is all hidden. And only community can see it.”

“Most people, they are not here,” he says with a sigh, flipping some lafah on the stove. “They are in the video game.”

Fighting technological dominance, sexual incoherence, moral torpor, and attention deficit disorder, Rabbi Harizy has no easy task. But what he is offering is in fact, what everybody, deep down, wants: “The essence of life is the atom of the family. A trusting home. This is the foundation for everything,” he says. “We have an epidemic of broken families.”

A man comes in for takeout, around 11 pm, and says, with a faintly self-congratulatory sigh, that his wife wants a falafel. “Then you’d better get it for her,” Rabbi Harizy says, with a penetrating gaze. Moments later he hands him a paper bag. “Hurry home,” he says.

On my third visit, I realize how safe and happy I feel in here—that I may want to eat lunch here every day for the rest of my life.

When a man and a woman (not a couple) sit at his table across from him during a lesson, he encourages the very quiet young woman to speak, and encourages the man to listen. When he talks over her, Rabbi Harizy cuts him off at the knees. “Who asked you?” Then he turns back to the woman and says: “Continue. Please.”

When the man waffles, answering a question, the Rabbi barks, “Don’t schmear! Answer the question. Yes or no?”

On my third visit, I realize how safe and happy I feel in here—that I may want to eat lunch here every day for the rest of my life.

“When a woman talks, she is expressing herself in one of the deepest ways,” he says, challenging a cornerstone of misogyny.

“The most important thing for the man is for the woman to be happy in the marriage. She creates the home and everything that comes into it.” With that said, she needs her husband to go out into the world and bring her what she needs—to “bring it home. She should respect him and cater to his ego, in a healthy way, and he should build her up by giving her comfort and security. Then they will have a successful home.”

A couple who met and married late in life arrive, come in, and, while eating, tell me the story of how Rabbi Harizy joined them. Before the man approached the woman at all, he had trained with Rabbi Harizy, then brought his wife to be onto “the path.” He tells me how his attitude changed—how he was stunned to see himself become a man who thinks constantly of new ways to make his wife happy.

“If you want stock advice, you go to Warren Buffett,” he says. “If you want marriage advice, go to Moshe Harizy. This works. If you listen to him, you will have success.”

A Sephardic beauty comes in carrying a vase with bright flowers. “Welcome! You brought flowers!” Rabbi Harizy calls out. “Do you always bring flowers?”

She looks down, blushes, and says very quietly: “I have an admirer.”

When she leaves, after she’s finished her food, he calls after her: “Good luck with the admirer. Let him keep admiring!” 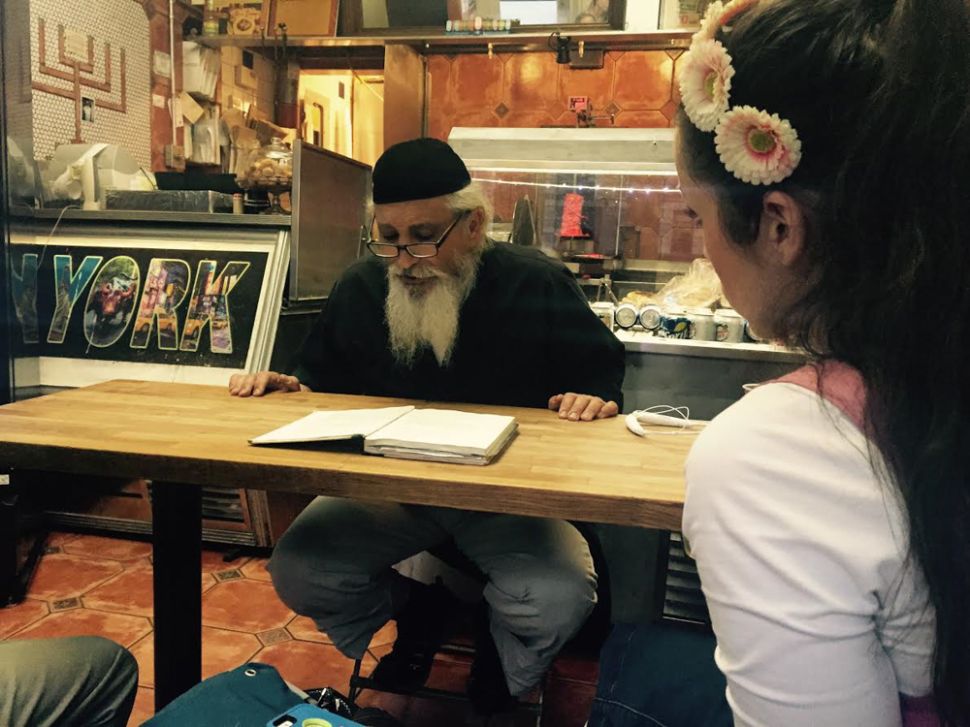