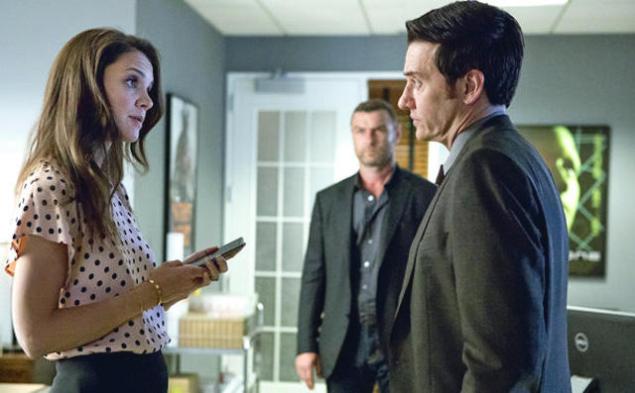 The family that fight together. (Showtime)

Dark times have befallen the Donovan clan. Their work is punishing and meaningless. Their closest confederates are distant and distracted. The parties they throw are tiny and populated mainly by prostitutes. Alternate Universe Vanna White finds her career unfulfilling. The search for Dog the dog stretches on endlessly. From whence shall redemption arrive? Hold tight and read on…

THE MAIN EVENT
It’s Ray’s first day at his new job, and we learn that the Finneys operate a lot like the Donovans: the threat of violence and mayhem looms on the horizon, but their main business is simmering grudges and professional negligence. Ray chaperones Casey Finney to work so that Casey can stomp around brainstorming horrible cereal commercials. Paige needs Ray to cajole Tina Harvey (Cheryl Ladd!), the model/co-host of a Wheel-Of-Fortune-esque game show, out of her trailer. Tommy Wheeler and Chloe, the star-crossed lovers of Season One, can’t get married without damaging Tommy’s standing at the studio. Paige is selling said studio to the Chinese, an arrangement that Malcolm Finney abruptly cancels and then abruptly un-cancels. It’s all a bit like The Muppet Show, with emotionally stunted millionaires standing in for the muppets.
Ray watches most of this happen with a look of confused disgust on his face, but he does manage to parlay a Chinese investor’s obsession with Tina Harvey into an opportunity for her to host Not Wheel Of Fortune while Not Pat Sajak has to spin the wheel. Ray also makes time to admit to Terry that he sold himself to the Finneys to secure Terry’s release from prison. He finishes his day with a quick castigation by Bridget, a lingering consideration of a box of Frosted Flakes, and the return of Dog.
THE UNDERCARD
Abby has returned to Southie, where she can take a vacation from the broken family she’s made with Ray and spend some time with the broken family she shares with her brother and sister. Abby’s father’s health is failing, her brother’s bar is losing money, and her sister resents her marriage and glitzy L.A. lifestyle. She forms a quick bond with her niece, though, and helps her dump the boyfriend who gave her gonorrhea.
Terry has returned to the Fite Club, where Mickey and Bunchy welcome him home with a deeply depressing hooker and cocaine party. One has to imagine that Mickey was able to expense said hookers and cocaine, which robs the whole affair of its intended sentimental value. After a prostitute asks indelicately about his “Frances” tattoo, Terry shuts the party down and rebuffs Mickey’s offers of support.
With Abby out of town, Conor finds himself hosting a similarly modest and dispiriting house party. It might be more fair to say that Conor is pressured into allowing two or three couples to hook up in his house while he sits in his kitchen. He tries to entertain himself by forming a spontaneous crush, but when she pairs off and heads upstairs to the bedrooms, Conor beats his rival with a baseball bat.
Bridget learns that her math teacher (Mad Men‘s own Ken Cosgrove!) has been recently widowed, and she tries to improve her odds in class by telling him about that time that her boyfriend was murdered.
“Breakfast of Champions” is the best episode of the season, perhaps only because one senses that the main action has begun: Ray has quit courting the Finneys and begun hauling their garbage, and Abby has quit hating her family life and begun acting on her frustration. Promising thematic material is beginning to surface, even if it never seems to hold the show’s attention.
Ray and Terry are the show’s two most subtly drawn characters, seldom sold out for comic relief, and Season Three is better for highlighting their relationship. Terry’s belief that Ray is “the family’s only chance” is the type of heartbreaking irony for which Ray Donovan seems to be searching. For decades, the Donovans have been trying to outrun their family’s tragedy, and Ray is held up as a success story, not because he’s managed to deal with any of it, but rather because he’s found his way into the upper class. Terry, on the other hand, is the only Donovan reckoning with his reality and aspiring to real personal dignity, but even he can’t see that he’s at least Ray’s equal.
Abby, newly surrounded by people who want to engage with her, finally shines both as a character and as a person: in Los Angeles, Ray knows the solution to everyone’s problems, but in Southie, it’s Abby who cuts through the crises. As she earns her niece’s admiration, she finds a role that she’s been unable to fill on the West Coast.
Most mysteriously, Ray seems to be caught between Paige Finney and her father, even though we have no real insight into what conflict they have with each other. Each repeatedly calls on Ray’s devotion, and neither Ray nor the audience know what choosing one or the other would mean. It seems typical of Ray Donovan that the mechanics of the plot and the dictates of character proceed on separate timelines, and it remains to be seen exactly what hay can be made of the season’s overarching storyline.
CEREAL NOTES TAKEN DOWN BY CASEY’S ASSISTANT
Spin Cycle, with its wheel-based gameplay and its battling host and spokesmodel, owes much to Wheel Of Fortune, but the wheel itself is ripped straight off the set of The Price Is Right. The eventual oral history of Spin Cycle will fly off bookstore shelves.
This commentator would never presume to know more about prostitution than an actual working escort, but it seems that small talk about the women’s names tattooed on a john’s chest would quickly and inevitably lead into tricky conversational spots.
“Trix the rabbit is suave, sophisticated!”
Speaking of which, would the Kellogg Company even accept commercial pitches from a producer at a troubled film studio? Even if said pitches didn’t revolve around Tony The Tiger’s tour in the Vietnam War?
Malcolm’s wormy assistant is Paige’s husband! The Finneys and the Donovans are truly well-matched in boneheaded dysfunction, and it’s imperative that their houses be joined by marriage. Here’s to an opulent, season-ending wedding! 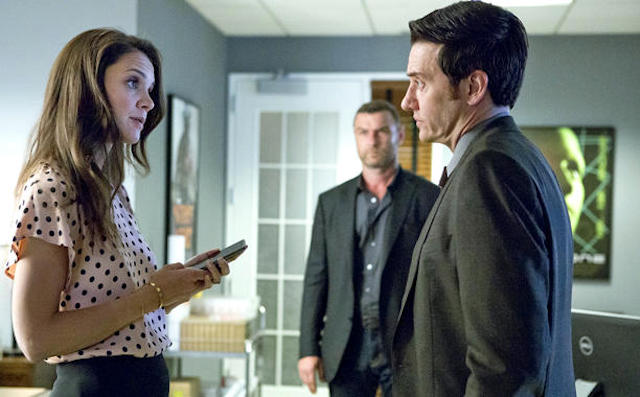