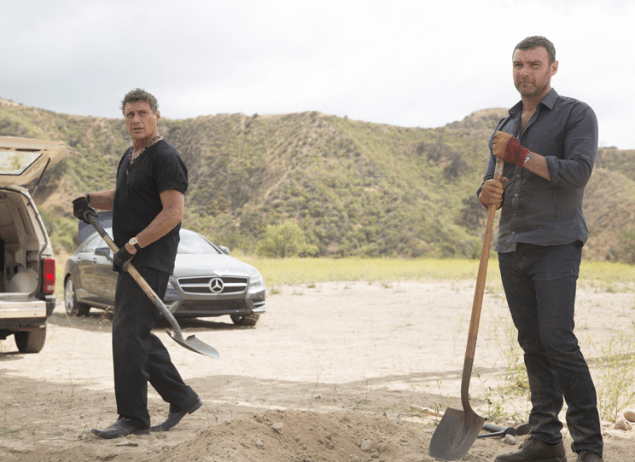 The Donovans of Ray Donovan Season Three have a secret weapon on their side: Ray Donovan Season Four. Last week, all was lost, Ray had alienated everyone on both sides of the law, and it seemed that catastrophe was inevitable. The first-class cast finally had some do-or-die stakes to match.

This week? Maybe it all wasn’t such a big deal after all. Most of the family’s problems have ironed themselves out, the rest seem like they can be handled by season’s end, and everyone can end up back where they were before Ray double-crossed California’s reigning crime boss, Terry was driven mad by stabbings and Parkinson’s Disease, Mickey declared war on the Armenian mafia, Bunchy confessed to a homicide, and the defeat of Governor Verona destroyed the Donovans’ financial hopes. Still though: will Terry continue sleeping at the gym or will he move in with Ray? Don’t touch that dial!

We open on Ray, digging a grave in the desert… and then snapping awake in Paige’s bed! The bedroom scene is thuddingly timestamped “EARLIER,” suggesting that the episode will lead Ray inevitably to the desert. We will revisit the burial scene several times throughout the episode, leaving to the viewer the questions of who or what is going into the hole and why.

Paige and Ray are still working through their Establishing A Los Angeles NFL Franchise punch list and have come to the matter of Napier, a real estate developer who is demanding ninety million dollars from the Finneys for reasons apparently too tedious to explain but that stand between Paige and her stadium. Paige is understandably reluctant to part with so much money and wants Ray to bring costs down the Ray Donovan way.

Ray cooks up an ingenious plan: to return to Helen at the Department Of Fish And Game, to borrow from the impound locker there a poisonous and therefore illegal-to-own snake, to plant aforementioned snake on Napier’s person so that Helen can arrest him, and then presumably to use his arrest as leverage to drive his price down. This plan gets as far as the snake-planting stage, before which time Helen panics, Lena counter-panics and punches Helen, and Helen, splayed on airport tarmac, is bitten by a Central American Eyelash Viper, becoming frontrunner for the role of Person Being Loaded Into The Hole In The Desert. Plan Snake having failed, Ray and Paige are hard up for a new way to compromise Napier.

Daryll’s luxury sedan is blown up in retaliation for Mickey’s attempt at defrauding the Armenian mob. The law enforcement officials investigating the explosion level with Mickey: they know who he is, what he’s doing, and whom he has pissed off, and they offer him an opportunity to slip back into the snitch jacket to inform on the Armenians. He seems generally agreeable, and immediately jumps on the opportunity to stare out windows while brooding.

Abby takes Terry to a barber to get both a haircut and the hard sell on moving into the spare room in Calabasas. Terry cleans up nicely and does splay attractively across a guest room bed.

Father Romero visits the gym to speak to Ray and also to become a dead body burned and buried in the desert. As it happens, though, he doesn’t want to turn the Donovans over to the authorities. He wants to give them his files on Father Danny’s murder and let them all part as friends who have long terrorized each other. Thus, Father Romero escapes a desert burial, but file box full of evidence does not.

Bridget continues to pursue Donellen, waiting after class to hit him up for tutoring. Donellen attempts to deflect her affections, not by refusing them and walking away, but rather by making a series of mealy-mouthed excuses about his late wife and his addiction to prescription medication. Bridget finds his address on a wayward New Yorker and confronts him on his front step. She finds him fairly well zonked on pain pills, manages to talk her way into his house and to kiss him before he halfheartedly turns her away. We leave Bridget nuzzling against him as he passes out on his couch. Donellen, the desert calls to you.

Varick Strauss, recently divorced by Paige Finney, is now being fired by her father. Heartbroken and enraged, Varick confronts Andrew both with his hope that they might openly celebrate their love and the fact that Varick knows that Andrew is a closeted criminal. Andrew insists that he’s never felt anything for Varick and brains him with a fireplace poker. Andrew calls upon Ray to dispose of the body. At first Ray refuses, but seeing an opportunity to advance the football business, he enlists Lena and Avi in the cleanup operation and demands that Andrew pay off Napier and leave Paige in charge of the franchise. Ray, Andrew, and Ari create the impression that Varick, alive, has absconded to Mexico. Andrew cleans out Paige’s trust fund, Ari flies south on Varick’s passport, and Varick’s body goes into the hole. Ray feeds Paige the cover story, but she correctly intuits that Ray and her father have conspired against her.

Puzzlingly, Ray Donovan has cashed in most of the conflict that it’s been building over the course of Season Three. Ray and Andrew are back in business together, and the football business is proceeding apace. The Armenians have decided to respond to Mickey’s insolence by vandalizing his car. Father Romero’s pursuit of the Donovans has been reduced to ash. Bunchy, against all odds, has the love and support of a tenacious luchadora. Terry, perhaps still a broken paranoiac, has found his way into a loving household and has received a free haircut. What’s left for our heroes to face this season? Will everyone start Season Four basically where they started Season Three? It seems quiet… too quiet?

“Excommunication is not a punishment. It’s an invitation to change,” says the patron saint of passive-aggression.

When Armenian Power Syndicate used to open for C + C Music Factory, half the audience would leave after their set was done.

Google Image Search confirms that Eyelash Vipers do sort of look like they have little eyelashes.

Abby, to Terry, on the Donovan Family Condition: “All you guys are so fucking glum.” 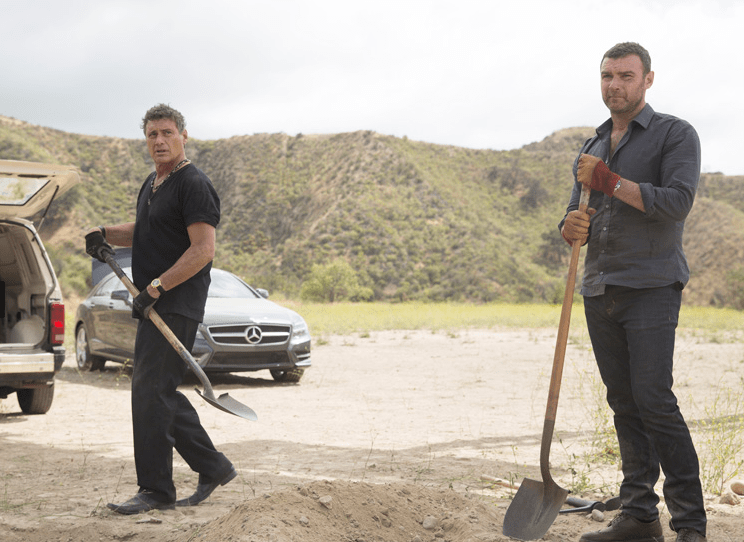