Welp, those ol’ Donovan boys have really stepped in it this time! Ain’t no way they can un-cook this goose!

For five episodes, Ray Donovan has operated as an almost pure character study– allowing our heroes to make their typical mistakes without any sense of how those mistakes would come back to bite them. Ray fell in with the nefarious Finneys but paid little price even when he’d failed them. Abby re-engaged with her family in Southie and navigated their resentments and crises with aplomb. Mickey and Daryll became pimps and suffered nothing but a few momentary cash flow problems. Terry went to prison, was shivved by white supremacists, and managed to land right back at the boxing club.

In “Swing Vote,” though, the hammers fall on everyone.

It’s election day, and though Governor Verona’s campaign is sailing towards the rocks, Andrew Finney and his crew are finalizing their deal to bring football back to Los Angeles. Somehow, Paige will have to bid head-to-head against another potential buyer (Henry Sylvester, the fracking king of North Dakota!), and it falls to Ray to prevent him from attending the negotiation. Ray and Lena intercept Sylvester at the airport, drug him, and stash him in a motel room. Paige’s bid for the team is successful, and, having confirmed that he’s been granted a three percent stake in the new franchise, Ray gives the Cell Phone Of Secret Obscene Voicemails to Paige.

The tension between Abby and Ray is quickly cooling as well. Buoyed by the fact that he’s now in the football business, Ray tells Abby that he doesn’t want a divorce. Better still, Finney has invited Ray and Abby to the governor’s election-night soiree. Ray feels like such a bigshot that he even agrees to help buy Abby’s family’s failing Boston dive bar. At long last, Ray can wash the blood from his hands and provide for his family as a clean, legal businessman.

Then Verona loses the election, the football deal collapses, Finney finds out that Ray had three points on the deal, and he immediately intuits that he’s been double-crossed for the Cell Phone Of Blackmail And One-Sided Phone Sex. In an instant, Ray has no football money or consulting business and has helped ruin California’s most powerful political kingmaker.

Father Romero, in a transparent ploy to wring more information from Bunchy about the murder of Father Danny, suggests a long, conversation-filled road trip to Bakersfield to win back Teresa’s love. Bunchy’s soaring overture (including a hasty proposal of marriage) to Teresa doesn’t quite melt her heart, but Bunchy seals the deal by insisting that he’ll wait at the Denny’s down the block until she changes her mind. She arrives several hours later, and, on the condition that Bunchy start using the name Brendan, she restarts their courtship. On the other hand, though, Bunchy reveals to Father Romero his and Ray’s complicity in Father Danny’s death, exposing both of them to the wrath of whatever shadowy power structure Romero represents.

Mrs. Minassian invites Mickey to the pistol-whipping of a deadbeat strip club owner to demonstrate the penalty for recalcitrance in the Minassian organization. Ginger’s sex work angers her landlord and will hamper little Audrey’s access to the public school system, so Mickey sets out to arrange a no-show job at the gym for her.

Terry is paranoid about Aryans exacting revenge for his jailyard pugilism. Large bald white men are visiting his boxing gym, and he finds on his desk an errant weight plate, the same implement with which he brained one of his attackers back in prison. His emotional state deteriorates quickly (starting not from a place of serene confidence), and he obtains from Potato Pie a handgun and nine Chekovian bullets. Late in the episode, consumed with dread and self-destructive rage, Terry nearly shoots Mickey in the dark, and Mickey, Terry, and Ray share a laugh about Terry almost succeeding where Ray has failed: at killing their father. Also, Bunchy apparently uses weight plates as paperweights.

Bridget volunteers at the polls in order to log some additional Ken Cosgrove time, and they commiserate once again over the loves they’ve lost. Will it be a genuine or a misperceived act of sexual impropriety that causes Ray to kill Cosgrove in the second-to-last episode of the season? Only time can tell.

Through five episodes of Season Three, it was difficult to see exactly which mistakes the Donovans were making. They were playing fast and loose with law and morality, but that’s not always a crime in the world of prestige television. Now that their schemes are beginning to crumble around them, though, it’s clear that their sin was hoping that they could be more than they are. Mickey wanted to believe that a freewheeling, avuncular grandpa can climb the criminal ladder, but his adventures in the flesh trade have put him under the thumb of a bone-breaking crime lord. Bunchy tried to live his life with his heart on his sleeve, but he’s given Father Romero the tools to destroy him. Ray thought that his noble intentions could earn him respectable living. In the Finneys, he saw the two stars by which he sails: a father figure and a damsel in distress. He reached for both, got neither, and now finds himself in trouble worse than he’s ever known before.

Trouble is a welcome addition to the story at this point. The Donovans can’t really shine as characters without it.

Finney Family “It’s Chinatown” Bombshell: Varrick Strauss, Andrew Finney’s cold, officious assistant and Paige Finney’s cold, officious husband, once shared a romance of some kind with Andrew Finney, which romance produced at least one blackmail-eligible handwritten breakup letter. Paige reveals this fact to Ray with a tossed-off shrug, as if to say, “My dad dated my husband. Don’t you hate it when that happens?” Ray’s response: “That can’t be easy.” Your response and mine: “Please sit in this chair, Paige, while I ask you twenty-five follow-up questions.” Is this a sublayer of Finney family strife that Ray has yet to burrow down into? Is it just a little only-in-Los-Angeles flourish?

“So, anyway, when I finally met my abuser after all those years, I killed him in fairly gruesome fashion. You ever have anything like that happen to you halfway through Season One? Here, speak into the saltshaker.”

Green Crack is apparently a hybrid strain that brings about an invigorating and long-lasting head high, but even the hippest brand manager would admit that the name is out of step with weed’s current march into the mainstream.

Teresa has a point in saying that “Bunchy” is a puppy’s name, but she also must know by now that Bunchy is a guy well-served by a puppy’s name. He had, after all, just waited outside her gym for hours in hopes that she would show him some affection.

Lena’s Scene Of The Week: Lena tells a stranger that her name is Debbie Harry and then jabs a hypodermic needle into his thigh.

Remember when Ray’s and Mickey’s mutual estrangement was the animating conflict of the show? Remember when they reconciled so completely that now they can share a rueful laugh about Ray’s attempted patricide? The viewers remember one of those two things. 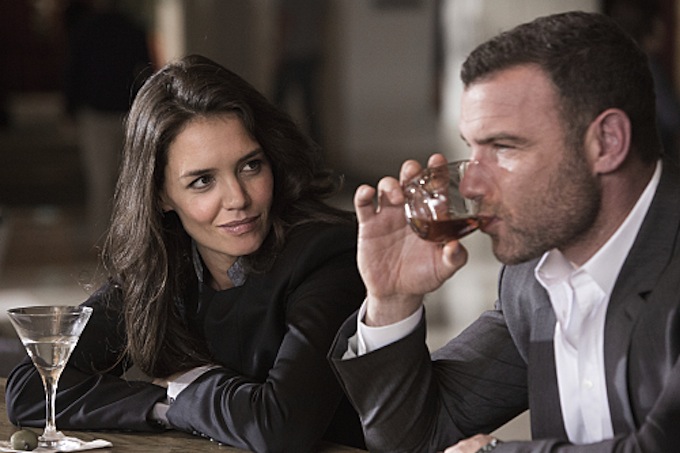