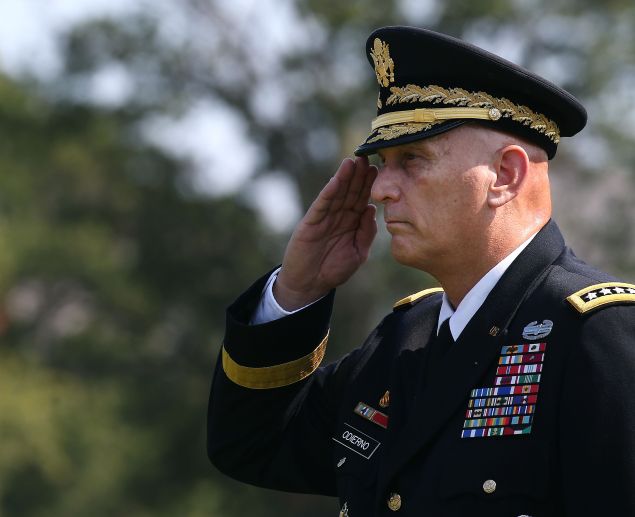 General Ray Odierno, the Army’s Chief-of-Staff retired last Friday after 39 years of distinguished service. In his farewell remarks, he said something that was both distressing and refreshingly candid: the U.S. Army is at an inflection point. If troop levels continue to be cut as they are scheduled to, the Army won’t be able to do the jobs expected of it. Not in some hypothetical, war-game contingency, but where it is assigned today. Sequestration, that short-sighted, budget-cutting meat-axe is about to do serious damage to American interests and risk American lives.

Despite the wishful thinking in the White House and on some parts of the campaign trail, the world is becoming a more dangerous place. As General Odierno testified before Congress earlier this year, “I’m not seeing, in ’16, peace breaking out all over the world.”

The West Point graduate, cited not just “ISIL extremists” and a “chaotic Middle East,” but an “aggressive China,” an “unstable North Korea” and a need to continue missions in Afghanistan and Iraq as demands on America’s military. He said, however, that his greatest concern was Russia, in part because of the “maturity of its military capabilities” and because “it has some strategic goals that concern me.”

We cannot allow Americans to be sent into harms way with inadequate troop levels, support, or training.

Odierno’s talents were not limited to his imposing physical presence: at 6-foot-6, he played both football and baseball at the Military Academy. Some keen observers of the military credit him as a full co-author of the successful surge strategy in Iraq. Tom Ricks, author of “Fiasco: The American Military Adventure in Iraq” called Odierno “the dissenter who changed the war.” In a 2009 Washington Post article, Ricks said, “if David Petraeus was the public face of the troop buildup, he was only its adoptive parent. It was Odierno who was the surge’s true father.”

That willingness to go against conventional wisdom and the political orthodoxy is unusual in most organizations and rare in the upper reaches of the military. But it was particularly noticeable when Odierno did it: he had spent 55 months in Iraq on three combat tours – longer than any other general officer – and was respected for his competence in conventional warfare. Thus, when he helped devise and advocate for a the change-in-strategy counter-insurgency surge, policymakers paid attention.

They need to pay attention again.

Odierno said “The Army has less than half the combat-ready brigades it should have, is badly in need of modernizing and resetting its equipment after more than a decade of sustained combat, and is cutting personnel to a dangerous level.” While he agrees with Congress’ concern over the national debt, he said that “the military must have the capability for the United States to remain a global leader, I worry that in years to come, we won’t have that capability.”

In an exclusive interview with the Observer, retired Vice Admiral Peter Daly, CEO of the United States Naval Institute, helped put Odierno’s comments into perspective. “Because Congress wasn’t willing to address entitlements or taxes, the two greatest drivers of the national debt, it focused on discretionary spending and dictated that defense spending would absorb 50% of all cuts. Instead of minor adjustments to entitlements and taxes starting 10 years out, Congress placed a dangerous burden on road maintenance, bridge safety, and defense today.”

“It is important to remember that before sequestration, defense spending was reduced by $700 billion over 10 years and called “efficiencies.” Sequestration took another $500 billion on top of that,” explained Daly. “The Army is not alone; all the armed services are seriously impacted.”

When asked how he would allocate additional funds should they become available, Odierno said he would spend first on readiness and second on modernization. Only after those two shortfalls had been remedied would he try to reverse the reduction in “end-strength” – the size of the Army. Undoubtedly, Odierno’s concern for the troops was influenced by his family’s experience over the past few years. His son tony, a 2001 West Point graduate, lost his left arm when a grenade was fired at his vehicle near the Baghdad airport.

Just in the last week, we’ve heard about ISIS probably using chemical weapons against the Kurds, kidnapping and sexual slavery. Clearly the limited air sorties the President has authorized have not been enough, and the prospect of some American ground involvement in the region looms. We cannot allow Americans to be sent into harms way with inadequate troop levels, support, or training. 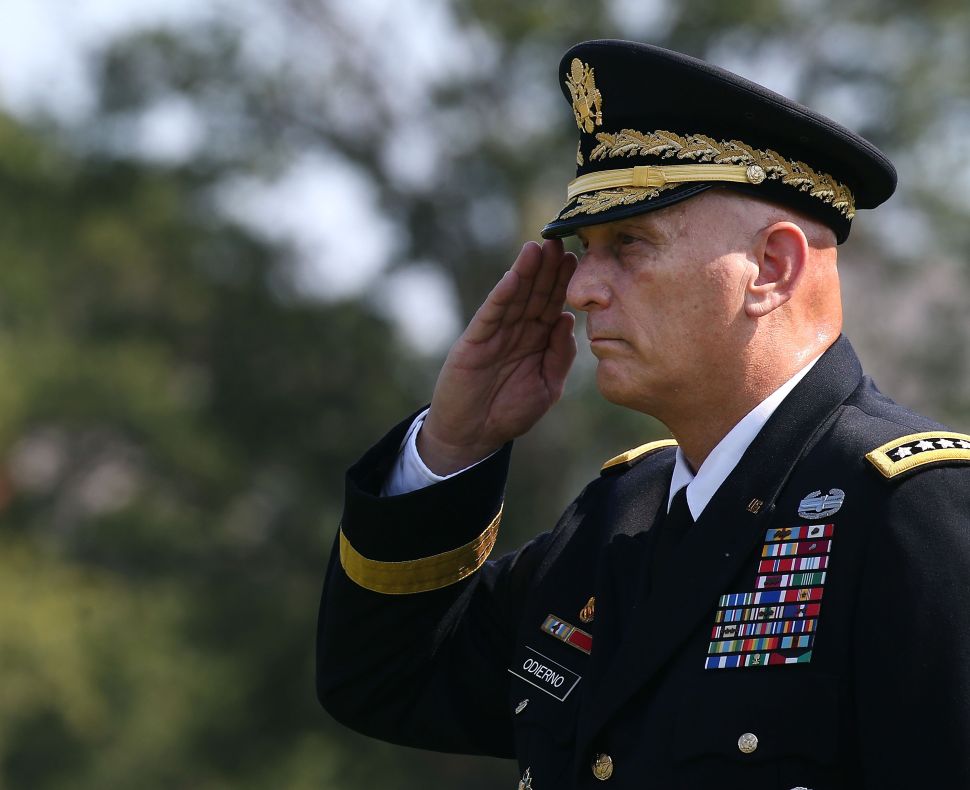