Sasheer Zamata is down to discuss race. Or, to be clear: she’s handling my attempts to talk about her odd audition for SNL last year with bemused grace. After our interview, she takes the stage at Park Slope’s Union Hall–where the Saturday Night Live featured player hosts a regular comedy show “Sasheer Zamata Party Time!“–she’s more open still; tackling her personal experiences with both subtle and unsubtle racism and the unintentional Voldermortian power we give a certain racial slur when we try to erase it from the cultural lexicon. (Do I need to tell you what the word is?) Her solution? Maybe we should just grant certain celebrities the ability to use the term. Say for instance: a certain pop star. She gets a pass.

“But you know people would just call her ‘brave,'” she concludes after trying out a politically incorrect chorus of “Bad Blood” with an arched eyebrow of someone whose fame has come at the cost of being known best for her Michelle Obama, Rihanna and Beyonce impressions on SNL. Many argued that her mid-season hiring—amidst a PR crisis response by producer Lorne Michaels to cope with mounting public pushback on the show’s lack of diversity last year—amounted to tokenism: the audition was limited to black women. But Ms. Zamata credited the experience with emboldening her to discuss bias. “I’m way more vocal about criticisms I have, and I’m much more biting in my commentary.”

Ms. Zamata is currently touring the country doing standup, but you can catch her in Greenpoint at the Iron Lady next Tuesday at 9 pm. Her next Party Time!! show will be September 2nd at Union Hall.

When did you realize you were good at improv? I wasn’t picked for the improv group in college, not because I wasn’t good, but because I was told I didn’t fit the group, didn’t gel with their dynamic. My friend, the funniest person I know, auditioned three times. Finally, I was like, “Why don’t we just start a group together?” That’s been a theme of my life: get rejected, start my own thing, get more success for that than I would have for the other thing.

I’m sure that’s both a comfort and just completely hurtful to hear. “It’s not personal, it’s not about you.” You can do the best you could possibly do, and it would still have nothing to do with you. When I didn’t make the improv team, I guess I didn’t take it personally.

When word leaked about SNL’s casting call  for black women, people were of two minds. One being: quotas aren’t great. And the second group: “Well, this show is getting more diverse, which is positive.” I knew how big of a deal it was going to be. Being in the show is a big deal. I’m glad that I was able to be here at a time people wanted change to happen. And SNL is interesting, because people feel ownership of it. Not many shows do you have people demanding, “We deserve a black woman!” And SNL heard them.

Do you thank Kenan Thompson every day for speaking out about the SNL’s lack of female diversity? Yeah! Finally people were like, “Oh yeah, I guess there hasn’t been a black woman in the cast for a while.”

I’m glad it happened. I wish I had auditioned like everyone else. It was surreal. When we were auditioning, they do it like every other audition, I assume. As far as getting our own dressing rooms, but then for the screen test we were in the same area. It was nice, I have to say. Most of us haven’t met, but when we were in the same room, it was like, “Wow, we’re all GREAT! What a great thing, that we’re all this upper echelon of performers!”

I’d never seen some of these women perform, they hadn’t seen me, but it’s nice to know that someone else is out there, working hard the way you’re working hard. It was a weird thing to be brought together in those circumstances, but it was great to see other people like myself, who should just keep doing their thing.

Has the SNL experience made you more political about race and gender issues? I’m paying attention to it more; have more formed thoughts to express. Whereas maybe before I would be mad, but maybe didn’t know how to express it. But now I have a better idea of how I want to say things, how I want to convey ideas to the audience.

How did you end up in New York? A lot of UVA friends who moved up here after college. One of the first times I visited, I auditioned for a show at La MaMa. I got a callback, and had auditioned for internships—HipHop Theater Festival and Urban Stages, both unpaid.

Oof, I did Central Park SummerStage unpaid. But I had to work at Starbucks in Grand Central. Never again. I worked [at Starbucks] at Jessup, [Md.] Good people-watching. Like anyone who does a really specific drink—“I need it at 120 degrees, syrup at the bottom.” People would flip if you got something wrong. But I realized this is their one thing to control the whole day. They get shit on at work, at home, and the just need this one thing made exactly the way they want.

But when I didn’t get the La Mama show and got the internships, it prompted me to move here. “New York is ready for me!”

You worked at Disney World as Buzz Lightyear, so: Between the Magic Kingdom and the UCB Comedy scene, which is more of a cult? They’re both so intense. UCB has been compared to a cult and a pyramid scheme, and it’s all that stuff. And Disney also has militaristic aspects. In both, it’s the people the groups attract, and especially at Disney, you’d find people who just wanted to make children smile or believed in magic.

That’s really creepy. I worked with a war vet. He told me once that he just wanted to be in a place that’s happy and not have to think of the stressors of the world.

You’ve said you’d love to be in action movies. Comedians aren’t really known for being tough. You don’t see Bill Hader trying to join a Fast and Furious cast. I just love movies where they blow stuff up, in your face, and it’s so excited and cool. Like, I would love to play a superhero. I would love to be a villain. I would love to do something that’s badass. 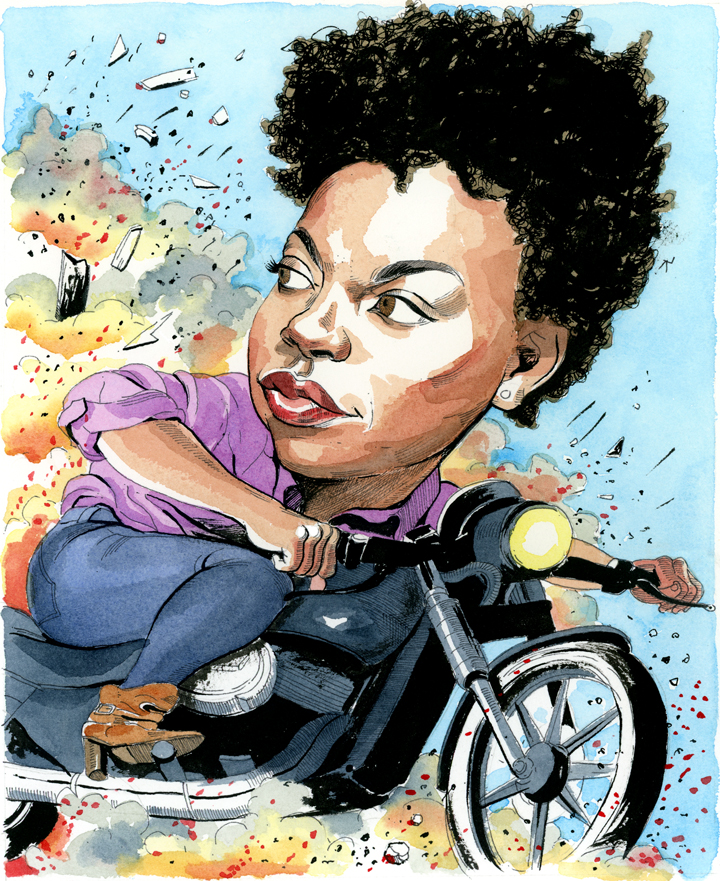