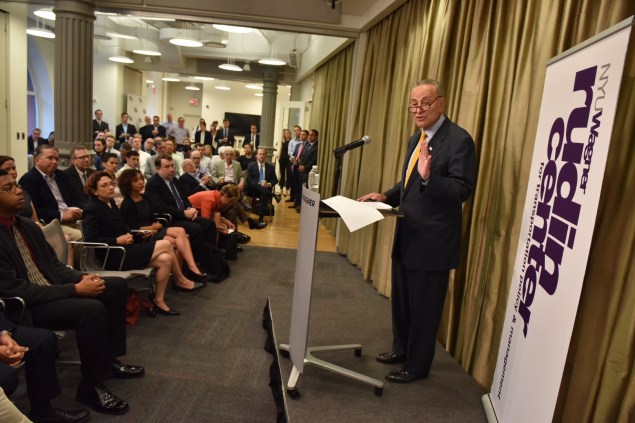 New York Gov. Andrew Cuomo says it’s not his tunnel. New Jersey Gov. Chris Christie canceled the first attempt to get extra rail capacity built in 2010. The federal government has offered up a loan, but each governor says that’s not enough.

So, what’s to be done about the need to build two new train tunnels under the Hudson before the existing tubes fail? Enter: Sen. Charles Schumer.

“The bottom line is, we can’t have everyone sit here and say ‘you go first,'” Mr. Schumer, a Democrat, said today following a speech on the subject at New York University.

Cooperation is necessary, he said—and to that end he proposed a new partnership, dubbed the Gateway Development Corporation, which would bring together the key players in the project: New York, New Jersey, the Port Authority, the MTA, Amtrak, and the federal government.

“Without a single agency directing traffic, Gateway could only move forward one inch at a time, grant-by-grant, undertaken by the separate agencies in a piecemeal fashion. That makes a project such as this, with so many moving parts—and a rigid chronology of construction—extraordinarily difficult,” Mr. Schumer said in his remarks. “Input should come from all parties—everyone should have a seat at the table—but the planning and financing and implementation of Gateway should be driven by one conductor: the development corporation.”

In addition to making it easier to direct the program, Mr. Schumer also argued a development corporation would make it easier to pay for it, by allowing various agencies to tap into funding other agencies involved can’t touch.

“Amtrak can’t access federal mass transit funding. The Port Authority and regional Transit Agencies can’t access federal railroad dollars the way Amtrak can,” Mr. Schumer said. “We’ll only get Gateway done by adding up several pieces of financing, with an eye toward getting the maximum amount possible from the federal government.”

Funding for the project, expected to cost up to $25 billion, has been the biggest hang-up for getting it done. Mr. Christie, a Republican, axed a prior attempt to add cross-Hudson capacity, known as the Access to the Region’s Core project, or the ARC tunnel, because he said New Jersey was being stuck with too much of the bill—even though that tunnel was aimed more at serving NJ Transit than Amtrak—compared to New York or the federal government. (Others have noted the tunnels are more critical to New Jersey, as more people commute from the Garden State into New York than those going in the opposite direction.)

Mr. Cuomo has said he understands Mr. Christie’s concerns—and says the federal government needs to put up more than just loans, as the tunnels are a vital part of Amtrak’s Northeast Corridor serving people from Washington to Boston. U.S. Transportation Secretary Anthony Foxx, meanwhile, has called the lack of action from the states “almost criminal.” Recent problems in the tunnels have led to misery for NJ Transit commuters and Amtrak riders alike.

Of course, Mr. Schumer had his ideas on how to pay for the project—and, like the governors, he is looking at the feds to provide most of the cash, in part by using profits from Amtrak’s lucrative Northeast Corridor, which presently is used to prop up far-flung Amtrak routes that don’t generate a profit.

“There is a bipartisan move in Congress to allow Amtrak to cordon-off the profits it makes on the Northeast Corridor, and use it for capital investment on that corridor. It keeps the money in the Northeast and reinvests it,” Mr. Schumer said.

In addition, he proposed funding boosts for the federal “New Starts” program, which has been tapped for the Second Avenue Subway and East Side Access projects and allows mass transit agencies to apply for federal grant money—something Amtrak could not do, but the MTA or NJ Transit could. He also called, yet again, for a heftier transportation bill that would include capital funding for Amtrak—pushing a bi-partisan proposal to get an influx of cash for transportation by forcing U.S. companies with cash overseas to return it to the United States at a lower than normal tax rate. 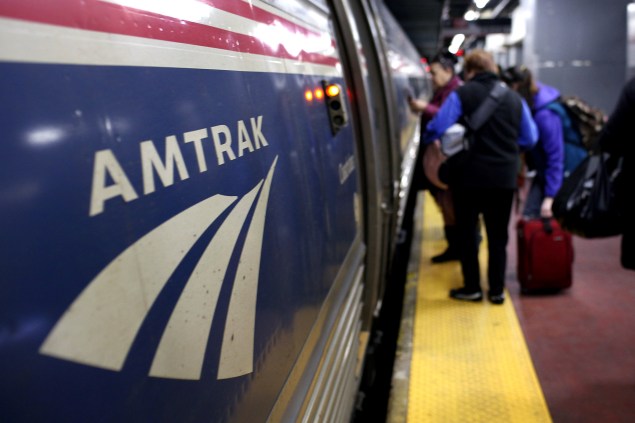 And then, if more cash is still needed, the project should take out a loan through the Railroad Rehabilitation and Improvement Financing Program, he said—which might be a tough sell to the two governors who surely don’t want to be on the hook for paying it back.

Mr. Cuomo has so far refused to even meet with Mr. Foxx, saying he doesn’t see the point if all that’s on the table are loans. Mr. Christie recently agreed to a meeting but has also made it clear he won’t accept a deal unless he believes the federal government is paying its fair share (something he promised he’d do if he were president). Both men have not exactly been enthusiastic about the chances of the tunnel happening any time soon, despite dire warnings that one or both tunnels could fail.

“They’re in a show me mode, show me what the federal government can do,” Mr. Schumer told the Observer when asked about the governors’ tones. “And what I’ve tried to do here is show them a little bit, but in a very friendly way.”

The closure of even one would be a nightmare for commuters and Amtrak travelers, as trains going in both directions would be forced to share a single tunnel. The tubes are more than 100 years old, and their condition became even more dire after they were flooded with salt water during Hurricane Sandy.

Mr. Schumer said he believed the governor understood the “urgency” of the issue.

“I’ve talked to him as recently as last night and I tink he’ll be a great partner in this,” he said. “Obviously, if I was New York’s governor and even as New York’s senator, I’d want to leverage as many federal dollars as we can because it’s a national problem.”

The senator didn’t refrain from taking some swipes at Mr. Christie for his cancellation of the first tunnel in 2009—again calling it a “massive mistake”—but he also would not say whether New Jersey ought to be on the hook for more of the cost than New York,

“I think Gov. Christie has a special responsibility. Part of that will not be the funding part, but getting his fellow Republicans to get along,” he said. “But I’m not going to get into who should put in what right now. That would be premature and probably counter-productive. First, let’s get the development corporation set up, which can be done as I said really quickly.”

In a statement, Christie spokeswoman Nicole Sizemore did not address the creation of a development corporation or any of Mr. Schumer’s funding ideas—but did defend the decision to cancel ARC, which Mr. Christie’s office has argued would not have solved the problem of the decrepit Amtrak tubes. (Others would note that if the ARC tunnel had been build, NJ Transit would be using it, freeing up capacity in the Amtrak tunnels—and making it easier to close them one at a time for repairs.)

“It’s easy for Senator Schumer to make these claims when New York wasn’t contributing a dime to the ARC project and didn’t step up to take on any of the cost of the project’s overruns. As Amtrak reiterated in testimony yesterday, the ARC and Gateway plans are two entirely different projects,” Ms. Sizemore said. “The completion of ARC would have done nothing to resolve the issues we’re still facing with Amtrak’s tunnels today.  Nonetheless, the Governor has repeatedly made clear that the federal government and the state of New York must be equally committed to a fair funding solution for any project to move forward.”

Ms. Sizemore said the governor’s office had nothing else to add on the proposal.

Mr. Cuomo, in a statement, had little to say about the details of the senator’s plan: “I commend Sen. Schumer for making these tunnels a national priority. We both agree that they will require significant federal investment and I look forward to working with him to move this critical project forward.” 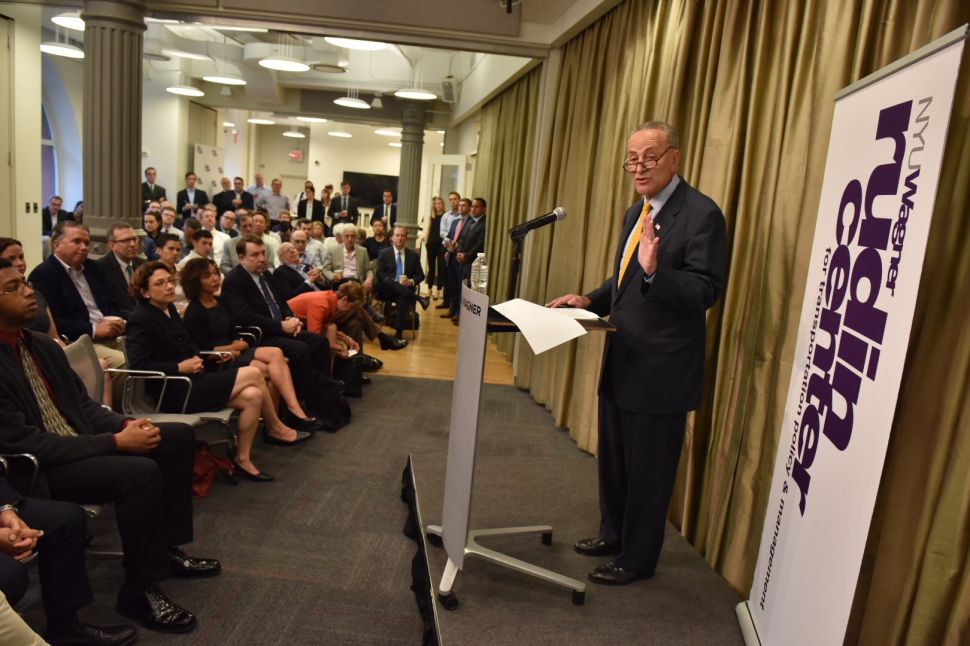