Senator Charles Schumer may intend to be the next Democratic leader of the Senate, but he said today he wouldn’t be able to force the party to line up behind him in opposition to President Barack Obama’s proposed nuclear deal with Iran.

Mr. Schumer once again outlined his opposition to the deal—announced Thursday night with a lengthy statement posted to the website Medium—while speaking to reporters following a speech on the need for new cross-Hudson train tunnels at New York University.

The senator, who is a strong supporter of Israel and was heavily lobbied on both sides of the debate, said the decision to go against the Democratic president’s deal was one of “conscience.” He has argued that, despite hopes of modernization, the odds are “too high” the regime ruling Iran will continue to sponsor terrorism and so the agreement “is too flawed and too dangerous for us.”

And Mr. Schumer said he did not believe opposing a major proposal from a Democratic president would harm his chances of leading his party in the Senate after the retirement of current Minority Leader Harry Reid.

“They respect my vote of conscience and I’ll respect theirs, whichever way they come out,” Mr. Schumer said of his colleagues.

(Some have argued that Mr. Schumer has only opposed the deal now because it is safe to do so, with enough Democratic support was lined up to pass the deal without his vote—a political maneuver that doesn’t endanger the deal but still allows him to earn plaudits from those who urged him to oppose it.)

The senator has offered a three-pronged opposition to the deal—saying he thought the deal should allow the United States to perform nuclear inspections any time, without delay and without agreement of other nations; that Iran should not be declared a threshold nuclear state after 10 years; and that lifting the sanctions will provide Iran with money he believes will be used to “cause trouble” in the Middle East and fund groups like Syrian President Bashar al-Assad’s government.

“The alternative is not war. I’d be very much opposed to war,” Mr. Schumer said today. “It is to go back to the bargaining table and come to a better agreement.”

But Secretary of State John Kerry has argued there is no better agreement—and that Iran won’t come back to the table. He’s also said that the agreement would go forward with or without the United States, with other nations and the United Nations approving it.

But Mr. Schumer argued that the parties could be forced back to the negotiating table with the threat of continued U.S. sanctions against Iran, and secondary sanctions that target third-country actors doing business with Iran (thus giving those countries an interest in negotiating).

“There’s no good solution here. It’s an agreement that is not close to the ideal or no agreement. And I believe we have a better option with no agreement—because I think we can, if we work hard at it… get the allies back to the table,” Mr. Schumer said.

The senator announced his intention to oppose the deal in the middle of a highly watched Republican presidential debate last Thursday—which led some to accuse him of trying to bury the news. Mr. Schumer said today that wasn’t the case.

“Those folks don’t know the facts,” he told the Observer, saying he had planned to publish his opposition at 3 p.n. on Friday in a “leading newspaper,” but was beaten to the punch. “I had told the president the day before, and I don’t think he leaked it, but maybe somebody in the White House did, maybe somebody else did. I’m not pointing fingers.”

Democrats from New York—who represent many Jewish constituents that have been opposed to the deal with Iran—have been split on the measure. Senator Kirsten Gillibran is supporting the deal. 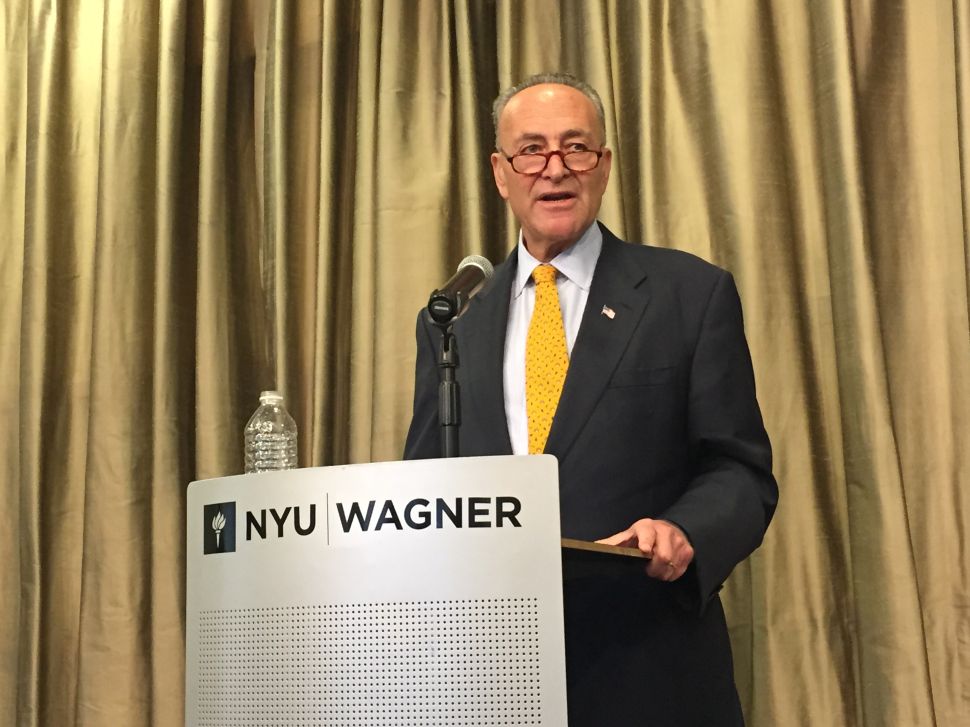