Remember? It’s just one of his famous paintings: “I DON’T CARE! I’D RATHER SINK — THAN CALL BRAD FOR HELP!” reads a thought bubble over the head of a teary blue-haired brunette straight out of a romance comic book. Drowning Girl (1963), now in the collection of the Museum of Modern Art, is trademark Roy Lichtenstein.

The world remembers the Upper West Sider, who died in 1997, chiefly for his revolutionary art based on comic book and advertising imagery and his role as one of the key originators of the Pop art.

But this summer and fall, a small but intriguing exhibit on the East End aims to present a different Lichtenstein than the public is familiar with by focusing on the artist’s unexplored, lesser-known vistas. Like some 19th century master, here he turns to subjects of nature: lakes, sunrises and sunsets, boating scenes, and even lily ponds, in an homage to Claude Monet’s “ Lilies” series.

In a two-month engagement beginning this Saturday, August 8, Guild Hall in East Hampton will present “Roy Lichtenstein: Between Sea and Sky,” an exploration of the artist’s rarely seen works in the historic genre of landscape. In collaboration with the Roy Lichtenstein Foundation, the exhibition in the Long Island beachside resort community, where the artist had a Southampton home with his wife Dorothy for decades, will display about three dozen works spanning three decades from 1964 to 1992.

“I hope that this exhibit reinvigorates people looking at his work and looking at the different techniques and different media that he used to represent various subjects,” said Christina Strassfield, museum director and chief curator of Guild Hall, to the Observer.

Lichtenstein built a reputation as the leading man of Mr. Castelli, renowned for popularizing the Ben-Day dots and peer only to the likes of Jasper Johns, Robert Rauschenberg, Andy Warhol and Claes Oldenburg. Yet, his commercial reputation precedes a far richer individual who was a model of reinvention, known for constantly challenging himself and recreating the same subject, altering it in some unusual and different way.

In 1964, Lichtenstein began to experiment with land and seascapes inspired by the images on picture postcards. It was a theme he would revisit throughout his career, helping to revive a dormant genre of painting by adding his unique touch of contemporary innovation.

“There is a lot more of Roy that people don’t know because the public likes to focus on his work as a Pop artist in the 1950s, but he continued to make art until 1997,” said Dr. Jack Cowart, executive director of the Roy Lichtenstein Foundation.

The show at Guild Hall marks the first time that the public will see an exhibition devoted solely to Lichtenstein’s seascapes and landscapes. It also happens to be one of the very final shows in which the Roy Lichtenstein Foundation will take an active role in facilitating a museum exhibition, according to Mr. Cowart. For the past 15 years, since it was founded in 1999, the Foundation has made organizing exhibitions around the world a priority, but recently the board of directors has decided to shift attention to scholarly research to concentrate more fully on the archiving and consolidating of it’s catalogue raisonné, a chronological, illustrated listing of all known artwork by Lichtenstein.

“Instead of continuing to partner with museums on exhibitions, we will be waiting for scholars and museums to come to us with brilliant ideas for future shows,” said Mr. Cowart. “There is plenty of work left to be discovered, interpreted, thought about, repositioned and put in the context of contemporary art and other artists.”

During the 30-year period showcased in this of exhibition, Lichtenstein challenged himself by using a diverse range of mixed media, including plastic, metal, painted forms, prints and film, to tinker with ways to make permanent the ephemeral, fleeting effects of sky, light, , and landscape. (In the Guild Hall exhibit, the public will also get to see for the first time Lichtenstein’s passing examination of the medium of film.)

Said Mr. Cowart: “It is always interesting for us at the Foundation to see what Roy Lichtenstein can do with a cliché. This exhibit is a voyage of discovery.” 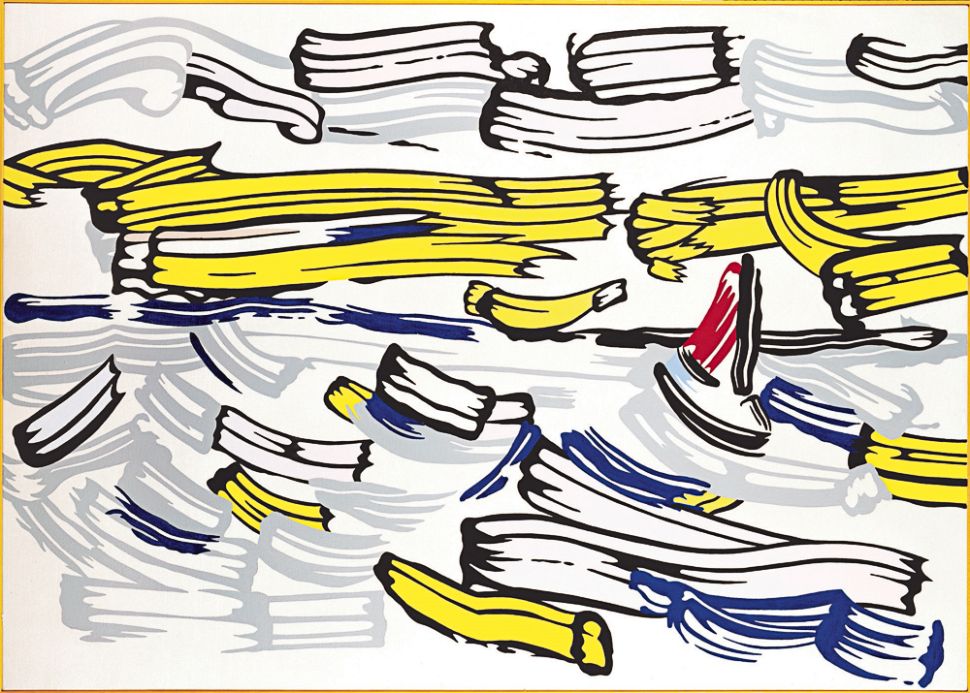