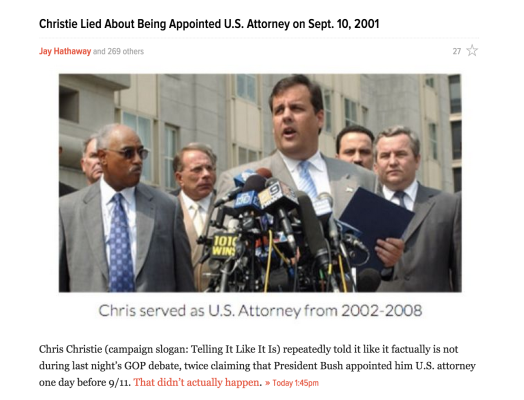 This story on Gawker, still up and uncorrected more than 6 hours after being posted, says Christie ‘lied’ about the timing of his appointment as US Attorney. (screencap)

One of the most compelling moments of last night’s Republican presidential debate occurred when Chris Christie and Rand Paul tangled over security vs. civil liberties. Gov. Christie more than held his own in the dustup and one rhetorical flourish that worked for him was to say, “I was appointed U.S. attorney by President Bush on September 10th, 2001, and the world changed enormously the next day, and that happened in my state.” It gave the governor credibility in the space and he reminded viewers that he was “the only person on this stage … who has prosecuted and investigated and jailed terrorists in this country after September 11th.”

The exchange was generally scored a win for Christie. But today, a barrage of websites attacked Christie’s narrative, their headlines telling a different story. Claiming that he adopted the “appointed on Sept 10” to enhance his moral authority, ThinkProgress demanded “Why Did Chris Christie Say He Was Appointed U.S. Attorney The Day Before 9/11?” Gawker was characteristically blunt: “Christie Lied About Being Appointed U.S. Attorney on Sept. 10, 2001.” And civil liberties site EmptyWheel.net screamed “Christie Lied about 9/11 to Try to Shut Down Paul’s Opposition to Dragnet Spying.”

Except for one thing. Christie really was first asked by President Bush to become US Attorney on September 10, 2001.

“President Bush nominated former Morris County freeholder Christopher Christie as the state’s next U.S. attorney yesterday, but the candidate’s lack of criminal-law credentials generated a new round of opposition from New Jersey lawyers.”

Obviously, for an appointment that requires the advice and consent of the US Senate, a nominee does not assume the position on the day he’s first nominated. But this is clearly what Christie meant when he said “appointed,” both in fact and in context.

Gawker wrote that “Christie was rumored for the appointment in early September, pre-9/11, but wasn’t officially nominated for the post until December of that year, and wasn’t confirmed until January 2002.”

But that’s wrong, too. This wasn’t a “rumor.” Right here on PolitickerNJ, we reported on October 2, 2001, “There was some good news last week for former Morris County Freeholder CHRISTOPHER CHRISTIE, after the two Democrats representing New Jersey in the U.S. Senate said that they would not block his appointment as the United States Attorney.” If the Senators were already agreeing not to oppose, then the nomination was clearly more formal than just a rumor.

ThinkProgress has updated its story with a confusing clarification that blames the “erroneous version of the timeline offered by NBC News’ Andrea Mitchell during post-debate coverage” but oddly has declined to correct the thrust of the story, which is that Christie self-servingly misportrayed the timing of events.

There was a time in American politics when it was a big deal for a news outlet to accuse a candidate of “lying.” They’d bend over backward to use euphemisms like ‘So-and-so had trouble recalling…'” Now, headlines accuse candidates of “lying” even when they’re telling the truth.

This website has been very tough on Chris Christie. We’d argue fair-but-tough and surely his team would say unfair-but-tough. If Christie had actually lied about this, we’d be all over him. But this is the difference between news outlets that cover these events all day every day for years and ones that chime in only when they smell something that will embarrass a candidate whose politics they don’t favor or who had an altercation with their preferred candidate.

This is always a problem in presidential elections. The national media parachutes in and tries to do quickie research. Some address that gap by seeking out local reporters to fill in the blanks. Matt Arco, who got his start in journalism at this site and now works for the Star-Ledger, appeared on Bill O’Reilly’s pre-debate program and very ably provided local color that helped national viewers understand Chris Christie better. And during the height of Bridgegate, guys like Brian Murphy, another PolitickerNJ alum, became a regular on MSNBC and broke lots of news there. For sites that have covered Christie for 15 years, recalling the facts is easier and context can be provided.

But the thing about this particular knock on Christie is that it doesn’t even make sense. The premise here is that Christie is trying to artificially bolster his authority on terror by attaching himself to September 11. But if that were true, It would be way better for Christie to start a narrative that Bush called him AFTER the attacks of September 11. If Christie were going to lie about the date, he’d have told a red-meat Republican audience, “In our country’s darkest hour, President Bush turned to me to become the top Justice official of a state that was horribly wounded by the attacks and housed many of the terrorists who perpetrated it.”

By simply telling the truth of the matter, that Bush had picked him before the attacks when terror wasn’t on the minds of any of our leaders as much as it should have been, Christie is showing that Bush picked him for reasons other than prosecuting terrorists.

In fact, one of the interesting things about Christie’s campaign is how much it mentions terrorism. It’s a good point of distinction between himself and the other candidates, as the exchange with Rand Paul proved. But in two runs for governor, it went virtually unmentioned as Christie relied far more heavily on his record of prosecuting corrupt public officials. Now, his terrorism record, which includes several successful prosecutions including the Fort Dix plotters but would not have been considered nearly as prominent as his corruption work or even white-collar prosecutions, is taking center stage, to the point where even the PAC supporting him is on the air with a terror message.

It will be interesting to see if these sites, which have had their stories up for hours, will retract them and issue corrections. According to Christie spokesman Kevin Roberts, “Some are updating, others have been more…intransigent in the narrative. Probably not going to win over thinkprogress, even with facts, though.”

That’s a shame. But, in the words of just about every candidate since the game became popular in the 1950’s, politics ain’t tiddlywinks. 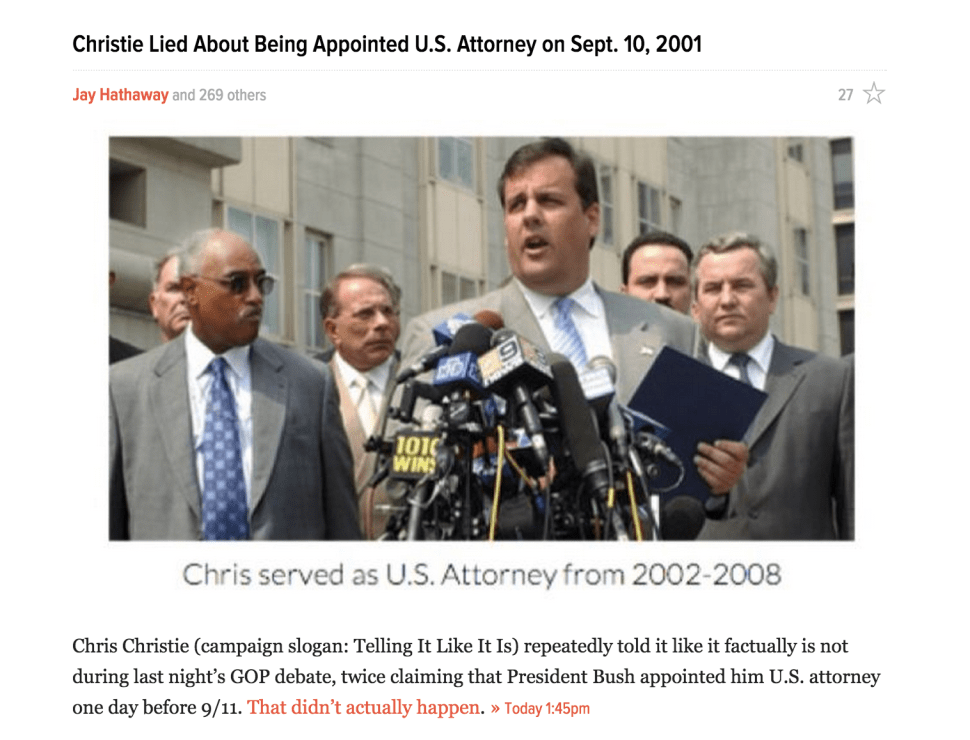