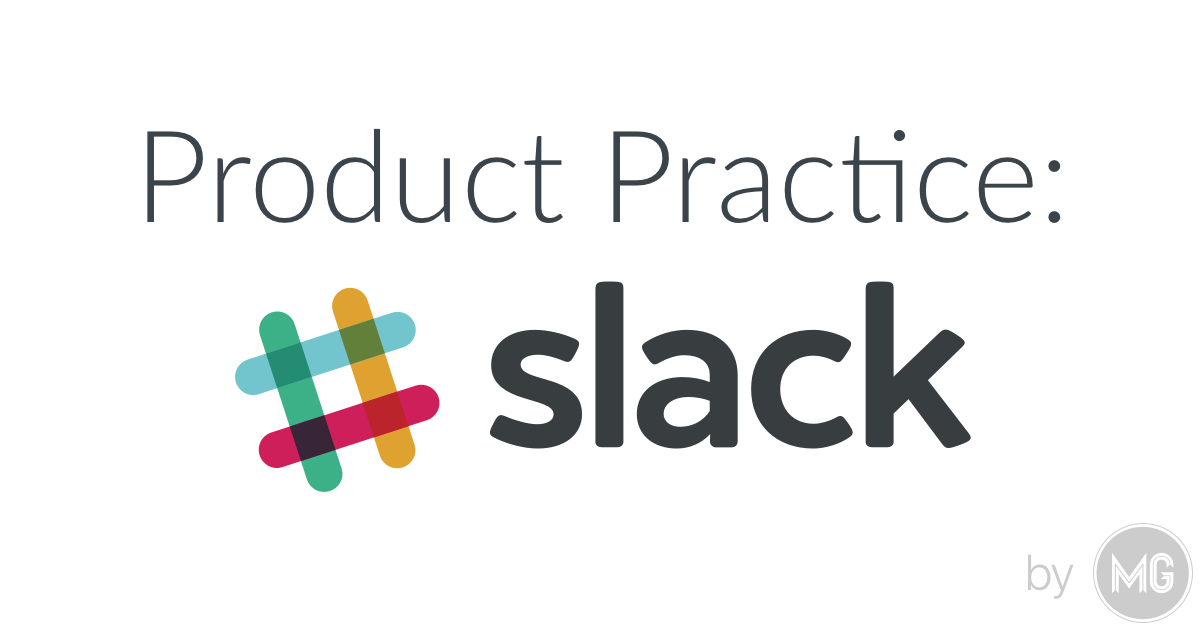 Matt Galligan is a product design & strategy consultant that previously co-founded three startups: Circa, SimpleGeo, and Socialthing. This is the first in a series on ideas or problem areas Matt has found in products that he loves, and how he would seek to address them. It’s called Product Practice because that’s just what product design is: a practice, defined as “repeated exercise in or performance of an activity or skill so as to acquire or maintain proficiency in it.” This article originally appeared on Medium.

Unless you’ve been living under a rock for the last year you’ve probably heard of the rocket ship of a company called Slack. They’ve been hailed as the savior of communication within companies and often the destroyer of email. Slack replaces asynchronous communication like email with the synchronous variety, known to most as “chat.” This is a rather pared down way of describing what they do, but it’ll do for now. Speaking from experience, at my last company Circa we reduced our use of email amongst the team to almost nothing, save for forwarding other inbound emails. It’s truly an incredible and powerful tool.

Yet without establishing reasonable usage behavior could most certainly make for a terrible work culture. 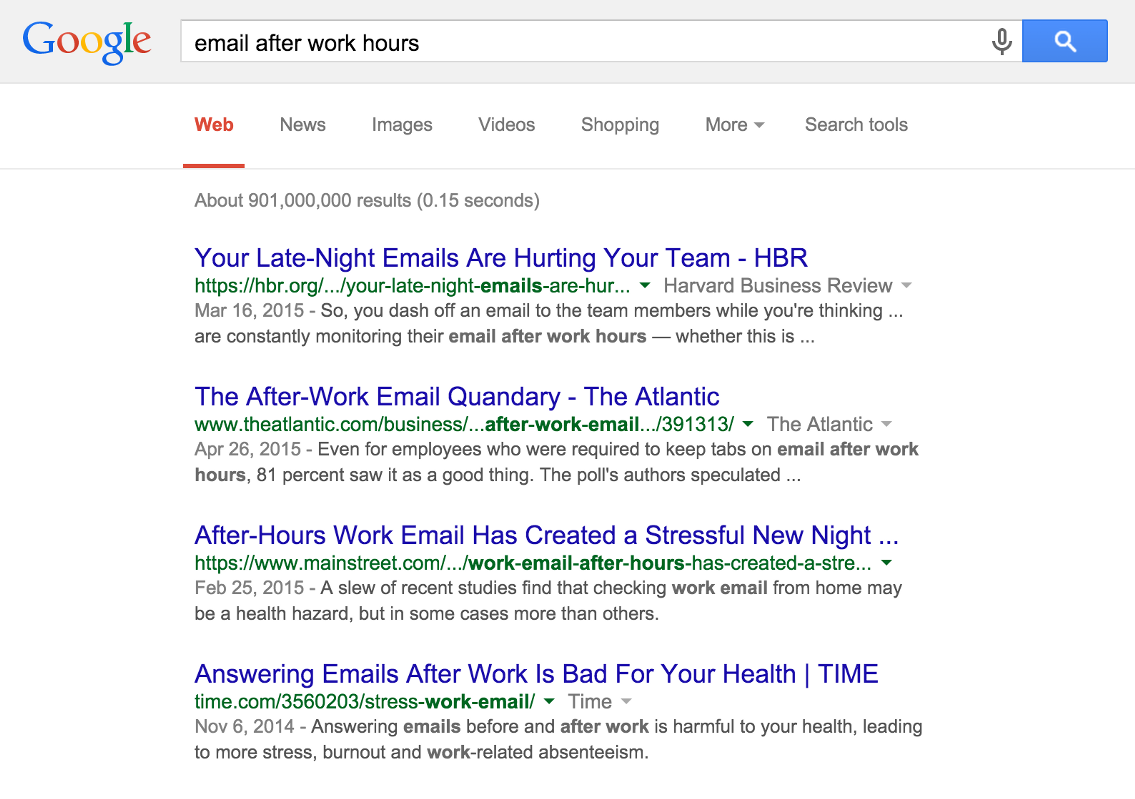 When mobile phones untethered us from our computers, we were thrown into the deep end of an always on, always reachable working world. Feel free to do the research for me on this, but I assume that our after-work-hours email volume has increased steadily. Of note — a simple search for “email after work hours” showed nearly 1 billion results. It’s something that people are talking about at least.

One Harvard Business Review article I read stated “When employees are constantly monitoring their email after work hours — whether this is due to a fear of missing something from you, or because they are addicted to their devices — they are missing out on essential down time that brains need.”

Email is easier to manage in this regard because at least it can be shut off by turning off notifications and not opening your email app. If you’re already in a work culture that doesn’t discourage after hours emails you might be missing out, but at least you can be in some semblance of control.

Because the results of chatting with someone are so immediately felt, being a part of a synchronous organization tends to change the way that you think about communicating with others. We may be more prone to interrupt or be interrupted. I’ve personally been one of the biggest offenders of this — sending messages and expecting a response immediately. When I don’t receive that immediacy, I might grow discontent.

If we’re not careful, we’ll ruin our work/life balance

Allowing ourselves to be constantly interrupted will mean that our precious downtime that’s necessary for productivity could be destroyed. Even the tone of the work communications we receive after hours can have an impact on our personal lives. This article stated “[A]nger was more likely to spillover into people’s personal lives and interfere with their thoughts and behaviors.”

This problem got me thinking — could it be possible for the most popular synchronous business communications tool to correct the problem with an elegant solution before we irreparably change the rules and expectations for communication? I’d like to think so. So while this work wasn’t authorized or commissioned by Slack, I figured it worth the exercise to see what a solution might look like.

Solution 1: Do Not Disturb 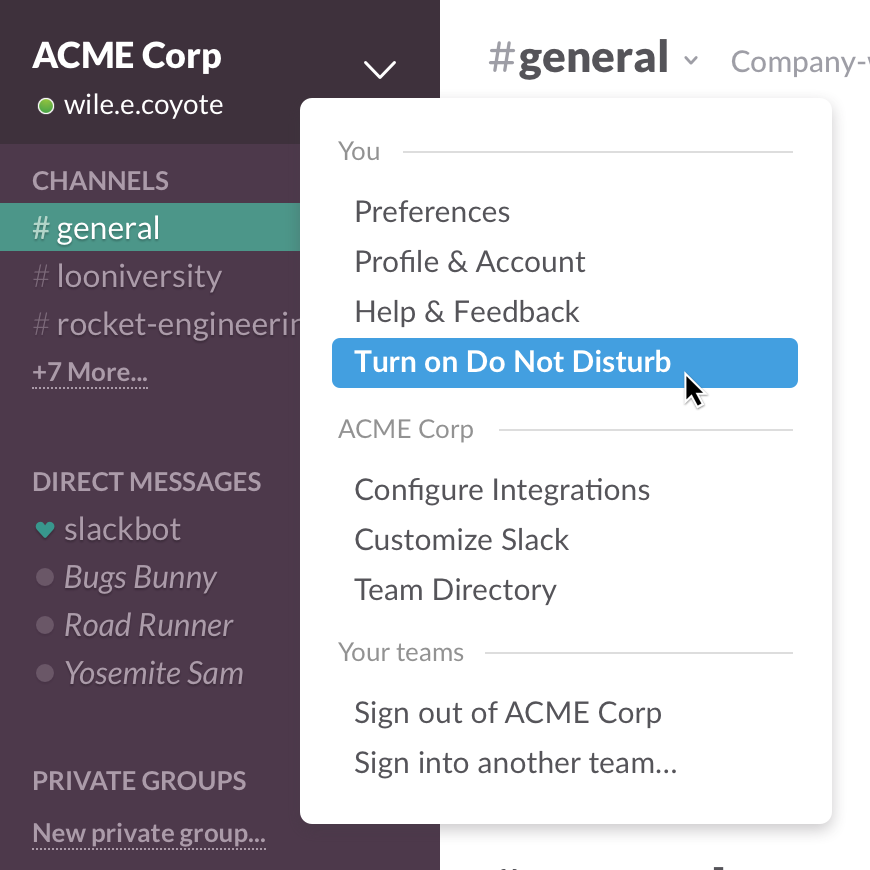 One of my absolute favorite features of iOS is its “Do Not Disturb” feature. I’ve written a bit about it in the past and how helpful it’s been to me. So it should be obvious that the first potential solution for the stated problem would be a similar feature.

Do Not Disturb would be a personal feature — something that an individual would enable whenever they either need to be heads-down and get some work done without interruption, when they’d prefer to have some time for themselves outside of work hours, or perhaps when they’re on vacation or sick. 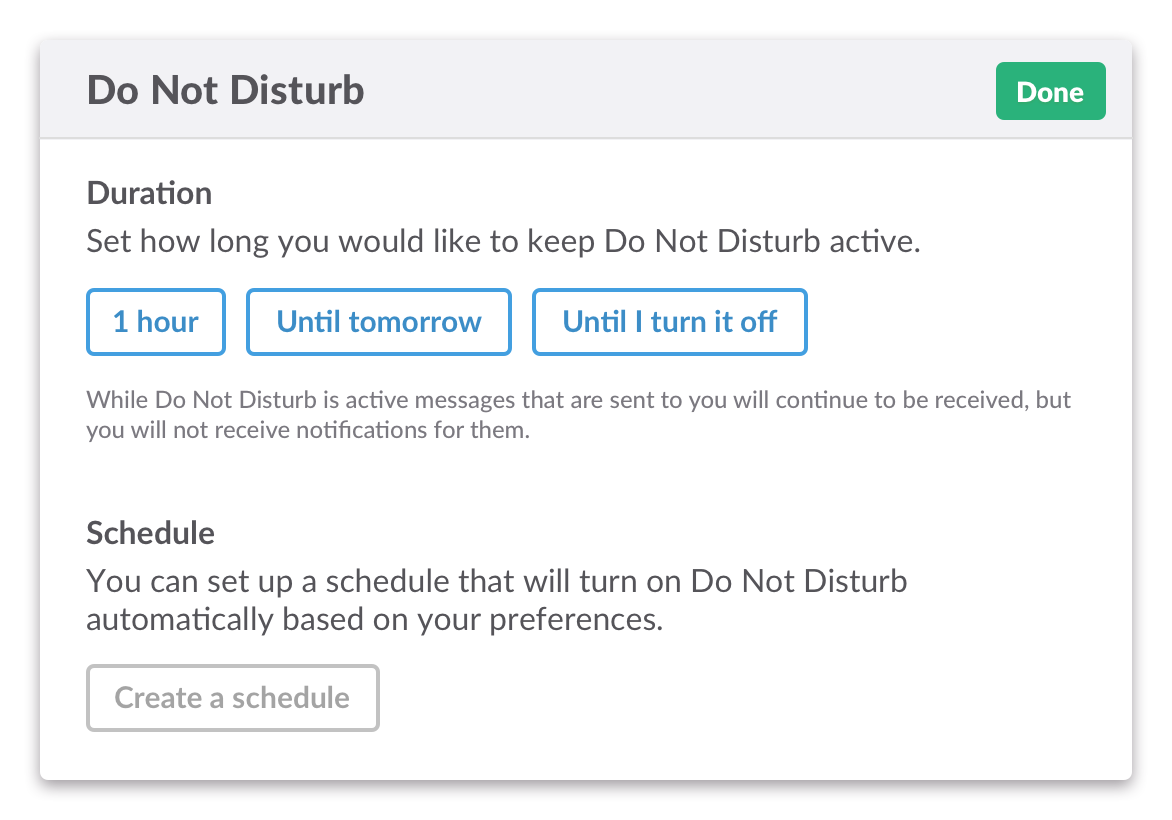 As you can see above, there could be a number of options for how to set your Do Not Disturb status. Need a short bit to power through and get stuff done? Just select the “1 hour” option and you’re good to go! Or if a more robust solution is your desire, you could set up a schedule for it to turn on automatically.

But what does it do?

When a message is sent in Slack, its recipient gets a subsequent notification about said message. This means that no matter what time of day or what that recipient may be doing, they’ll likely be interrupted. The goal of this Do Not Disturb feature would not to prevent the message from being sent, but rather defer the resulting notification till a later time.

However, a potential issue pops up here. What if despite your desire to not be interrupted, something very important comes up and someone needs to get in touch ASAP? Here’s how that might be solved:

The beauty of a feature like this is that it could help solidify boundaries between someone’s work and their downtime from work. It could also help managers empathize with their direct reports and their ability to get work done. If a designer that reported to me wanted to just have a day of no interruption to get shit done, setting Do Not Disturb up would communicate to me, the manager, that they’d really like to keep their heads down and crank. Something makes me think this could dramatically help productivity, and most importantly, happiness and sanity.

All of this thinking around setting up individual barriers also got me thinking about what an implementation across the entire business might look like…so I came up with something there too.

Startups and plenty of other companies might cringe at the thought of “business hours.” Having co-founded three of them my view on the concept certainly evolved over time. At first we’d put in 12–14 hour days and barely have enough time for our personal lives — which included sleep and food. Over time I discovered the benefit of this elusive thing that some called a “work/life balance.” If you need some literature to back this up, Scientific American has an incredible and thorough writeup on the benefits of downtime.

People are working even more today — an average work week has creeped up to 47 hours. While that may not seem a dramatic amount higher than the common “40 hour work week,” economist John Maynard Keynes predicted in the 30’s that we’d be working no more than 15 hours a week. While it’s doubtful we can make it there any time soon, I do think setting expectations and creating “business hours” could be incredibly helpful for productivity and employee satisfaction. 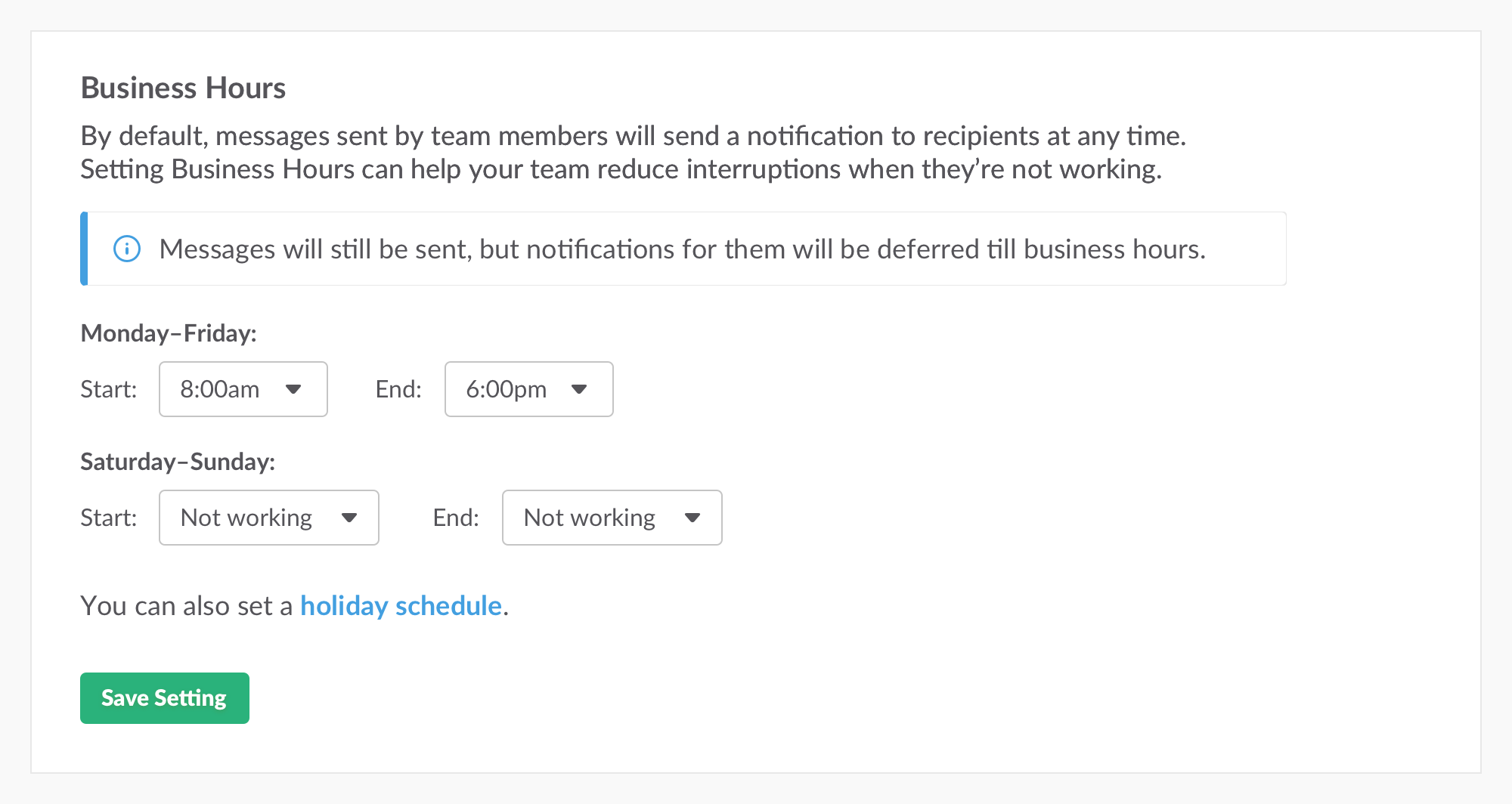 Setting up Business Hours across teams in Slack could be the solution for this. While there are plenty more edge cases and other things not shown in the above example, the basics are there: set working hours during M-F, the weekend, and perhaps a holiday schedule. Once the schedule is set, messages sent outside of those hours would result in something similar to the Do Not Disturb feature as seen above.

One good sign is that Slack already does have a feature that can do a little bit of this now. Including @channel in a message will notify everyone that’s in the chat room, but using @here will only notify the people that happen to be online at that moment. It’s a great first step!

Establishing a work culture where interruptions are discouraged and downtime is encouraged could be incredibly powerful for employee morale. They could spend more dedicated and work-thought-free hours with their families, friends, or a good book. That added personal time would most certainly add to their productivity at other times.

While I have no idea if these ideas or potential solutions are at all of interest to Slack, I do believe that it’s critical that they understand their place in this problem. If the software we use to communicate doesn’t help us empathize with our teammates, their desire to work uninterrupted, or respect their necessary downtime, we might find ourselves in a really sad state of the working world.

In the meantime if you’re using a communications tool like Slack for your business, maybe give some thought before interrupting people after the work day…they’ll probably appreciate it. 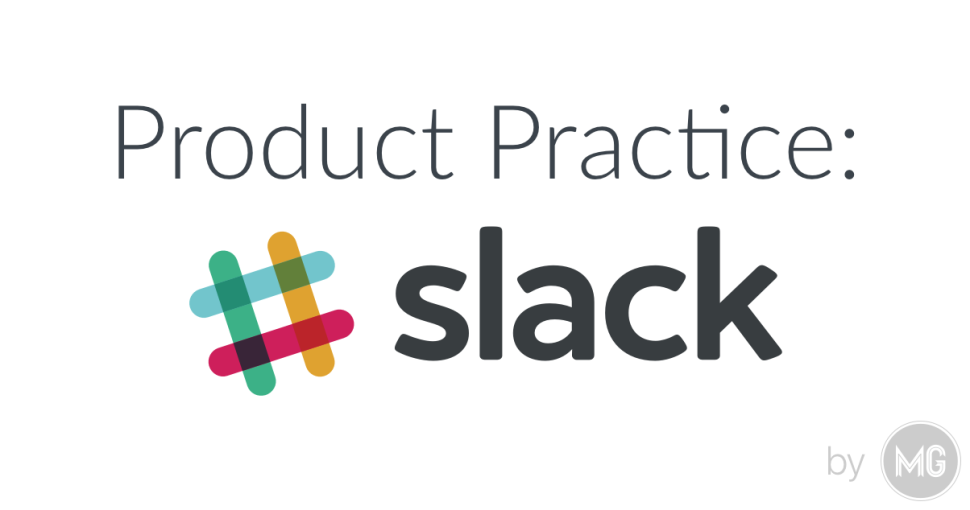