As August moseys toward its end and people increasingly talk about summer in the past tense, one’s mind naturally drifts to other summers of years gone by. For many of us, these were marked, along with the inevitable sunburns and summer camps, by aquatic feats of daring: cliff jumps, rope swings and diving boards.

Cliff jumps and rope swings are now, of course, all but extinct, but diving boards, as the most controlled of the three environments and the only one presided over by lifeguards, have lingered somewhat longer than their peers. Though they, too, have been systematically phased out or down-graded over the years—of New York’s 67 pools, only three have diving boards, The New York Times recently reported: the Tony Dapolito Recreation Center in the West Village, John Jay Park in Yorkville and Fort Totten Park in Bayside, Queens. And of those, all are of the relatively tame, one-meter variety. Gone are the three-meter springboards of diving platforms that inspired terror and awe in younger kids and conferred bragging rights on older ones, especially those who dared to dive or flip from such great heights.

Indeed, a google search of “high dive New York” turns up, for the first four hits, a dive bar in Park Slope, followed by a diving club based out of Purchase college. The Astoria high dive, meanwhile—an eye-catching, Moses-era concrete platform that lends even greater drama to the city’s largest pool—is poised to become an amphitheater. There is no longer any place in the city where an amateur can screw up his or her courage to take a thrilling plunge.

This is hardly a new phenomenon, to be sure. Several years ago, when the parks department started discussing what was to become of the Astoria high dive, where the U.S. Olympic trials were held in 1936, 1952 and 1964, and which includes a diving platform 32 feet above the , there was scant discussion of restoring the platform to use. And after years of neglect, an amphitheater seems a reasonable adaptation for the visually stunning spot—it’s hard to imagine a group of local swimming enthusiasts forming a diving comedy troupe called the Aqua-zanies today, as they did in the 1940s. (As Bowery Boogie reported, the troupe became “America’s leading comedians” and even went on an international tour in the 1950s.)

And in fact, when the Astoria platform first closed in the 1970s, having fallen into disrepair, diving boards were already disappearing from swimming pools across the country because of lawsuits, or fear of lawsuits. Municipalities, fearing liability, increasingly decided to remove diving boards—both the high and the low variety—despite their enormous popularity. As one lawyer told the The Times in 2003 when Armonk was removing its diving board, though “‘the deep pocket phenomena’ did mean there were lawsuits over high-board accidents, he said few were successful. The fear of lawsuits, however, held sway.”

Nowadays, they’ve largely vanished even from backyard pools, as insurance policies and contractors balk at installing them. Indeed, it’s exceedingly rare for new diving boards to be installed anywhere outside of university or school settings. High dives, certainly, are only to be found in such places—equipment reserved for trained athletes, rather than a rite of childhood.

Though diving boards remain, in their modesty-high form, quite popular at the few pools where they still exist: the Dapolito’s diving board often draws a line of kids and adults, according to The Times, even if, at roughly four feet above the , derring-do is largely limited to those who attempt back flips.

For everyone else, there’s always the less impressive variety of aquatic daring: seeing how long you can hold your breathe underwater. 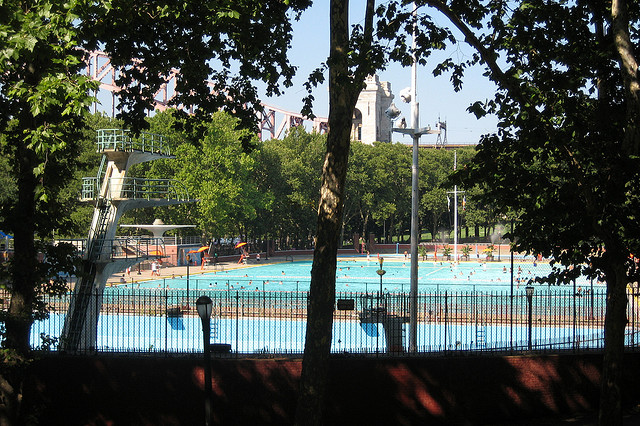