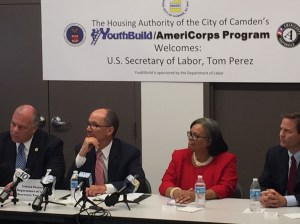 Sweeney, Perez, Mendez and Norcross at Thursday’s roundtable in Camden

CAMDEN – US Labor Secretary Tom Perez stopped in Camden Thursday morning to take a tour of the YouthBuild facility, which recently won a $1.1 million grant from the Department of Labor to continue offering job training programs for disadvantaged young people in the city. The YouthBuild Americorps program offers young people ages 16-24 certifications in skills like carpentry, masonry and building maintenance. YouthBuild members learn on the job by rehabilitating public housing.

Senate President Steve Sweeney was in attendance, participating in the tour and subsequent forum discussion along with Congressman Donald Norcross. The forum included members of the Housing Authority of the City of Camden, YouthBuild directors, affiliated employers and participants from the program.

With Camden’s population skewing very young (nearly 50% of residents are under 25 according to the 2010 census), City Council President Francisco Moran stressed the importance of luring in new businesses to set down roots and ensuring that young people in the city have the skills to match.

Of Congressman Donald Norcross, who has been actively courting companies with tax incentives to move into Camden, Moran said “[since] he took office, on the state level in and in Washington, he’s been doing nothing but opening doors.”

“When we all work together, things can get done,” said Sweeney. “There’s been enormous courage on all levels of government in this county and in this city to actually show people in Camden that we care.”

Senator Bob Menendez  paid a visit to Camden recently, where he called for a greater maximum payout to cities that earn grants from President Obama’s Choice Neighborhoods Initiative. The plan originally asked for $250 million awards from the Department of Housing and Urban Development, a figure that quickly fell to the expected $20 million that Camden is competing for today.

Several members of the crowd at the YouthBuild forum echoed Menendez’s sentiment that housing, job training and economic development should go hand in hand.

“Homelessness for our youth is a very, very hard situation,” said HACC director Dr. Maria Marquez. Responding to one YouthBuild director’s call to restore down-at-the-heel transitional housing units for homeless YouthBuild trainees, Marquez agreed that adequate housing and a restoration effort for the program’s own housing units would be crucial.

“We strive very hard to find places for them,” she added.

“Our biggest cheerleader is enjoying a much-deserved vacation” said Moran of Mayor Dana Redd, who was not in attendance Thursday. Superintendent of Schools Paymon Rouhanifard demurred from the spotlight, but gave a wave and smile from the crowd. 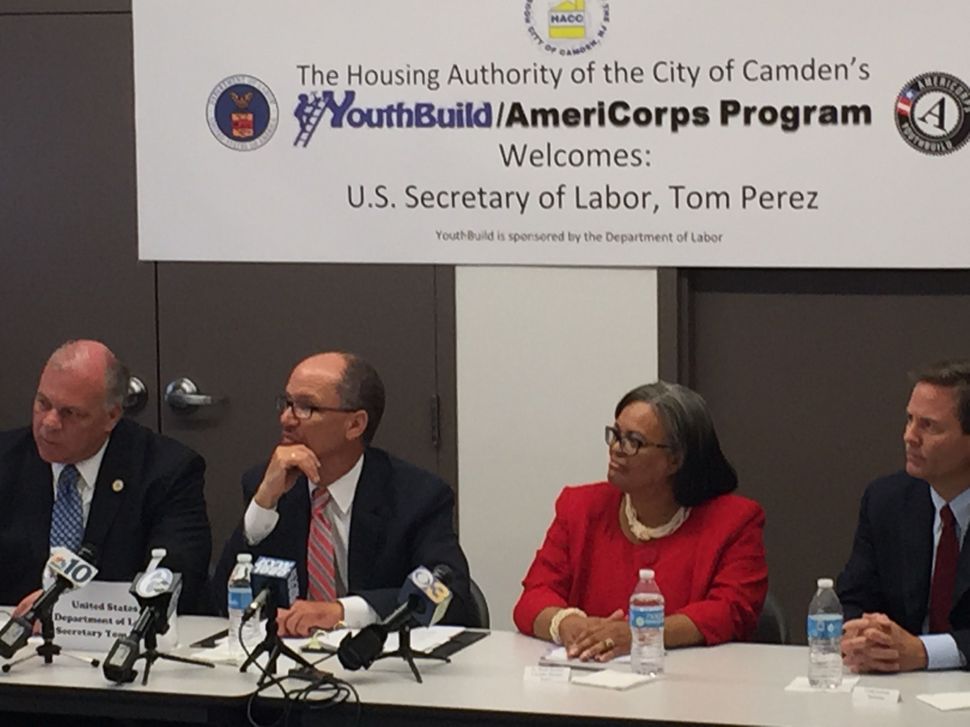