In the single most bizarre passage, Mr. Freidman, who was forced last month to declare bankruptcy on 22 of the companies he owns, details how he has adopted a more youthful frame of mind to tackle the challenges that Uber and other ride-share apps are presenting to the traditional taxi business.

“I’m 44,” he declares, “I’m an honorary millennial.” While showing off Thriller era zipper-covered pants, he goes into detail on the fresh perspective his new look has given him. “I used to have long hair, now I have short hair. I can dress a little like hipper and cooler.”

In another scene, the former billionaire shakes a snow globe and peers into it, presumably looking for wisdom. Only when the camera zooms in does the viewer realize that instead of revealing a New York skyline or traditional snow globe fare, this one features a hand with its middle finger sticking up in a heroic act of defiance.

I’m 44, I’m an honorary millennial. I used to have long hair, now I have short hair. Now I can dress a little like hipper and cooler. And I think a lot differently.

One of the things that makes this video so jarring is that the utterly charm-free Mr. Freidman clearly believes his winning personality has played a role in the success he’s enjoyed to date. In addition to reeling from the collapsing value of his medallions, Mr. Freidman was also hit with a lawsuit brought by Attorney General Eric Schneiderman for underpaying his drivers and is also being divorced by his non-honorary millennial wife (she’s 24). Nevertheless, Mr. Freidman is shown, in slow motion no less, literally kicking the tires of one of his vehicles, lest the viewer not grasp just how deeply this wearer of Oyster Rolexes empathizes with the common man.

No mere description can properly encapsulate just how odd this video is. So below is a transcript of the entirety of Mr. Freidman’s monologue. But you really have to see this thing for yourself.

My first two medallions were maybe $150,000 apiece in the late 90’s when people just didn’t want to be in this business.

The prices I think got up to about … ugh …  $1.3 million for a corporate medallion.

Uber is circumventing regulation. There is a rulebook that’s 200 pages just for medallion owners…that we have to follow. Everything from what the meter looks like, how you’re supposed to work, what your supposed to charge. If the regulations that are out there right now were enforced, then we’d be fine.

I like a challenge. Since last summer I ripped everything up… and I’m rebuilding it from scratch…that’s really exciting.

I’m 44, I’m an honorary millennial. I used to have long hair, now I have short hair. Now I can dress a little like hipper and cooler. And I think a lot differently.

I’m thinking about what can I do.

Runs hand through hair some more

I always brag that my business times are either “awesome,” “excellent” or just “very good.” So I think we’re on the bottom of “very good” right now.

The video accompanies a long article in Bloomberg Business and it’s something near a tragedy that some of the quotes from the article didn’t make it into the video. Like this gem: “There’s a guy in Appalachia, no shirt, hasn’t had a shirt all winter, right? He’s got a mullet. A mullet. A mullet. Right? He’s married to two of his first cousins, right? But he’s got a gun in his hands. And he’s born with a gun in his hands. I’m that guy.”

The story ends with one of the great tldr quotes of all time: “If anything is wrong, it’s the fact that I need to cool it. … I can’t be such an arrogant prick.” 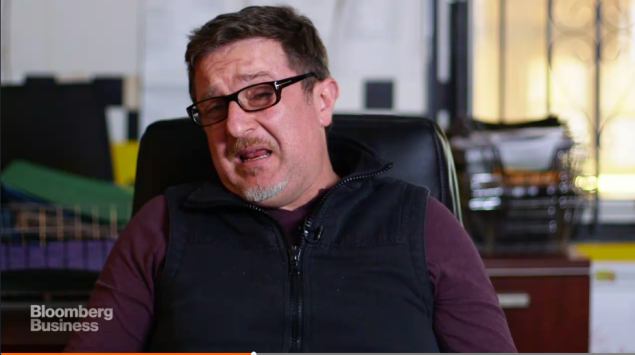 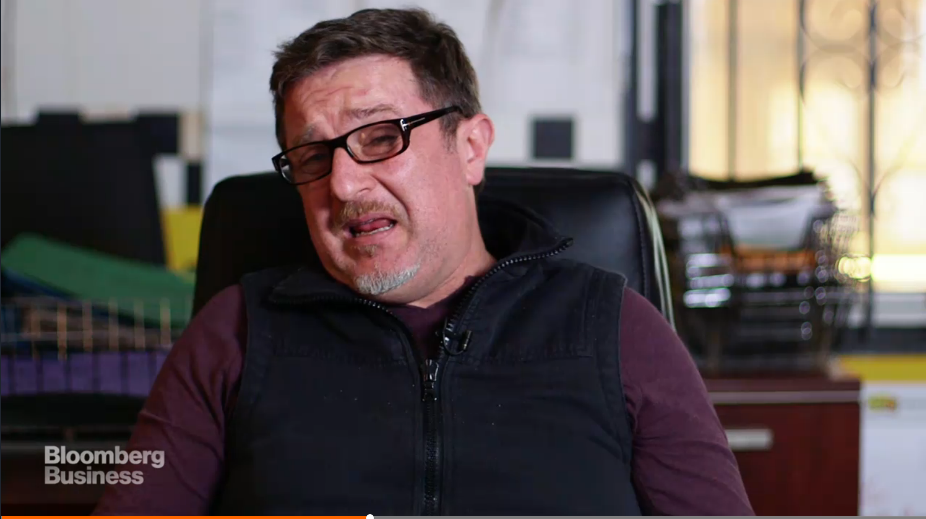