Mark Goldblatt, chair of the Educational Skills Department at the Fashion Institute of Technology and author of the novel Finding The Worm (Random House), offers a crash course to surviving your freshman year.

1) Show up on time, every time. It should go without saying, but you need to get to class before your professor—i.e., five minutes early—and be prepared to take notes the moment he enters. From day one, you should think of attending classes as serious work. You cannot consistently waltz in several minutes late and expect to pass.

1.1) Dropping your books on your desk before class starts, then heading out to grab a cup of coffee, doesn’t mean you were in attendance at the start of class. Your books are not you. Think of how an employer would react if you dropped off your briefcase at the start of the day, then left for a half hour. Metonymy does not count.

1.2) If, on a rare occasion, you arrive late, enter inconspicuously. Take the nearest vacant seat. Don’t wave to your friends. Apologize to the professor after class.

1.3) Do not text in class. Do not update your Facebook status, post to Instagram, etc. The ringer on your phone should be turned off. It should not be set to vibrate, which can often be heard across the classroom.

2) Participate in class discussions. Students who sit in the back of the room and never ask questions might as well wear a T-shirt that reads, “I’m still in high school.” Hey, Fonzie, you’re paying tuition! Get in the game! If you don’t understand something, ask for an explanation. If you have something relevant to add, make a comment. If you disagree with an idea put forward, do so politely but firmly—using logic, not emotion. (“Because, because, because…feelings!” is not an argument!) Never criticize the motives of those with whom you disagree.

3) Look things up. Look up words if you don’t know their definition. (“Metonymy,” for example. What, did you just let that pass?) Look up facts if you’re unaware of them. Look up theories if you want to understand their influence. The ultimate gauge of whether you’re college material isn’t what you know; it’s what you want to know. Lack of intellectual curiosity can’t be remediated.

4) Treat your professors respectfully, but not reverentially. Let’s start with a trivial point: Students are often unsure how to address their professors. That’s natural because faculty come with a variety of titles: Professor, Associate Professor, Assistant Professor, Adjunct Professor, Lecturer, Adjunct Lecturer, Instructor, etc. You don’t need to sort this out. “Professor” is the default unless you’re told otherwise. Avoid “Mister” and “Ms,” which, again, scream out, “I’m still in high school.”

4.1) Be wary of any professor who asks you to call him by his first name. It’s a harmless gesture on his part, but remember that your relationship with him is a professional one. He’s not your pal—he’s not going to let you slide because you think of him as a BFF. Your BFFs don’t grade you at the end of the semester.

4.3) If a professor in (let’s say) an art history class begins spouting off about U.S. foreign policy, take what he says with a grain of salt; many professors are frustrated political commentators, and the classroom is their opportunity to vent before a captive audience. If you disagree with what he says, engage him logically. If what he says offends you, shrug it off—you don’t have a right not to be offended. The situation only becomes problematic if the professor becomes belligerent, or if he veers off topic so consistently that the digressions overshadow the syllabus…if discussions of Van Gogh’s Starry Night, for example, always seem to devolve into rants about the “military industrial complex.” If this happens, report the professor to his chairperson, or to the dean, or even to local media.

4.4) Keep in mind that few college professors are trained as teachers. Most have advanced degrees, which means they know important stuff, but many won’t have the slightest idea how to get what’s in their head into your head. That’s why you need to ask questions. (See #2, above.) If you sit through an entire semester and learn nothing, that’s half the professor’s fault and half your fault. Think of yourself as a consumer. Get your money’s worth.

4.5) Whenever possible, attend public lectures…even if, especially if, you are repelled by the speaker’s point of view. Sit there, and take it, and be repelled, and learn. If you want a “safe space,” don’t attend college. Stay home, and pull the bed sheets over your head. College should be the least safe intellectual space you’re ever lucky enough to inhabit.

5) Know the basics of grammar and punctuation. There is, technically, no such thing as good grammar. You never read a published article and think, “Wow, the grammar was excellent in that piece.” If you don’t notice grammar, that’s good. If you do notice grammar that’s a problem…not because you’re annoying your readers (though you are) but because the errors are distracting from what you’re attempting to say. If a reader is following the logic of your argument, and suddenly thinks to himself, “Shouldn’t that be a period, not a comma?” guess what he’s no longer thinking about. Answer: the logic of your argument.

6) Understand the difference between fact and opinion. By definition, a fact cannot be rationally disputed; an opinion can be rationally disputed. “Barack Obama is the 44th president of the United States” is a fact…unless you’re a “birther,” which is where the word “rationally” comes in. “Barack Obama is an effective president” is an opinion. The point of going to college is not merely to acquire facts but also to exchange opinions—with professors and fellow students. But you should be able to support your opinions using facts. You’ll never sound educated, you’ll never be educated, until you can do that. Oh, and until you can do that, you’re probably better off keeping your opinions to yourself.

6.1) Once you understand the difference between fact and opinion, you should be able to write a competent academic essay. An academic essay is an opinion, called a thesis, supported by facts. All of your opinions come from facts. (Even if those facts include other people’s opinions…the facts, in that case, are exactly what you heard, and exactly who said it.) When you write an academic essay, you’re just stating your opinion first, as a thesis, and supporting it with the facts that led you to believe it in the first place. That’s Freshman Comp in 91 words. Freshman Comp is the sine qua non of any liberal arts college because you need to be able to construct and present intellectual arguments.

6.2) You may never get around to practicing academic essay writing, or hashing out the difference between fact and opinion, in Freshman Comp because many Freshman Comp teachers are frustrated novelists or poets who’d rather be teaching Creative Writing. They’ll talk instead about “discovering your voice” and “speaking your truth.” Smile sweetly at them, and do their assignments, but keep in mind that your essential takeaway from Freshman Comp is how to support your opinions with facts—i.e., how to write an academic essay.

7) Take general survey courses before you take specialized elective courses. In an ideal scholarly world, you’d take, for example, one semester (at least) of world literature before you took American literature, and one semester of American literature before you took a course in Jewish American Fiction or the Harlem Renaissance or The Beat Generation. As strange as it sounds, many colleges now allow you to jump from basic requirements—often, just Freshman Comp—to sexier electives. But knowledge without context isn’t useful knowledge; it’s often just advocacy masquerading as knowledge. It can distort your perspective and become worse than knowing nothing whatsoever about the subject.

8) Take a couple of introductory courses in subjects you don’t like. Just trust me on this one. You can thank me later.

9) Don’t get too excited over high grades. You probably think you know what college grades mean: A means excellent; B means very good; C means about average; D means barely passing; F means failing. Various pluses and minuses up and down the scale serve to fine-tune the message. If that were true, however, most grades would cluster around C. But according to a 2010 study by Stuart Rojstaczer and Christopher Healy for Teachers College Record, the mean Grade Point Average at public colleges is 3.00—which is equal to a B. For private colleges, the average is 3.30—which is roughly an A-/B+. What you think you know about grades, in other words, is wrong. Feeling pretty good about that B you got on your first Psych exam? Not so fast, Sigmund. There’s a decent chance half of your classmates took home A’s.

10) Respect the idea of higher education. You’re in college even when you’re not in class. Act like it. There’s an attitude that’s far too prevalent among freshmen that runs something like, “Hey, I’m a rebel…if I want to be loud and obnoxious, I’ll be loud and obnoxious.” If you recognize that mindset as your own, you need to confront two painful truths: First, you’re not a rebel; you’re a cliché. Second, you’re not emotionally ready for college; consider a trade school.

10.1) College classes, unlike high school classes, don’t necessarily end on the hour. So remember, as you’re walking from one class to the next, that other classes are going on. Out of respect for students in those classes, keep your voice down. This is true whether you’re indoors or outdoors.

10.2) Curse words don’t shock anyone anymore. They only make you sound like a guest on Jerry Springer. If every third word out of your mouth is an expletive—and this includes ethnic and gender slurs allegedly “reclaimed” as familiarities—you’re telling the world you lack the vocabulary to adequately express your thoughts.

10.3) Bear in mind that you stand at the end of a long line. The overwhelming majority of the students who came before you, whether they enrolled in a community college for only one semester or graduated with honors from a PhD program, would trade places with you in a heartbeat. They’d happily relive the intellectual journey on which you’re about to embark. Don’t screw it up. Do them proud. 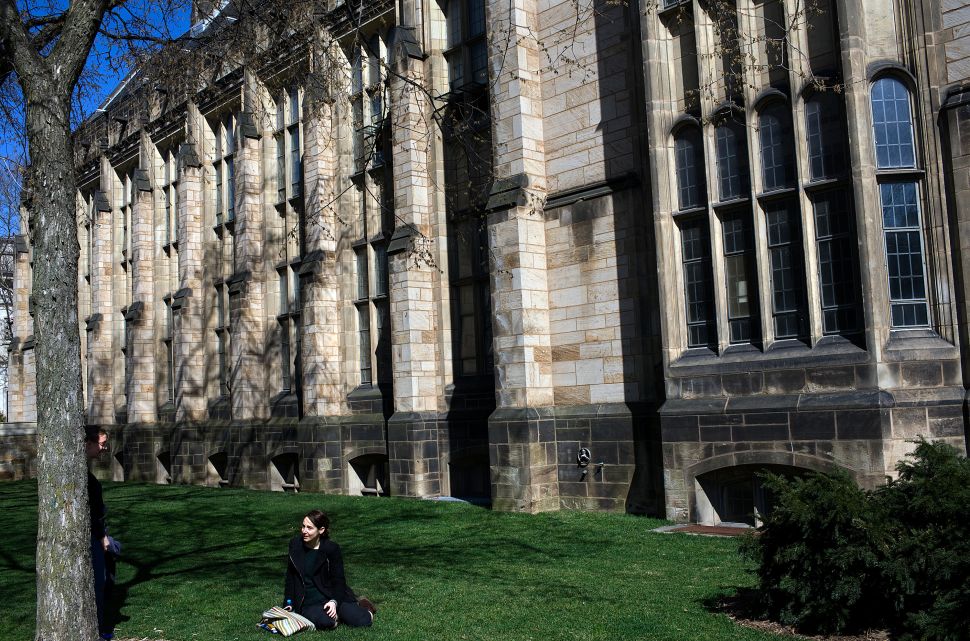