After years of holding herself above the law, telling lie after lie, and months of flat-out obstruction, HIllary Clinton has finally produced to the FBI her server and three thumb drives. Apparently, the server has been professionally wiped clean of any useable information, and the thumb drives contain only what she selectively culled. Myriad criminal offenses apply to this conduct.

Anyone with knowledge of government workings has known from inception that Hillary’s communications necessarily would contain classified and national security related information. Thanks to the Inspector General for the Intelligence Community, it is now beyond dispute that she had ultra-Top Secret information and more that should never have left the State Department.

Equal to Ms. Clinton’s outrageous misconduct is that of the entire federal law enforcement community. It has long chosen to be deliberately blind to these flagrant infractions of laws designed to protect national security—laws for which other people, even reporters, have endured atrocious investigations, prosecutions, and some served years in prison for comparatively minor infractions.

During the same years that Hillary was communicating about national security and world affairs off the grid, the Department of Justice has had no qualms threatening news reporters and prosecuting whistleblowers under the Espionage Act.

It’s high time for a special prosecutor to be named to conduct a full investigation into Ms. Clinton’s likely commission of multiple felonies, including a conspiracy with Huma Abedin, Cheryl Mills, and possibly others, to violate multiple laws.

While the FBI and Department of Justice have willfully ignored Hillary Clinton’s outrageous conduct, they didn’t hesitate a minute to investigate and prosecute former CIA Director and national hero, General Petraeus. He was just tarred, feathered and ridden out of the CIA on a rail for sharing some information (his own notebook) with his biographer who was both in the military and had a top secret clearance. Yet, Petraeus did not have a secret server set up to house his classified and top secret information or digital satellite imagery; he destroyed nothing; and, there was no “leak.” But that’s not all.

During the same years that Hillary was communicating about national security and world affairs off the grid, the Department of Justice has had no qualms threatening news reporters and prosecuting whistleblowers under the Espionage Act. To hell with the First Amendment and Supreme Court precedent, even the New York Times reported that this administration prosecuted more reporters and whistleblowers for “espionage” than all prior administrations put together.

Remember Fox news reporter James Rosen? The Holder Justice Department not only seized his emails immediately and without his knowledge, they suggested he was a criminal “co-conspirator” in a leak case—under the Espionage Act—which carries a ten-year term of imprisonment.

And they quickly indicted former House Speaker Dennis Hastert and Senator Menendez on extremely stretched or tortured views of vague criminal statutes and factual allegations of conduct that may well not be criminal. Senator Menendez can’t vacation with his best friend but Hillary Clinton and her “Foundation” can accept millions of dollars from foreign governments seeking to curry her favor.

Yet there’s been no criminal investigation of Ms. Clinton and her cabal? They couldn’t seize her server months ago while it contained all the emails? They couldn’t put a stop to it from the beginning?

Oh right, I forgot. As the Wall Street Journal reported, Ms. Clinton had declined to allow an Inspector General at the State Department during her entire tenure—so there was no internal oversight. And oh yes, her name is Clinton, and she has long deemed herself above the law. The rules only apply to everyone else.

But wait, there’s still more. The current Assistant Attorney General for the Criminal Division of the Department of Justice, Leslie Caldwell, and her Chief of the Corporate Fraud Section, Andrew Weissmann, destroyed Arthur Andersen and its 85,000 jobs on unfounded charges of obstruction of justice for destroying documents the Supreme Court said it had no legal obligation to keep. The laws governing Ms. Clinton’s obligations are clear. Nonetheless, they haven’t even convened a grand jury to look into Ms. Clinton’s longstanding assertion that she wiped her server clean—of documents she was legally required to keep?

On top of that, there can be little doubt that Eric Holder and other high-ranking FBI and DOJ officials themselves wrote Ms. Clinton at Clintonemail.com—not to mention countless communications with the President and “All His Muses”—Counter-terrrorism advisor Lisa Monaco, National Security Advisor Susan Rice, and then White House Counsel Kathryn Ruemmler (not to mention Valerie Jarrett)—about Benghazi and all other top secret and classified issues. The DOJ hasn’t subpoenaed the emails from any of the recipients—or the internet service providers? Or looked for them on the backup government servers of the accounts of all the recipients? And the State Department still today is making statements defending her?

Not only did Ms. Clinton deliberately demonstrate disdain for the Federal Records Act and nullify the protections of the Freedom of Information Act, she violated the Espionage Act by having information relating to the national defense on her server at all. And her deliberate disregard for national security made the job of all hackers that much easier.

As Andy McCarthy explained it in the National Review:

The Inspector General for the Intelligence Community has advised Congress that even in the few emails he has reviewed, there was top secret information—in the form of digital satellite imagery and signals intelligence. Regardless of how it was marked, and no doubt Clinton will blame others, even a neophyte would have known that such information was of the highest secrecy  Not surprisingly, the first seeds of Clinton’s deflecting the blame to underlings was sown by her protectors in the State Department itself last night.

Aside from that, her knowledge and intent do not matter under some of these statutes and are indefensible under others. General Petraeus certainly had no criminal intent, and neither did any of the reporters.

Ms. Clinton, however, established her entire system to avoid the law and in violation of the Espionage Act—as she and her co-conspirators removed all records from the State Department from its inception. Compounding her crimes, she knowingly and willfully destroyed whatever she wanted to destroy—despite or more likely because of—the incriminating information it contained and in the face of the Benghazi investigation.

There’s still more. The countless false statements are crimes under 18 United States Code Section 1001—both by Ms. Clinton to Congress (“no classified information”) and in writing by Cheryl Mills to the State Department and just filed with Judge Sullivan—in which she states: “On matters pertaining to the conduct of government business, it was her practice to use the officials’ government email accounts.” We already know that Ms. Clinton used her personal server exclusively.

Anyone else would have been arrested by now. Until there is a massive change in this country, justice is a game.

Title 18 United States Code Section 1001 makes it a crime for anyone to “knowingly and willfully” falsify, conceal, or cover up “a material fact,” or make “any materially false, fictitious, or fraudulent statement or misrepresentation,” etc. Countless people are convicted felons under this statute—some for offenses that would never occur to anyone even to be a crime. And these are just a few of the possible statutes that it would appear to any federal prosecutor that she and her corrupt cabal violated.

As Lt. Col. Ralph Peters had the guts to say last night on FoxNews, “Hillary Clinton is a criminal.” Military heroes who have risked their lives for this country have gone to prison for less.

The Department of Justice’s selective prosecutions have been well-document. Its favoritism and targeting practices must end.

As discussed on NewsMaxTV’s Hardline last night, it’s time for a national outcry for the appointment of a special prosecutor to investigate and indict Ms. Clinton’s flagrant violations of some of our most important laws. Anyone else would have been arrested by now.

Until there is a massive change in this country, justice is a game.

CORRECTION: An earlier version of this story misstated the rank of Ralph Peters. He is a lieutenant colonel, not a general. 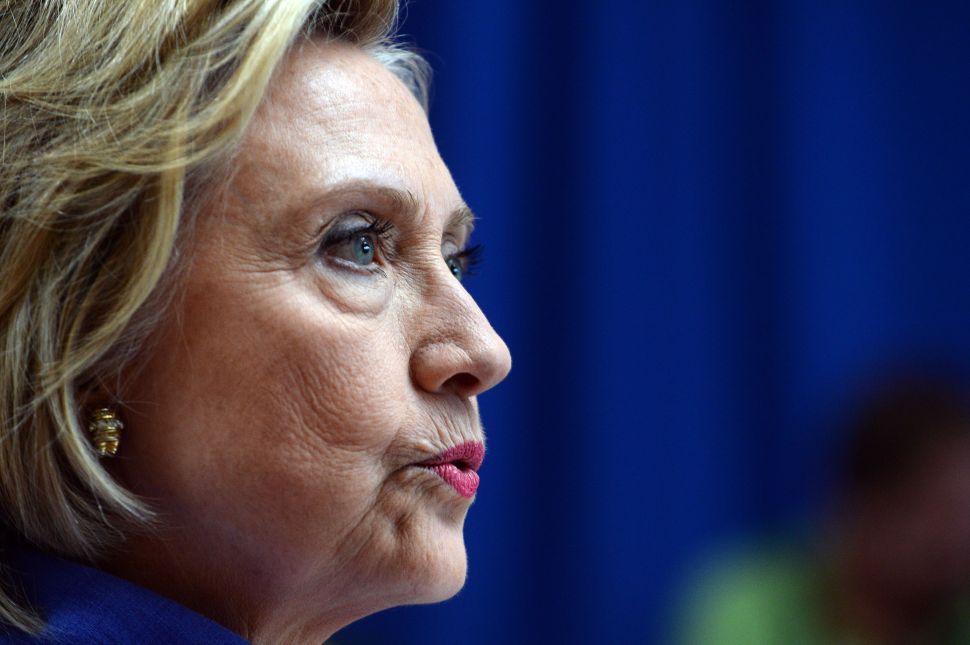