Syfy is in a strange place right now. For many, the network is something of a punchline that mostly exists to churn out a Sharknado movie once every summer. But recently, Syfy seemed to remember that once upon a time they spelled the word Sci-Fi correctly and maybe Tara Reid with a chainsaw hand shouldn’t be their bread and butter. Last December the three-part event series Ascension debuted, and while it was extremely enjoyable and refreshingly high-concept the ratings were…not too great. Syfy opted to not pick up Ascension for a full series, citing “so much high profile development in the works” as the reason.

It was a large swing and a miss for Syfy, but at least they weren’t swinging at a tornado full of sharks.

But as for all that “high-profile development?” Promising! Incredibly promising. Currently filming is Syfy’s adaptation of Lev Grossman’s The Magicians series, which is a fantastic trio of novels that are basically Harry Potter if Harry and friends spent most of their time drinking, getting high and screwing.

And then there is the show the network is calling “the most ambitious series in Syfy history,” The Expanse. Based on the book series of the same name by Daniel Abraham and Ty Franck (under the pen name James S. A. Corey), The Expanse will begin with a two-night premiere December 14 and 15, and will continue regularly on Tuesdays for the remainder of its 10-episode season. Set 200 years into the future, The Expanse tells the story of “hardened detective” (Hung star and former Punisher Thomas Jane) and a “rogue ship’s captain” (Magic City‘s Steven Strait) working together on a missing person’s case that  “evolves into a race across the solar system to expose the greatest conspiracy in human history.”

So what can I say about The Expanse? Well, I’ve read the first book in the series, Leviathan Wakes, and I’ve also seen the pilot of the show. On the book side, the story is dense for certain, but at the same time surprisingly fun. It’s hard to get bogged down in sci-fi plot details when they contain concepts like “low gravity jui-jitsu.” If you don’t believe me, Game of Thrones author George RR Martin called it a “kickass space opera.”

As for Syfy’s The Expanse, at the very least it looks great. Terry McDonough, who among numerous other things directed the surreal “Bug” episode of Breaking Bad, helmed the first two episodes and seems to have a handle on making outer space (like Walter and Jesse’s meth lab) seem both overwhelming and claustrophobic at the same time. Syfy seems to have put some serious money towards effects as well. Two-Headed Shark Attack, this is not.

Mark Fergus and Hawk Ostby, the writing team who helped set the entire tone of the Marvel Cinematic Universe with Iron Man, penned the Expanse pilot. There is a lot of info for Fergus and Ostby to stuff into that first hour, but the duo finds their footing late into the first episode.

The most ambitious series in Syfy history? Well, among the many Syfy original series of the past the Battlestar Galactica remake is really the only one The Expanse has to surpass to take that title.And even as I wrote this sentence just now, Syfy announced a series from Battlestar executive-producer David Eick based on the Nebula Award-Winning novel Gateway by Frederik Pohl. The winds of change may be coming to Syfy. Good or bad, that is a lot better than any sort of wind filled with sharks. 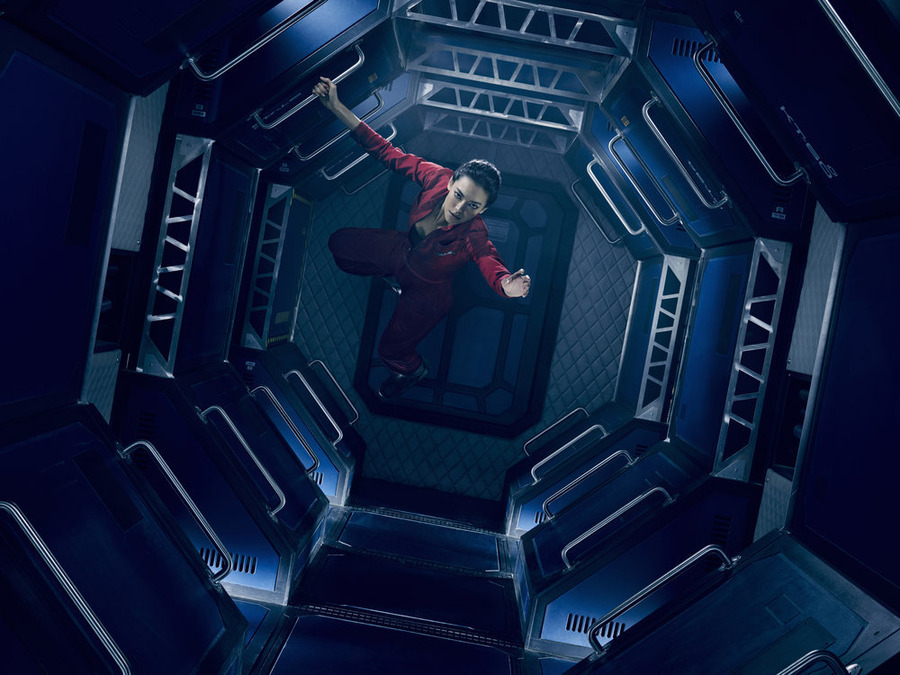