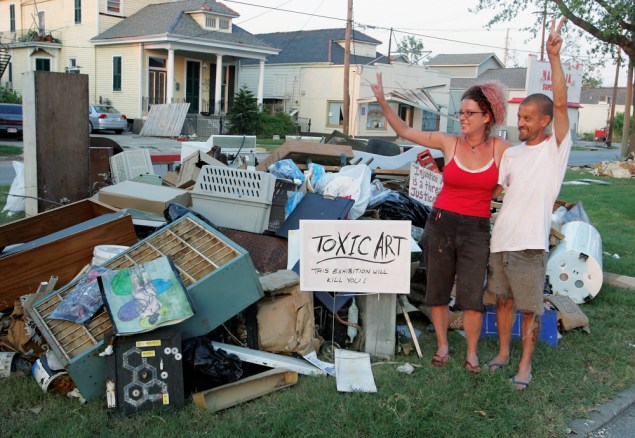 Artist Andrea Garland and her husband, artist Jeffrey Holmes, wave to passers-by
as they pose by their display of damaged artwork in 2005. (Photo by Ethan Miller/Getty Images)

For a time after Hurricane Katrina, there was discussion of whether or not to rebuild New Orleans, worry that it would be forever prone to catastrophic flooding. Ironically, perhaps, that contemplation of abandonment brought forth a great deal of sympathy for the city and its distinctive culture around the country as well as new interest on the part of visitors who wanted to see “what was so special about the place,” said Alan Gerson, a New Orleans painter.

Ten years ago this month, Hurricane Katrina took its toll on Mr. Gerson’s life and work, as there was six and a half feet of water in his studio following the breaching of the levees, resulting in the destruction of five paintings. However, another 30 paintings were only damaged (“Down here, we call the water marks ‘Katrinapatina,’ ” he said), and he has stamped all those works on the back with the letter “K” to indicate which pieces had suffered. That actually proved to be a selling point. Sales were off for a time, he said, but not nonexistent, in part due to galleries that exhibited and now continue to sell his work in Pasadena, Calif., and Santa Fe. “I called people up, and they all wanted to help,” he said. “I said, ‘Take these things, and pay me when you want.’ ” Only one of the buyers asked for a discount.

A decade on, New Orleans has bounced back, although the city continues to show signs of the Old Testament-style beating it took. First, there was the hurricane, then the recession in 2009 and, in 2010, the BP Deepwater Horizon oil spill. For a city reliant on tourism and conventions for its revenues, this represented a triple whammy. Long-time residents differ on which catastrophe was worst for them. The recession and its lingering impact continues to take its toll on many artists, while for businesses the oil spill in some ways was the most damaging, since vacationers associate New Orleans with its cuisine and many were fearful of eating seafood. Hurricane Katrina was just the most visible calamity, and there remain people who were displaced from their homes and never fully resettled, and some of the most heavily damaged parishes have not been redeveloped. Additionally, the population is smaller than a decade ago, at approximately 350,000-400,000, down from half a million. 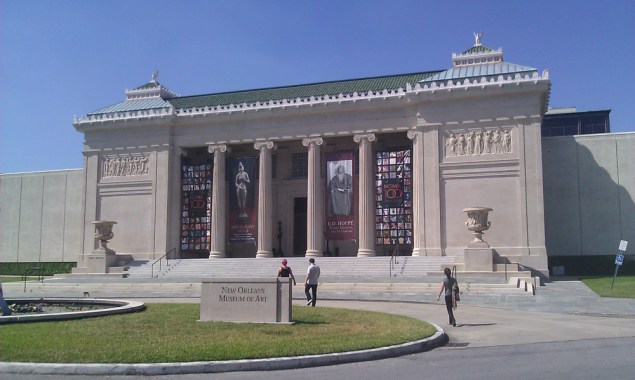 On the other hand, the number of visitors to the city reached 9.5 million in 2014, close to the 2004 high of 10.1 million, and they are spending more these days—$6.8 billion last year, compared to $4.9 billion in 2004. “Visitors here are staying longer and not just going to the French Quarter,” said Kristian Sonnier of the New Orleans Convention and Visitors Bureau.

Also on the plus side, the infusion of federal aid helped rebuild many homes and other buildings, and the federal oversight of that spending limited corruption, an endemic problem of Louisiana governance.

So, the last 10 years have been filled with unevenly distributed highs and lows for the City of New Orleans in general and for its fine arts scene in particular. Katrina’s hardest blow was to art and antiques galleries located in the famed French Quarter, which saw tourism and convention bookings drop by 90 percent for the two years following the hurricane. “For 2006 and ’07, no one stopped by, no one walked in,” said Angela King, owner of a French Quarter gallery 75 percent of whose clients are out-of-state visitors. “The only people on the street were doing recovery and reconstruction work.” 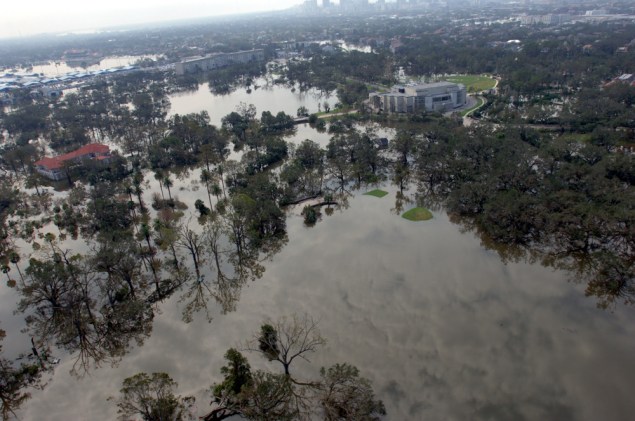 But galleries in the Garden and Arts/Warehouse districts traditionally relied more on local and regional collectors than on tourists and convention visitors, and many of these locals—wallets thick with insurance claim settlements—went in search of new artworks to replace what had been damaged in their homes by the storm. November of 2005 to April of 2006 was one of the Cole Pratt Gallery’s best periods ever, and gallery owner Arthur Roger claimed that his volume of sales now is double what it had been pre-Katrina. Another dealer, Denise Berthiaume, who recently sold her LeMieux Galleries and works there now as a consultant, also said that “People were replacing things, and people all over the country were trying to be supportive of our artists.” In addition to selling art, the gallery also offers conservation services, which did great business with those collectors seeking to salvage water-damaged pieces.

Perhaps the most notable accelerant to the fine arts recovery was the creation of Prospect New Orleans, a now-triennial exhibition that was specifically conceived as a way to restore luster to the city’s fine arts scene after Hurricane Katrina. The first, and possibly the most talked-about of these art events—called “Prospect. 1”—took place during 11 weeks between late 2008 and early 2009, displaying the work of 80 artists from 24 nations in 24 venues. It drew 40,000 visitors. “Prospect. 2,” in 2011-12, was smaller, but the most recent incarnation (2014-15) drew 100,000 visitors to see the work of 61 artists at 18 sites, according to Brooke Davis Anderson, organizer of Prospect New Orleans. (The next event in the series, Prospect. 4, will take place in 2017, which also happens to be the city’s tri-centennial.) “A lot of artists came to ‘Prospect. 1,’ fell in love with the city and stayed,” she said. “They loved New Orleans, and they also loved the fact that houses are affordable here, the overall cost of living so much less than elsewhere. There are a lot of people with New York accents.” 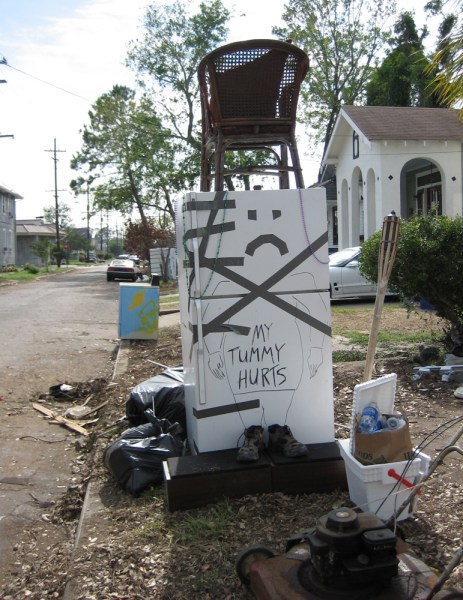 One of those recent transplants is Andrea Andersson, a New Orleans native who since 2001 had worked as a curator and taught at New York University and Barnard College. She was hired last fall as chief curator of visual arts at Contemporary Arts Center New Orleans. “Even five years ago, I wouldn’t have thought about moving back to New Orleans, because there weren’t professional opportunities for me to fulfill my ambitions,” she said. “But this New Orleans is not the same city I left years ago, and I am quite grateful. It is more vibrant and alive, and I am part of a team that is radically altering what the Contemporary Arts Center does.”

The New Orleans Museum of Art was affected by Hurricane Katrina in two ways. Although the institution is elevated and sited on high ground, and its permanent collection sustained no damage, its building and sculpture garden suffered $6 million in damage from the storm, forcing it to close for seven months and lay off more than 80 members of its 96-person staff. The sculpture garden did not reopen for another three years after sustaining damage in yet another hurricane.

Reliant on largely local families for memberships and tourism for visitors, the museum’s revenues plummeted, which the recession and BP oil spill prolonged. However, according to Susan Taylor, the museum’s director since 2010, today the “museum not only is thriving, but is a more resilient institution,” she said, pointing to visitorship of 232,000 in 2013, a 40 percent increase over the preceding year and a post-Katrina record. A grant set up as part of the settlement with BP has helped the museum increase its visibility to out-of-state visitors. “Over the last two years operating revenue and support has increased 28 percent largely due to increased admissions, memberships, fundraising events and grant awards from local and national foundations,” she noted, adding that “member households have grown over 50 percent since 2012.” 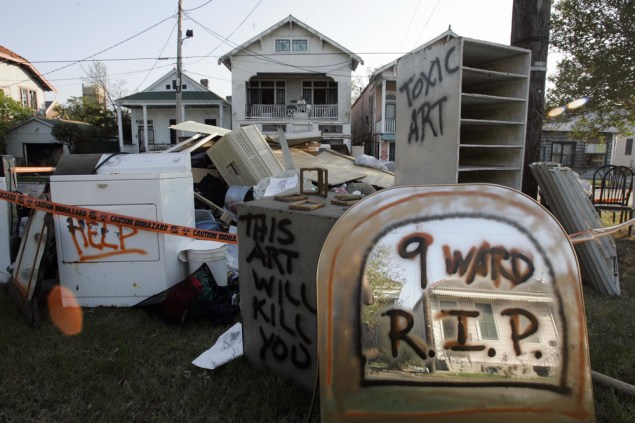 The hurricane provided a mini-boom in sales for plein-air painter Phil Sandusky, who created a series of 40 paintings based on the devastation around the city. The paintings depict “houses sitting on top of cars, houses sitting on top of other houses, sailing boats on top of each other,” he said. “It was terrible, but I found it incredibly beautiful.” Those paintings were exhibited at the Cole Pratt Gallery in January 2006, and “they sold like hotcakes. It was the most successful series I ever did.” In 2007, that series of paintings were published in a book, Painting Katrina, which also sold well.

As the demographics indicate, many people left New Orleans after the hurricane and did not come back. Some did come back, however. Evert Witte, a painter who lost his home and studio (including 30 years of artwork) in the hurricane, got “tired, sleeping on other people’s sofas” and moved with his wife, Sandra Clark, a photographer, to Amagansett, N.Y. At the time, he said, “there’s no way we can go back,” but two years later they did, buying a new house in the city and resuming their art careers there. Similarly, painter Leslie Staub left New Orleans for Durham, N.C., but returned. Her paintings celebrate Southern culture and icons, her dealer, Denise Berthiaume, said. “This is where she belongs.”

For long-time residents, some changes take time getting used to. “There is less of a New Orleans look to a lot of the new artwork you see in the galleries—I hate to use the word ‘regionalism’—and a lot of it looks like it could have been produced anywhere,” said Arthur Roger. “I guess that isn’t all bad.” 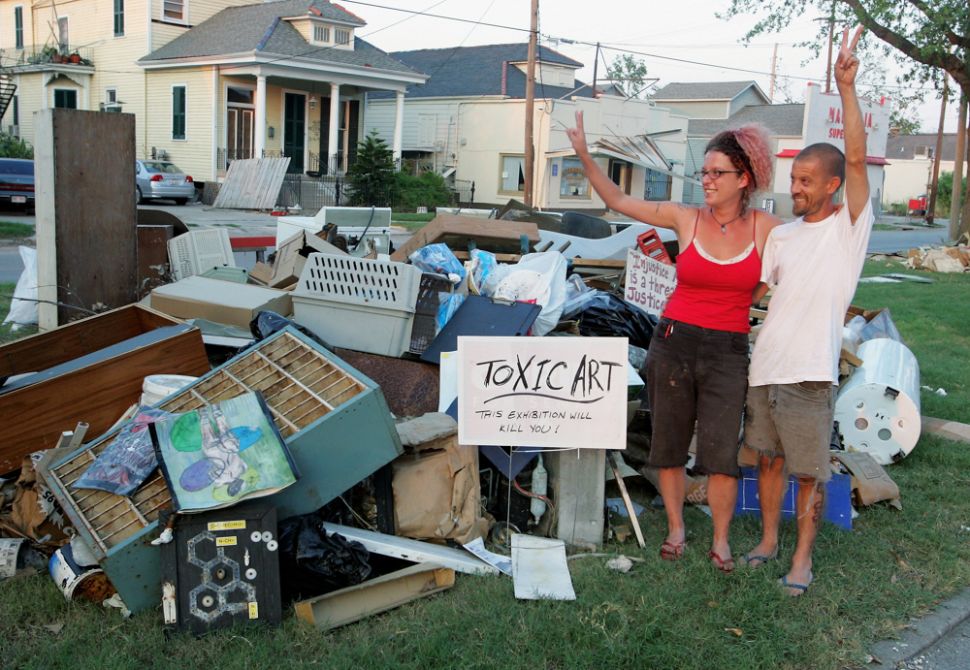