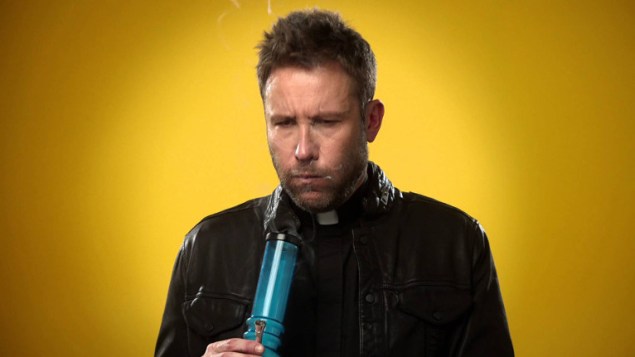 Michael Rosenbaum went from portraying the follicle-ly challenged Lex Luther on the drama Smallville to the role of a small time crook pretending to be a church leader on the new TV Land comedy series Impastor—not a path that seems like a natural transition for any actor.

Impastor follows Buddy Dobbs, a gambling addict who, fleeing the police and a loan shark looking to collect, ends up stealing the identity of a gay pastor in a local small-town community.

“Well, when I was little my grandmother always said I was funny so I knew I had it,” says Rosenbaum with a slight laugh. “The truth is I was a small kid. I never went to a school dance or anything like that. I was really a total ‘nerdstradomist,’ and yes, that’s a word. That’s my word for what I was. Here’s how nerdy I was—I would tape Saturday Night Live and then I would do impressions of all the characters that I thought were really funny for anyone that would listen. Well, as you would suspect, some people thought I was just really weird.”

Rosenbaum sums up this period in his life by surmising, “I think I was just like a lot of kids in that I didn’t know where I was supposed to be or who I was supposed to be so I just tried to be funny because I knew that if you made people laugh they sort of liked having you around.”

When he started out as an actor, Rosenbaum did land several comedic roles, most notably in the WB series, Zoe, Duncan Jack and Jane. He laughs as he remembers, “Sara Rue was with me on that series all those years ago and now here we are working together again on Impastor. That’s one of the cool parts of this business, that 15 years later I’m reunited with someone that I loved working with and we get to do it again.” (Rue plays the church secretary on Impastor.)

After Zoe, Duncan, Jack and Jane was canceled, Rosenbaum landed his role on Smallville, something that was a bit shocking to him. “I’ll admit that it was kind of a scary time for me. I shot the pilot and then my friends were like, ‘you’re playing the evil genius? You’re an idiot and not really scary,’ and I started to believe that. I thought, ‘oh God, they’re going to fire me. I’m so out of my element. I’m so uncomfortable when I have to be serious.’ I’d always wanted to do comedy. I’m absolutely grateful to have done Smallville and to have been able to be a part of that, but I just love doing comedy. It feels more natural to me.”

For his role in the Superman inspired series, Rosenbaum had to make big changes in his life. “When I got the role, I was like any actor and just really happy to be on a show, but at the time what I didn’t know was that I was going to end up having to be bald for seven years, and live in Vancouver for seven years, playing this dark character that had no hint of levity about him.”

After his stint in the hour long drama, Rosenbaum knew that he would have to reestablish himself in the comedy world if those were the type of roles he desired. “First, I needed people to see me with hair because they weren’t use to that and then I had to show them that I’m not just this evil villain type actor and that I’m capable of playing all kinds of other roles. So, I was constantly selling myself.”

When the opportunity for Impastor came along, Rosenbaum loved the concept and thought the role was perfect for him, but he was a little reluctant to sign on for one reason. “I admit it, I said, ‘TV Land, really? They show Golden Girls reruns and shows like that. Now don’t get me wrong, I love The Golden Girls, I really do, I can sing the whole theme song, but I wasn’t sure if Impastor was going to be a good fit for the network.”  His hesitancy soon disappeared as he learned that TV Land wasn’t going to shy away from the crass tone of the series. “They didn’t change any of the dick jokes or any of the other stuff that I thought they might. When they showed that they were committed to keeping the dark comedic tone of the series intact, I knew we were going to make something that I would love doing, and I absolutely do.”

To further prove his point about committing to comedy, and to also demonstrate that he does, in fact, know all the words to The Golden Girls theme song, Rosenbaum suddenly launches into a rousing rendition of the tune, something Lex Luther certainly would never do.

As he cheerfully sings the words to the ditty in such a manner than you can’t help but laugh and join in, it’s clear that Rosenbaum has used his years as a  ‘nerdstradomist’ impeccably and is absolutely doing the thing that he should be, and doing it perfectly. 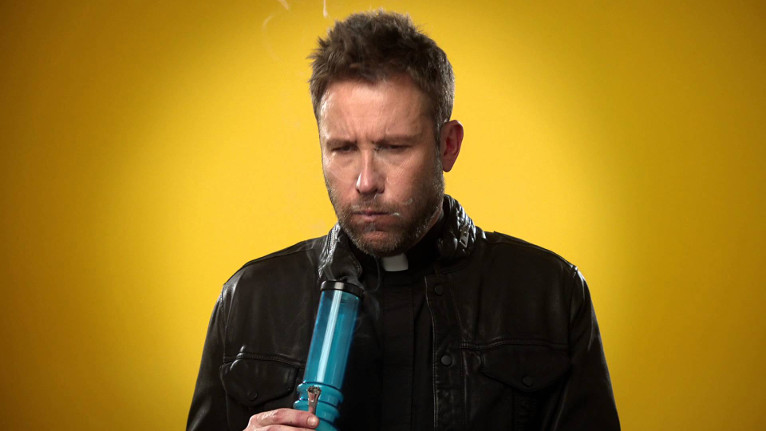